Is Erdogan's refusal to resign as PM unconstitutional?

President-elect Recep Tayyip Erdogan's refusal to leave the prime minister’s post is widely seen as a flagrant constitutional breach, amassing potential legal troubles for him in the future. 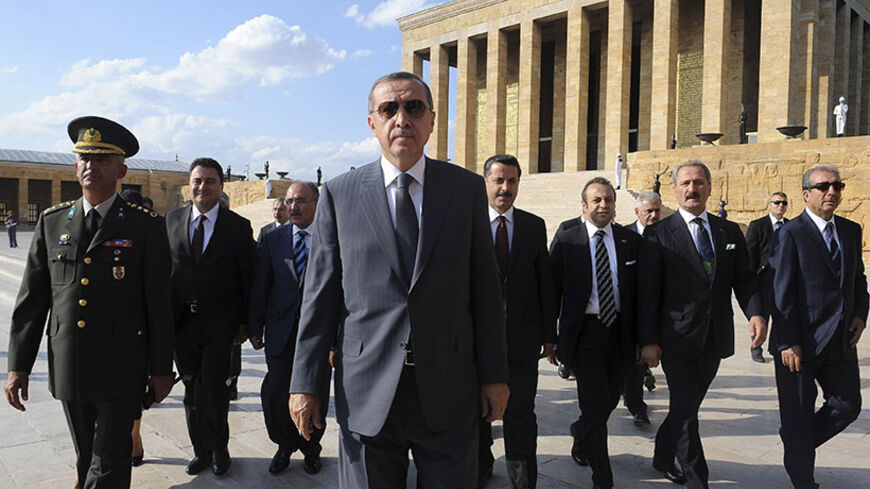 In the late 1990s in Turkey, Sami Selcuk was a name synonymous with the notion of “law.” President of the Court of Appeals, one of Turkey’s two top judicial posts, he developed a reputation for his unorthodox and progressive views, which he used to assert in speeches at annual ceremonies marking the inauguration of judicial terms.

In 2001, after Selcuk’s retirement, Recep Tayyip Erdogan and other principal founding fathers of the Justice and Development Party (AKP) invited him to join them. Selcuk turned down the invitation, but nevertheless remained a revered figure in legal affairs and always a respected source of reference.

A few days ago, Selcuk captured public attention when he declared that Erdogan’s tenure as Turkey’s prime minister had ended on Aug. 15, the day the Higher Electoral Board (YSK) formally announced him as the winner of the Aug. 10 presidential elections. Selcuk insisted that until Aug. 28, the day Erdogan would be sworn in as president, the country would be in a transitional phase and an acting prime minister should be appointed to take over the post that Erdogan should vacate.

Stressing that jurists should always stay “objective,” Selcuk added: “I had disagreed also with the jail term Erdogan was given [in 1998] for reciting a poem. I even wrote a booklet on the issue, for which he called to thank me. Later, they wanted to have me in the founding of the party. Today, I am astonished. He has so many jurists around him in the party, including people who may have graduated with honors from the law faculty. Aren’t they cautioning him today? A jurist is supposed to have one opinion on a given issue. It cannot change according to who holds the government and the power.”

The basis for Selcuk’s argument that Erdogan cannot remain prime minister until Aug. 28 is Article 101 of the Turkish Constitution. The last paragraph of the article reads, “If the President-elect is a member of a party, his/her relationship with his party shall be severed and his/her membership of the Grand National Assembly of Turkey shall cease.”

And what marks formally the “election moment” for Erdogan? The view, shared by Selcuk and other prominent Turkish jurists, is this: Under Articles 101 and 102 of the constitution and Article 20 of the Presidential Election Law, the moment the YSK formalizes the election outcome is the moment that marks the formal election of the winning candidate. As a result, Erdogan’s mandate as prime minister comes to an end and his relationship with his party is severed. The date this happened was Aug. 15 when the YSK formally announced the election results.

Ibrahim Kaboglu, a renowned jurist who chairs the constitutional law department at Marmara University’s Faculty of Law, went a step further, arguing that Erdogan’s failure to leave the prime minister’s office in the Aug. 15-28 period would amount to a “constitutional coup.” Kaboglu warned, “This would mean a kind of a constitutional coup, a suspension of the constitution and the country ushering into an interim regime until Aug. 28.”

In an Aug. 18 interview with the BirGun daily, Kaboglu said that with the YSK’s formal announcement of the new president, Erdogan’s parliamentary membership had legally come to an end automatically, terminating also his mandate as prime minister. If Erdogan insists on carrying on as prime minister, Kaboglu said, his actions would amount to de facto actions, which are null and void. Warning that Turkey was facing a risky and perilous period, Kaboglu said, “We may end up missing even the 1982 Constitution which we so much criticize.” He was referring to Turkey’s incumbent constitution, the legacy of the three-year military regime that followed the 1980 coup, which remains under criticism even though more than a third of its original version has been amended over the years.

Among the jurists who share the same view, one stands out: constitutional law professor Ergun Ozbudun, who has served almost three decades as Turkey’s representative on the Venice Commission, a respectable legal body attached to the Council of Europe and, even more importantly, who was tasked by Erdogan in 2007 to draft a new constitution for Turkey. Ozbudun, too, argues that Erdogan staying on as prime minister from Aug. 15 to Aug. 28 is against the law. “The decrees that Erdogan submits as prime minister during this period could later become the subject of court action and end up being annulled,” he said. “If the decrees he signs are taken to court and eventually annulled, there will be nothing to do.”

Thus, all actions Erdogan undertakes until Aug. 28 could end up being legally null and void.

An interesting interpretation came also from Zafer Uskul, another prominent constitutional law expert and a former AKP lawmaker who chaired parliament’s human rights commission from 2007 to 2011. “Erdogan can no longer be a prime minister because his parliamentary membership has come to an end,” he said.

In remarks carried by the Taraf daily, Uskul said: “Erdogan has been elected president and his certificate of election has been submitted to the parliament speaker. Thus, he is now the president-elect. If the president-elect is affiliated with any party, this relationship comes to an end immediately and so does his parliamentary membership. The constitution also stipulates that the prime minister should be designated from among parliament members, meaning that a person who is not a parliament member cannot be appointed as prime minister, either. The moment the YSK announced Erdogan’s election as president, he could well have appointed an acting prime minister and left the post.”

Turkey appears faced with a new “legal chaos” as Erdogan is staying on as prime minister and AKP chairman while he waits to assume the presidency and usher in the extraordinary convention the AKP will hold on Aug. 27, only a day before Erdogan takes over as president.

Attila Kart, a jurist and a parliament member for the main opposition Republican People’s Party (CHP), petitioned the chief prosecutor of the Court of Appeals on the issue. He argued that under the Political Parties Law and its own statute, the AKP was required to elect an acting chairman in 10 days at the latest and that the acting chairman was then required to take the party to a general congress in 45 days. Kart’s legal action could eventually lead to a petition to the Constitutional Court and the annulment of actions Erdogan takes as prime minister after Aug. 15.

Erdogan’s response to the debate sparked by this “legal chaos” was a colloquial “Mind your own business.”

The trump card Erdogan has against the arguments of authoritative constitutional law scholars is the Official Gazette’s failure to publish the YSK’s Aug. 15 announcement. Kart argued that the prime ministry itself obstructed the publication, which was in itself another constitutional breach, and filed a criminal complaint.

Turkey already has too many headaches and, given the balance of power, the present “legal chaos” may not stop the steps Erdogan is determined to take. Yet, violations of the constitution may haunt him in the future and have a boomerang effect the moment his power somewhat weakens.