Alarm grows in Turkey over the government’s intentions after a sixth extension of the state of emergency, declared over the 2016 coup attempt. 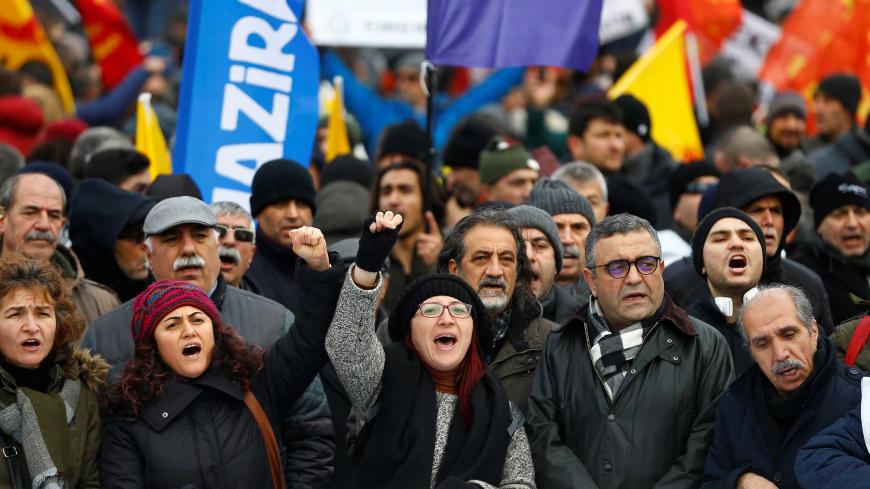 Demonstrators shout slogans during a protest against the government's plan to extend the state of emergency imposed after the 2016 coup attempt for another three months, Istanbul, Turkey, Jan. 14, 2018. - REUTERS/Osman Orsal

Turkey’s government has extended the state of emergency for another three months — the sixth extension since the failed coup attempt on July 15, 2016. The opposition is alarmed that the government plans to stick to emergency rule through crucial presidential polls scheduled for next year and has moved to galvanize the streets.

The government justified the extension using the same reason it did for the initial declaration of emergency rule — the threat of terrorism — but the opposition and legal experts are unconvinced.

Senal Sarihan, a lawyer and deputy for the main opposition Republican People’s Party (CHP), believes the government is exploiting the putsch. “Even the initial declaration of the state of emergency rested on a [legal] violation,” she said. “Extraordinary regimes can be declared only in case of widespread violence that cannot be contained. The coup attempt of July 15, 2016, unfolded [only] in Ankara and Istanbul and was thwarted in six hours at most.”

She noted that security forces and the judiciary remained functioning at the time and could launch normal judicial procedures against the putschists. “Yet the government declared a state of emergency the following day, and thus the legal violations began with the declaration itself,” Sarihan said. According to her, the continued emergency rule has created a de facto presidential system and perpetuated President Recep Tayyip Erdogan’s one-man rule.

Another CHP deputy, Necati Yilmaz, believes Erdogan and his Justice and Development Party (AKP) have no intention of lifting the emergency rule, which grants them extraordinary powers that they have routinely used for legislative decrees and restrictions unrelated to the coup attempt or that had nothing to do with security at all. "The emergency rule is no different from the one-man regime that the AKP has envisaged,” Yilmaz told Al-Monitor. “They want to have it through their current term in power. This intention is plain as day.”

According to the opposition, the AKP is planning to stick to the state of emergency up until November 2019, when Turkey is scheduled to go to the polls to elect its first executive president — who will officially assume the sweeping powers approved in a controversial referendum in April 2017. Some believe the government could opt for early elections this year.

Ayhan Bilgen, a lawmaker and spokesperson for the pro-Kurdish Peoples’ Democratic Party (HDP), told Al-Monitor, “They will first decide the election timetable, and then the duration of the emergency rule will become clear. Their practices are typical of a party state. … The AKP is after designs to guarantee [the outcome of] the elections by making sure they are held under emergency rule.”

According to Ahmet Faruk Unsal, a former AKP deputy who has fallen out with his party, the AKP needs the state of emergency to prevent the eruption of “great chaos” of governance after its massive violations of the law since the coup attempt. “Lifting the state of emergency will make it impossible for them to govern Turkey. The laws and the constitution have been violated so much that they will face great chaos as soon as all those legislative decrees become invalid once the state of emergency ends,” Unsal told Al-Monitor. “They are at a loss about how to handle that. They would face the legal sanctions of trampling on the constitution and the law, and this would be an unsustainable situation.”

The YSK’s composition is of utmost importance for the government. With its controversial decisions at the April 2017 referendum, the YSK swayed the outcome of the tightly contested vote. But not only that: By using emergency rule powers, the government has routinely banned demonstrations and other activities by the opposition while enacting a provision widely seen as a judicial shield for AKP loyalists. This has further stoked apprehension ahead of the elections.

For Bilgen, the state of emergency is “a very serious threat” to election security. “Reports [by international observers] on the April [2017] referendum, which took place under a state of emergency, describe violations of transparency and equality norms, and there are already signals of serious risks [for the upcoming elections],” Bilgen said. He voiced concern that the government would flout electoral laws — especially during voting and counting — and impede any real monitoring and legal control.

Despite numerous bans and restrictions, opposition parties and civic groups have launched initiatives calling for an end to the state of emergency. Unsal, who is part of the Initiative Against State of Emergency, a platform that brings together prominent politicians and intellectuals, says opposition parties should refuse to run in any elections under emergency rule. “If political parties refuse to contest the elections, the government cannot have those elections recognized by the international community,” he said. “The parties’ refusal to participate will mean a crisis of legitimacy.”

The HDP appears to agree with the idea. “A question of legitimacy will inevitably arise over an election held under a state of emergency,” Bilgen said. “Our position here does not mean an adverseness to elections; on the contrary, it is about the need to start questioning the minimum conditions that proper elections require.”

When it comes to the CHP, the main opposition has not yet made a decision on whether to contest the election, Yilmaz said. "The April [2017] referendum has already demonstrated the dubious nature of elections held under a state of emergency. There is no need to repeat that,” he said. “Both in our parliamentary activities and street actions, ending the state of emergency is our No. 1 demand.”

Bilgen called for a “strong, broad and inclusive” popular movement to pressure Ankara. “Despite all restrictions, society must demonstrate that it cares for its future,” he said. “This, in fact, is a question of deserving democracy.”

A number of civil society groups have already taken to the streets. Most recently, thousands of people attended a Jan. 14 rally in Istanbul, organized by the Confederation of Public Sector Trade Unions (KESK).

KESK co-chair Mehmet Bozgeyik vowed the street action would continue. “The Turkish people believe the state of emergency is no longer needed and want an immediate return to democratic politics,” Bozgeyik told Al-Monitor. “As a confederation [of trade unions], we are demanding the restitution of public workers expelled via legislative decrees and the withdrawal of hundreds of legal amendments enacted during this process.”

Such appeals have so far fallen on deaf ears. The government’s rhetoric paints the prospect of an open-ended state of emergency, insisting that ordinary people are not being affected. Yet the CHP’s Sarihan, who has penned a book about the 18-month toll of the emergency rule, offers the following overview: “The number of people expelled from public service is 125,294. They are without salaries, unable to get health services and earn their bread. In legal jargon, we call this ‘civil death.’ Then, 50,510 people have been arrested and 169,000 people have been subject to legal proceedings. Including families, this means ‘civil death’ for more than 1 million people. Six news agencies, 50 newspapers, 18 television channels, 29 publishing houses, 20 magazines, 22 radio stations and 1,528 associations have been banned. One hundred and forty-five journalists have been arrested, and 2,500 journalists have been left jobless because of the closure of media outlets. Ten members of parliament have been arrested.”