How Islamic will Erdogan’s presidential system be?

As the presidential system looks more probable than ever, Turkey’s pro-government pundits are looking for references for it within the Islamic tradition. 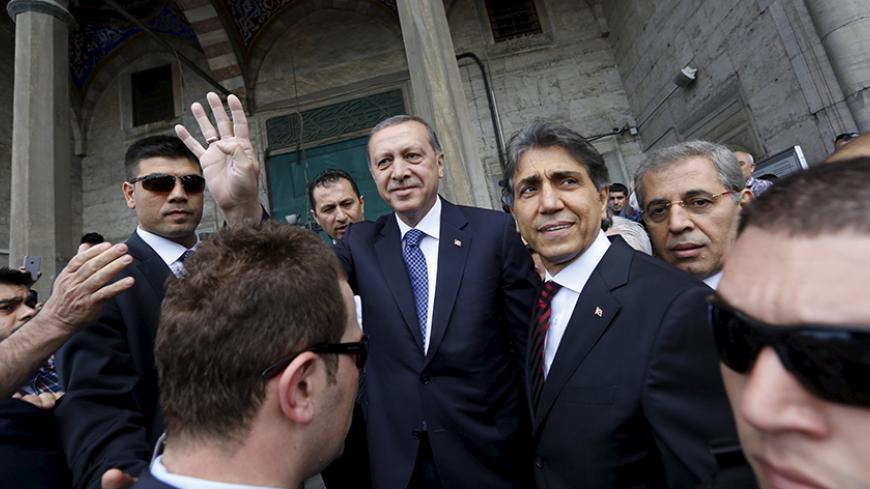 Turkey's President Recep Tayyip Erdogan (C) greets his supporters as he arrives at a mosque for Friday prayers in Istanbul, May 29, 2015. - REUTERS/Murad Sezer

With the recent political agreement between Turkey’s ruling Justice and Development Party (AKP) and its newfound ally, the Nationalist Movement Party (MHP), Turkey is quite close to President Recep Tayyip Erdogan’s much-aspired presidential system. Most likely, the parliament will vote for a major constitutional amendment in early 2017. A subsequent referendum, probably in April or May, will give the people the final say. Nothing is certain, but given Erdogan’s broad popularity, a “yes” vote in such a referendum seems likely.

The technicalities of such a major transformation are a story in itself. For outside observers, however, a more curious question may be the historical meaning of this major change. Given Erdogan’s roots in political Islam and the Islamist themes he has increasingly used in recent years, many would wonder whether the presidential system would be the end of the secular Turkish Republic. They would wonder, in other words, whether Turkey would become an Islamic Republic.

The answer is more complex than it may seem. On the one hand, there is no reason to think that the principle of secularism, which has existed in the Turkish Constitution since 1937, can be taken out and Islam introduced as a state religion. The AKP never advocated such a radical revolution, and when its parliament speaker suggested it in passing last year, Erdogan disapproved of the idea, defending a religion-friendly interpretation of secularism.

Moreover, the presence of the MHP in the constitution-making process further guarantees that the principle of secularism will remain in its place. The MHP is a party that appeals to Turkey’s conservative Sunni masses, but it has had fewer problems with secularism. In fact, the leader of the party, Devlet Bahceli, made it a precondition for talks with the AKP that the republic’s founding principles enshrined in the first three articles of the constitution, which include secularism and “Mustafa Ataturk’s nationalism,” would remain untouched. Current reports show this precondition has been observed.

Therefore, if you think that Erdogan’s presidential system will come with a proclamation of an Islamic Republic of Turkey, then don’t. This is not going to happen.

On the other hand, however, there are many signs showing that Erdogan’s supporters see the presidential system as an implicit realization of an Islamic ideal.

This was made clear first by Hayrettin Karaman, a professor emeritus of Islamic law, a columnist for daily Yeni Safak and a key religious authority in the AKP universe. In a December 2015 article, he wrote that the “Islamic system [of governance]” is similar to the presidential system. “The people elect the president [the caliph, the emir] and give him bay’ah [allegiance],” Karaman explained, “and the president appoints the government and the high bureaucracy.” On a positive note, he added that in this Islamic system, the president couldn’t interfere in the judiciary and the legislation.

In the face of such frequent references to Islam in defense of the presidential system, Mehmet Ocaktan, a rare critical voice in the pro-government media, objected. It was wrong, he wrote in daily Karar, to discuss the political system “by associating to it a sanctity that it does not deserve.”

The most significant argument in this line came from Musa Kazim Arican, another pro-government academic, who wrote a lengthy article in daily Yeni Safak titled “The Presidential System According to Islamic Thought.” Accordingly, Islam’s ideal president is a “man who possesses all the virtues,” and who “positions each and every individual and group within the state, establishing a system of governance and work among them.” This all-virtuous man could be called the “Doctor of the World,” because he would heal all the ills of society. He would even “give life to man, breathe to him a soul, and herald a new resurrection.”

Arican envisioned this almost-sacred president as an Islamic notion, by giving references to medieval Muslim thinkers such as Abu al-Nasr al-Farabi, Abu al-Hasan al-Mawardi and Nasir al-Din al-Tusi. Little did he realize, though, that the “Philosopher King” idea that fascinated these ancient scholars was a product of not the Quran, but of Greek philosopher Plato. Unlike Aristotle, who developed a more pluralistic political vision, Plato was distrustful of democracy and preferred an all-wise king to rule over a misguided society. That is why Karl Popper, the great liberal thinker of the past century, had criticized Plato as the first enemy of an “open society.”

To conclude, I can say that it is only natural for Turkey’s religious thinkers to look back at their tradition to develop a political vision for the future. Yet they should do this not to serve the current needs of mundane politics, but rather to constrain it with time-honored moral principles.

They should also realize that the key value of Islam’s political tradition is what writer Hayrettin Karaman mentioned in passing in 2015 — and what I emphasized back in 2013. It is the “separation of powers.” It is, in other words, creating clear boundaries between the executive, the legislation and the judiciary. The most troubling aspect of Erdogan’s envisioned presidency is not that it may be too Islamic in that regard. It may rather be too Platonic.