The widely respected Hayrettin Karaman, a key supporter of Turkey’s ruling Justice and Development Party, has openly criticized the ruling elite as corrupt. 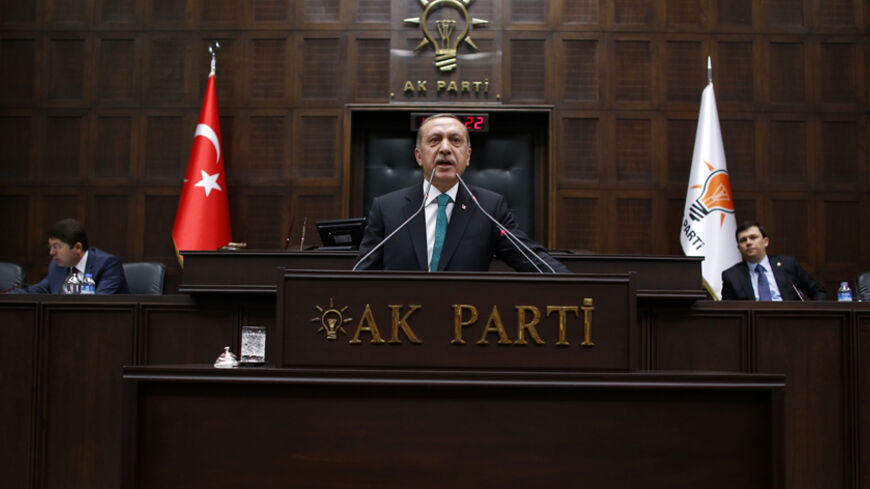 Turkey's Prime Minister Recep Tayyip Erdogan addresses members of parliament from his party during a meeting at the parliament in Ankara, Jan. 14, 2014. - REUTERS/Umit Bektas

Turkey’s ruling Justice and Development Party (AKP) is officially a secular entity, as Turkey's constitution requires of all political parties. However, it has become clear over the years that there is an informal religious guidance that the party leadership, especially President Recep Tayyip Erdogan, subscribes to. Views or “fatwas” from some trusted Islamic scholars help guide some of its policies.

The most notable figure among these guiding Islamic scholars is Hayrettin Karaman. He is a professor emeritus of Islamic law and a columnist for the daily Yeni Şafak, a prominent newspaper in the pro-Erdogan media. Karaman was recently criticized for issuing a "fatwa" that allegedly was used to justify corruption. (Reportedly, he had given the green light for the government to "encourage" the businessmen who won state contracts to make donations to certain charitable foundations that have ties to the government.) But last week, Karaman wrote two pieces in Yeni Safak in which he openly criticized corruption within the ruling AKP and called for the “moral” people in the party to take precautions.

In the more explicit piece, headlined “The AKP’s morality test,” Karaman classified the AKP's ranks. Accordingly, both at the ground level and among the executives of the party, there were “virtuous” people that Karaman fully trusted and respected. But there were two other types as well:

He noted, “These [interest-seekers] block the way of the virtuous people in the party organization, municipalities, bureaucracy and business world, promoting their own collaborators. If they are loose in their religiosity, they take interests without caring whether they are 'halal' or 'haram.' Those who are relatively more religious do the same thing, by making things fit into the letter of the law.”

Karaman's words have been widely quoted in the Turkish press, marking a change from claims of corruption in the ruling party being treated as “libel,” as the AKP spokesmen sometimes claim, to a bitter fact acknowledged by one of the key supporters of the government. They were also noted, rightly, as a product of Karaman’s honesty.

However, with all due respect to that honesty, the diagnosis Karaman offered was not compelling, because he faulted democracy itself. After noting the moral problems among Turkish people, he wrote:

“Democratic politics is made not just with the elite but the people. That is why a French academic called democracy ‘the worship of the lack of merit.’ I know and understand that the job of the virtuous executives is very difficult because of this problem with democratic politics. But still I have a wish: Let those people of virtue, of which I have no doubt, initiate a campaign for ‘morality, competence and merit,’ and let them establish these criteria. May God help them!”

The trouble with these well-intended words is that they presume the existence of “virtuous executives” over a herd of immoral people. (They also sound a bit Platonic, in the sense of seeking to establish justice under the guidance of a “philosopher king.”) However, while the importance of leadership cannot be understated, political history shows us that corruption can be minimized only by transparency and accountability, an independent judiciary and a free press — in other words, a liberal democracy.

No wonder in that the world corruption index, the countries that fare best are unmistakably liberal democracies. The top country in the list — the cleanest — is Denmark, whereas the worst — most corrupt — is North Korea. In this year's index, Turkey scored 64th among 175 countries, with a dramatic decline from 2013, when it was the 45th country on the list.

In other words, while Karaman’s frank critique of corruption in Turkey should be appreciated, the solution lies in something more systemic than merely empowering the “moral people” he finds trustworthy. Because, in fact, humans are not that clearly divided between the fully “moral” and the “immoral.” Rather, similar moral dilemmas exist within most people, and what will elevate us as a society is a political system and culture where power is decentralized, freely criticized and effectively scrutinized.