What is the role of political Islam in the allegations of corruption against the government of Turkish Prime Minister Recep Tayyip Erdogan? 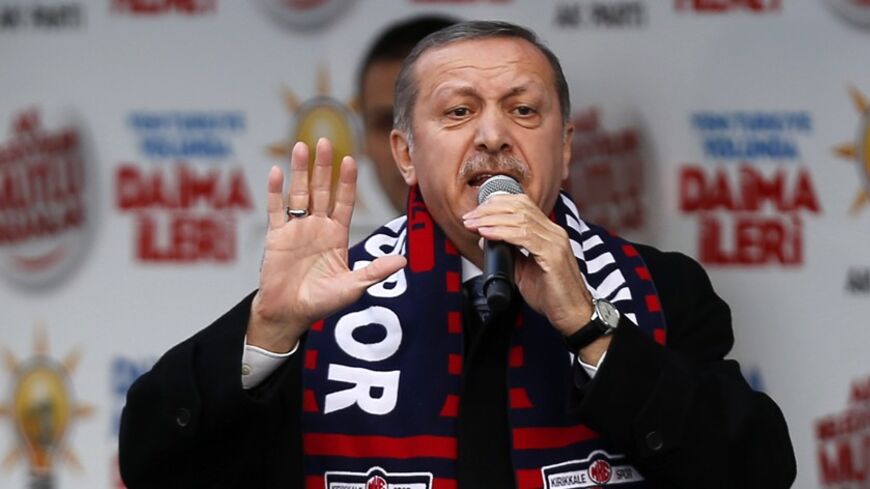 Turkey has been living through extraordinary developments in recent weeks. Almost daily, voice recordings said to belong to the prime minister, his relatives or ministers spill onto the Internet.

In these recordings, momentous allegations are heard of the prime minister taking bribes, the prime minister giving instructions to relocate billions of dollars from his and relatives’ residences and contractors who are awarded contracts by the state being required to donate considerable sums of money to a foundation headed by the prime minister’s son.

These tape recordings that appear nearly every day on the Internet, and especially via Twitter, are likely one of the key reasons for the ban on Twitter in Turkey.

Despite all these ominous allegations, there are no mass separations and resignations from the Justice and Development Party (AKP), and the prime minister’s absolute denials of any kind of corruption are hard to overlook.

A debate raging among Islamic ranks brings has brought to light that the prime minister and his government do not consider some of the graft allegations as corruption. For example, in an interview with Al Jazeera Turk, Prime Minister Recep Tayyip Erdogan remarks, “ When you say corruption, what I want to know is whether state funds are being robbed or not.”

This means that for Erdogan to treat the dubious movement of money or designated donations as corruption, the money has to come from the state treasury. If the money comes out of the pockets of individuals, he does not consider it to be corruption. These words could be telling us plenty about the financing of politics in Turkey, political Islam and the AKP mindset that have been ruling Turkey for the past 12 years.

Ali Bulac, an important actor in Islamic movements, recalled the birth of a tradition whose roots go back to the 1990s when Erdogan was the mayor of Istanbul. Bulac said, “In 1996, the question of businessmen doing business with public institutions making donations to various congregations, foundations and associations was on the agenda. According to the prevailing view at the time, a businessman could donate 10% [of an awarded contract] to a designated recipient and there was nothing wrong with that unless coercion was used. Financing was necessary to develop and provide effective services. Donations by businessmen accelerated the services offered.”

Bulac, although not naming names, is alluding to Erdogan’s mayoralty and a "fatwa" (religious decree) that was allegedly issued by Hodja (Muslim scholar) Hayrettin Karaman. It has since been alleged that this had made it mandatory for businessmen receiving contracts to donate to Islamic foundations; these donations had constituted the economic base of political Islam and thus enabled Erdogan and his associates to access colossal amounts of money.

As the allegations intensified and the same religious expert was pointed to as the source of the fatwa, Karaman responded with an article in daily Yeni Safak:

“As some slanderously allege, the prime minister while he was the mayor did not ask me, 'We have to become stronger and achieve our mission. Can we get a commission from the profits of those we award contracts to?' And, I did not answer positively to him or to anybody else.

“Many other people, but not him [Erdogan], asked me, however, whether there could be any objection to guide people who are legitimately awarded contracts by the state or municipalities, and are making profits from them, to contribute to charities.

“My answer was: If those you encourage to contribute to charity are Muslims and if they are the kind of people who would not donate unless you urge them, or if they donate because they are afraid not receiving any more contracts, then it can be a blessed deed. Charities can benefit from such donations because no one can accuse them of forcing anyone or exerting pressure to donate. Moreover, they wouldn’t know if the donor is giving money under pressure.”

Mumtaz’er Turkone of the daily Zaman, however, said what Karaman softly decrees as “can benefit” is the core of the issue of “political Islam” and “corruption.” Turkone wrote:

“Our Hodja says it permissible for those awarded contracts by the state to be compelled to donate to charities even if unwillingly. I think that this 'fatwa' opens a wide legitimate opportunity to those who are trying to find ways to cover up corruption and bribery. Islamic legal experts must answer the following questions: Can linking a contract award to a mandatory charity donation mean that it no longer is a bribe? To exploit public authority to gain interests is not limited only to bribery. If your goal is charity, does that change the nature of the crime? The state is creating rent and some are trying to benefit from that rent through politics. The 'fatwa' of the Hodja [Karaman] then becomes a master key to open all doors. Can you make donations from the rent you collect from the state?"

As such, the charge is that the tradition of collecting donations from businessmen awarded contracts begun during Erdogan’s term as mayor of Istanbul has continued until today and has actually blossomed under his premiership. It is possible that the practice based on Karaman’s 'fatwa' has expanded to other areas. While Karaman sees donations to foundations and real persons as permissible by Islam, as I wrote in an Al-Monitor article published on Feb. 12, it is now claimed that “donations" extracted from businessmen receiving state contracts are now used to buy newspapers and TV stations to serve the political power.

Human rights advocate Omer Faruk Gergerlioglu, a leading figure of the Islamic segment, points to the linkage between corruption and the strategy of political Islam to take over and remain as political power: “Islamists are yearning for power. It is their passion. They are guided by 'let’s rule and never lose power no matter what.' They see staying in the position of the opposition as a disaster. This is one of the key problems of Islamism. True, one way of being powerful is to have money. This is why some people believe that corruption is permissible to achieve power.”

No doubt, the corruption and bribery allegations prosecutors are bringing against former ministers and their relatives have nothing to do with this debate. They are accused of simply trying to score personal gains.

The debate I wanted to outline here shows the complexities of the corruption allegations and the linkages to the culture of political Islam in Turkey.

If the government’s pressure on the judiciary is lifted and corruption investigations make progress, clearly we will be enlightened not only on the economic obsessions of some politicians but on the economic strategies of political Islam.