Trading in political influence is becoming more evident — some would say it's becoming the norm — in Turkey, where all power appears to be in one person's hand. 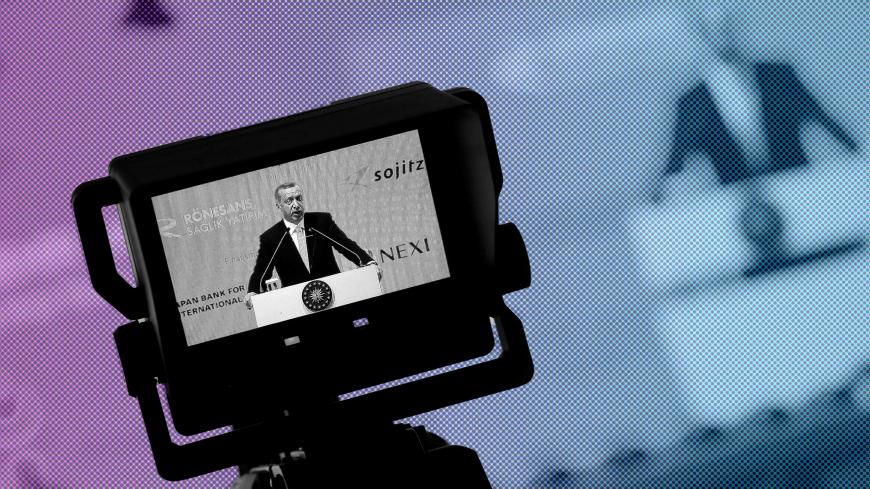 Turkish President Recep Tayyip Erdogan is seen on the monitor of a TV camera as he speaks during a ceremony in Istanbul, Turkey, July 21, 2017. - REUTERS/Murad Sezer

Turkey recently appointed 37 new ambassadors, and this lineup has some atypical players: Five of them are not career diplomats and two are headscarved women. The latter caught the public’s attention.

The ruling Justice and Development Party (AKP) has altered Turkey’s longtime tradition of appointing career diplomats, enabling the government to nominate "outside" civilians without any sort of confirmation process.

The issue is not necessarily about the women's headscarves but rather about their family connections. The ambassador to Kuwait, Ayse Sayan Koytak, is the older sister of Turkey’s Family and Social Policies Minister Fatma Kaya. Kaya’s younger sister, Sumeyye Sayan, made the news in April as an AKP member of the Istanbul City Municipality. Reports connected Sayan to firms that won multiple tenders from the municipality to provide “psychological support services” totaling a hefty yearly income of 2 million Turkish liras ($565,000). The opposition charged that this was unethical, as Sayan is a municipality official.

The second person who wears a headscarf is Merve Kavakci. In 1999, Kavakci was not allowed to take her elected seat in the Turkish parliament because of a secular ban on headscarves. She also lost her citizenship, as she had become a dual US-Turkish citizen without informing authorities. Kavakci regained her Turkish citizenship this year and is now the ambassador to Malaysia. Kavakci’s younger sister has been an AKP lawmaker since 2015.

With the nomination of these two women, the importance of family ties in building a career in Turkish politics and bureaucracy has become a topic of discussion. A rhetorical but bitter question in Ankara among opposition figures is: What is the probability of becoming an ambassador if your sibling is from the AKP?

On Transparency International’s 2013 Corruption Perception Index, Turkey ranked 53rd among 175 countries — the lower the number, the better. In 2016, it fell to 75th place among 176 countries.

In 2016, according to Transparency International findings and the polling of 2,000 people by the research firm Ipsos Group, 55% of the respondents believed corruption had increased in Turkey in the previous two years, and 60% were not hopeful that the corruption would decrease in the next two years. The most devastating finding of the detailed research is that more young respondents, compared with older respondents, think it is acceptable for a government employee to accept gifts and money. For ages 18-24, 29% said it is normal, whereas for those above 65, 11% believe such gifts are acceptable. The poll also showed that respondents with less education showed less concern about corruption than more-educated participants. Most people surveyed failed to comprehend that political corruption is stealing from their incomes. To the contrary, the general understanding goes as follows: “Yes, there are some corrupt government employees, but this the reality of Turkey. Whoever comes to power will be corrupt. At least the AKP provides services.”

Indeed, we can see the effects of corruption and a lack of accountability in three primary areas.

First is the growth of discretionary funds. From the time now-President Recep Tayyip Erdogan became prime minister in 2003 until 2016, discretionary funds have grown by a factor of 17. In the first six months of 2017, opposition newspapers reported Erdogan’s and Prime Minister Binali Yildirim’s record-breaking spending. Their unaudited spending reached 1.7 billion Turkish liras ($481 million). These funds are growing without oversight, behind a veil of secrecy. As parliament’s powers are significantly curtailed, we can only expect this sort of spending to increase.

The second area of corruption and lack of accountability is the incredible extent of cronyism seen in two areas: hiring at government agencies and bribing of government officials. Since the July 15, 2016, coup attempt, the government has been diligently purging staff from all agencies it believes might be connected. The Gulen movement has been accused of engineering high test scores on written government and military entrance exams by stealing the questions and answers for their members. There also are allegations that Alevis, Kurds and secular Turks are systematically discriminated against when they seek government jobs. One of the opposition’s main concerns is that the large number of positions left vacant by the purge are being filled by members of religious orders or by family members of the AKP elite. Competition among top AKP members to secure lucrative government positions for their family members is intense. That links to the issue of bribery. Many government employees, including lawmakers, live beyond their financial means. The common complaint is that the salaries of even the top officials are not sufficient to buy a decent house or pay for education or health care for their families. So a system that leaves behind little trace of corruption has been established. Wealthy businesspeople provide payments directly to officials in exchange for getting their business deals worked out smoothly. The most obvious cases are in the media sector.

The third area of corruption and lack of accountability is that of turning state agencies into vessels to pay off loyalists. For example, Turkish Radio and Television (TRT) has been making the news for its lavish spending on private production companies. On Aug. 8, taxes for smartphones and tablets were increased to 10% of the sale price to contribute to TRT’s budget. From 2015 to 2016, TRT's employee count dropped by 280 workers, but its annual employment costs increased 79 million Turkish liras. Despite employing more than 6,000 people, it still outsources programming, paying more than 753 million Turkish liras in 2016. One worker at a sitcom production agency told Al-Monitor, “We do not make much money really. The money is supposedly paid to our company, but then we have to pay off government people. These are mostly pro-government academics or journalists who are hired as consultants to the show.”

Perhaps the bigger the amount of money involved, the less need to hide any family connections involved. Germany's Siemens recently won the tender for a $1 billion wind-power project in Turkey with its consortium partners Turkerler and Kalyon, both Turkish companies. Energy Minister Berat Albayrak, Erdogan’s son-in-law, happily announced the deal, as the Kalyon Group is linked to Albayrak’s brother.

Another recent allegation from the opposition is that Istanbul Municipality’s "i-taxi" project (recording the voices and images of passengers) is estimated to deliver 200 million Turkish liras of annual revenue. Part of this money will allegedly be delivered to a programming company that belongs to an AKP lawmaker’s son.

If one uses an internet search engine to look up “corruption in state institutions” in Turkish, several of the top hits lead to discussions about whether such corruption is permissible in Islam. Most of the online discussions reflect that it is seen as not only an acceptable system, but also an efficient one. “Getting things done” is the justification for siphoning money from the state.

How long can such a system be sustained? As long as political corruption is not seen as illicit or harmful to individuals' livelihood, the system will endure.