Istanbul on brink of bankruptcy

Turkish President Erdogan has repeatedly said, “If we lose Istanbul, we lose Turkey,” but he indeed may have lost it electorally and in terms of financial accountability. 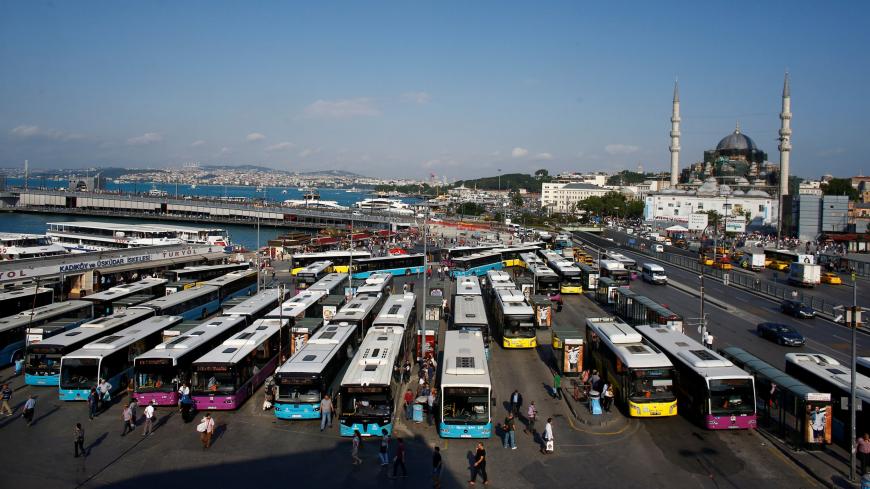 Buses are parked at the bus station in Istanbul, Turkey, June 14, 2017. An oversight report on Istanbul's many financial problems questions why the city owns a huge fleet of municipal buses but contracts out the driving. - REUTERS/Osman Orsal

When the Istanbul mayoral candidate for an election alliance led by Justice and Development Party (AKP), Binali Yildirim, said March 26, “We have to collect more taxes in Istanbul,” the statement hit a nerve with the public. Efforts were promptly made to remove the statement from the internet so as not to damage his candidacy in the March 31 municipal elections.

But Yildirim was right; the municipality is on the brink of bankruptcy. It is crucial to see the extent of the financial difficulties the city faces to understand why Turkish President Recep Tayyip Erdogan and the AKP are so reluctant to accept the results of the elections in Istanbul, where Yildirim has been trailing by a margin of some 15,000 votes.

Istanbul, a city of 15 million, has a budget for 2019 of 23.8 billion liras (over $4 billion); this is an 18.4% increase over 2018. The municipality also has two agencies that work as its partners: a directorate responsible for transportation management known as IETT and water and disposal management known as ISKI. When these are included, the total budget reaches almost 35 billion liras (more than $6 billion).

The municipality also has 28 official companies under its umbrella that handle areas such as the city parks, parking lots, city planning or natural gas distribution for consumers. The 2018 oversight report submitted to the parliament shows that the municipality (all of its companies and partners combined) is 22 billion liras (over $4 billion) in debt.

Al-Monitor spoke with Tarik Balyali, a member of the city council from the main opposition Republican People's Party who was on a committee that wrote the report, and three current and former employees of the municipality to understand why the municipality is facing financial difficulties. Balyali also wrote his own analysis of the situation.

It appears that there are four main reasons behind the municipality's financial disarray.

Balyali said that given the colossal structure of the municipality, far too few personnel are involved in oversight. Most of the problems are not new. Erdogan was elected Istanbul’s mayor in 1994. All mayors since have sprung from his political grouping, although that will change if Bildirim indeed is certified as having lost the March 31 election. Since 2002, the AKP has also been in charge of the central government.

The Istanbul municipality's financial system has gradually evolved into a very complicated apparatus. It introduced a confusing method for procurement, much like an omnibus bill, referred to an “omnibus procurement” method in Balyali’s report. The municipality also has been utilizing its 28 official companies to conduct much of its business. However, the oversight committee Balyali serves on does not have the power to inspect these companies. They can be inspected by Turkey’s Court of Accounts. Balyali said only a few companies are inspected every year.

So the first reason for the financial disarray is the lack of comprehensive oversight. Even with the limited oversight capability, opposition parties have provided several recommendations and warnings about ineffective management and reckless spending. Yet there is no working mechanism to compel change or prosecute those who act against the public interest.

The second reason is the way that the municipality has handled bidding tenders. Like with omnibus procurement, there is a rather vague language in the municipality's tenders. For example, “Greater Istanbul” or “Anatolian side of the city” are common terms used without specifics. Similarly, terms such as “repair and maintenance of service buildings” are too broad. Balyali has emphasized that the same companies win the tenders repeatedly.

There are several examples in Balyali’s report, where the municipality receives goods and services at rates much higher than market ones. Is this simple mismanagement or cronyism at work, where a significant amount of money is taken out of city coffers and shrewdly disguised in the budget?

The competition for the tenders is quite limited and the bids are rather high. In 2018, almost 12% of all city tenders were initiated with an emergency clause. This clause is to be used during a natural emergency so that the city can get immediate services. In an emergency, fair competition rules often can be ignored.

For some projects there has only been one bidder. When we look at the reasons, we see that for each tender the municipality provides specific conditions that are almost custom-designed for that winner. No other company can meet these specific special conditions to enter the competition. These conditions are legal. They lead repeatedly to the same conclusion: There has been an elimination of competition.

The third reason is simply bad management that harms the public interest. For instance, the municipality’s transportation partner IETT has agreed to rent out hundreds of its buses to another transportation firm. These are not extra vehicles but those that are to serve the city. The transportation company is to provide the drivers and the gas. Interestingly, if there is an accident that requires repairs less than 100,000 liras ($19,000), then IETT is responsible for that cost. All the revenues collected from serving the city are left to the transportation company. Balyali has asked why the city is renting out its vehicles rather than doing the driving itself.

Also, in 2018, due to a cash crunch because of its high debt to income ratio, the municipality started selling public land. Land is quite valuable in Istanbul, and the report questions why properties were sold below market value.

The last reason is reckless spending. A good example of this is almost 848 million liras ($155 million) donated to private schools and student hostels and dormitories by the municipality in 2018 and before. These donations are awarded mostly to religious endowments and this is legal as well. The problem is most of the recipients have close links to Erdogan’s family. The largest recipient is the Turkish Youth Foundation (TUGVA) with 74.3 million liras ($14 million). Bilal Erdogan, Erdogan’s younger son, serves on TUGVA’s high advisory board.

The municipality has escaped financial surveillance as the rules and regulations of city management have changed frequently in Turkey. Yet this does not eliminate the exponentially growing debt. Bad management, no matter the ever-changing laws, should be scrutinized.

Before the election, Erdogan made it clear that even if the opposition won any municipalities, they would not be able to govern. “They won’t even be able to pay the salaries of their employees,” Erdogan said. As Turkey has transitioned into an all-powerful presidential system, the local governments have less control over their own finances and resources. If they would like to borrow from government banks they would need Erdogan’s approval.

In a nutshell, Erdogan has sufficient legal power to turn mayors into symbolic posts, so why would he be so reluctant to congratulate opposition party candidates’ victories in Istanbul and other cities? It seems that even if Erdogan can limit mayors’ executive powers, it would still be difficult to manage local governments from Ankara. That is why Erdogan has repeatedly said, “If we lose Istanbul, we lose Turkey."