A whistleblower has made claims that, in addition to hundreds of job hirings made at TUGVA's request, the organization was also allocated over 1,000 government-owned buildings to use as dormitories for its members. 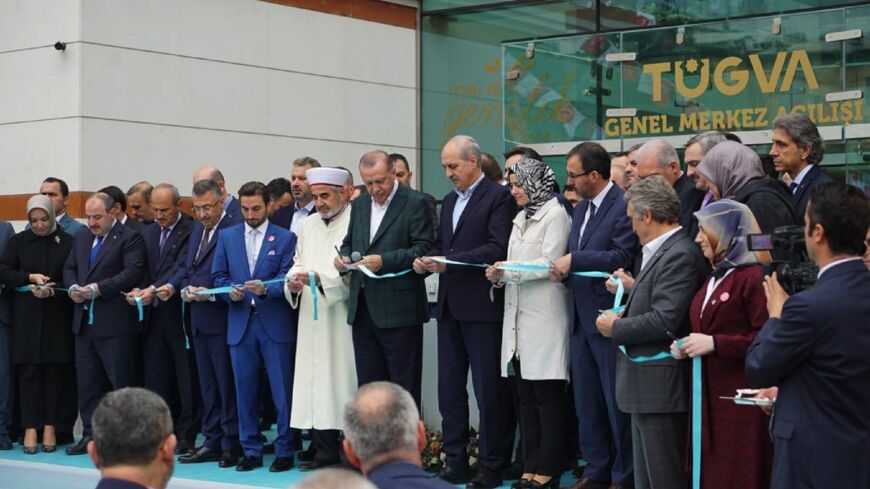 A youth foundation linked to the younger son of Turkish President Recep Tayyip Erdogan found itself mired in fresh controversy after a former employee leaked incriminating documents exposing how it served as a vehicle for installing party loyalists in the bureaucracy.

Metin Cihan, a respected independent journalist, published lists provided to him by the former employee of the Turkish Youth Foundation, or TUGVA, on his Twitter feed containing names of hundreds of people who were allegedly either given or considered for jobs at state institutions, including the military, the judiciary and the police, at TUGVA’s behest.

TUGVA, along with several other pious youth organizations with links to Erdogan and his ruling Justice and Development Party (AKP), were allocated over 1,000 government-owned buildings as dormitories for their own members at a time when Turkish students are facing acute accommodation shortages across the country, according to the unidentified whistleblower.

Cihan posted a screenshot of his communications with the whistleblower but blotted out the sender’s name. Several Erdogan-linked foundations alongside TUGVA allegedly benefited from generous government subsidies, including from state-owned banks. In October 2016, TUGVA was granted tax exempt status.

The whistleblower additionally claimed that a woman had been sexually abused within TUGVA.

TUGVA has dismissed all the claims as a plot. “The target of the operation is today the same as it was yesterday — youths, people, foundations, operations who work for their country their people, their flag and their religion. The operation has a single aim, to hinder the progress of TUGVA and our other foundations but they will fail and the they will be vanquished by youths,” TUGVA said in a statement.

Unsurprisingly, the pro-government media has launched a smear campaign against Cihan. These include boilerplate claims that he was operating on behalf of the "Fethullah Gulen Terror Organization" — Ankara's name for the movement led by US-based preacher Fethullah Gulen — and that his sister was a member of the outlawed Kurdistan Workers Party. Takvim, a government mouthpiece, said Cihan’s real name was Cihan Yucel and that he had fled Turkey in 2018 ostensibly to avoid prosecution over separate charges of resisting police and inciting hatred — claims that are commonly flung at critical reporters.

Cihan tweeted that the whistleblower told him he had decided to share all the documents in his possession.

The revelations have prompted parallels between TUGVA and the shadowy network run by Gulen, the Pennsylvania-based Sunni preacher who is accused of orchestrating the failed attempt to overthrow Erdogan in 2016 by military force. The pair were closely allied in the early days of AKP rule. Erdogan allowed thousands of Gulenists — who had already been quietly infiltrating the ranks of the military and police even before the AKP won power in 2002 — into other branches of government.

A massive purge of alleged Gulenists ensued in the wake of the failed putsch.

The government is apparently seeking to replace them with its own loyalists who are indoctrinated by TUGVA and the like. “If the allegations are true, we are facing a new parallel state,” Erkan Bas, chairman of the small left-wing opposition group the Turkish Workers Party, told parliament in today’s session. He called for a commission to be formed in order to investigate the claims.

The popularity of the AKP and its leader is wearing thin mainly due to unfavorable economic conditions including rising inflation, a steadily weakening Turkish lira and high youth unemployment. Opinion polls consistently suggest they will be defeated in presidential and parliamentary elections that are due to be held in 2023. As such, the main worry of Erdogan and his supporters is not that the secularists will reinstate bans on the Islamic headscarf and other expressions of Islamic piety, “but that they will no longer be controlling the spigot and filling their own buckets” should they be removed from power, former Islamist and prominent government critic Levent Gultekin told Al-Monitor. “It’s not just the Islamists; left-wingers, nationalists, Kurds — everyone is out to ensure their own survival," Gultekin added. "It's a tribal culture; democratic values have failed to take root.”

TUGVA made headlines last week when it butted heads with the opposition-run Istanbul municipality after TUGVA refused to vacate a lucrative municipality-owned property on the largest of the Princes' Islands despite a court ruling saying that it should. The row escalated when the government deployed riot police to protect TUGVA against municipal officials.

Commenting on the dispute, Istanbul Mayor Ekrem Imamoglu said, “We will not enrich foundations attached to one person or the other or their families. We will strengthen our institutions.”

“In our city there are 1.2 million students, and there were zero [municipality-run] student dormitories [when we took charge]. You know why? Because those foundations and associations were being prioritized. The gravy train has stopped with this Istanbul metropolitan municipality,” he said.

TUGVA’s mission statement asserts that it wants to raise youths with open minds, fresh ideas and moral values. Since its inception in 2013, it has established branches in all 81 provinces of Turkey, including in predominantly Alevi Tunceli in the majority Kurdish southeast.

The effort to recruit sympathizers has been carried overseas much as it was by the Gulenists. The Turken Foundation is a leading example, with branches in New York and London. Among its goals is to “provide safe, supportive and culturally appropriate housing for Muslim students.” Its board includes Erdogan’s eldest daughter, Esra Albayrak. In 2018, boxing legend Muhammed Ali’s widow, Lonnie, sold the couple’s 81-acre Michigan estate for $2.5 million to Turken.