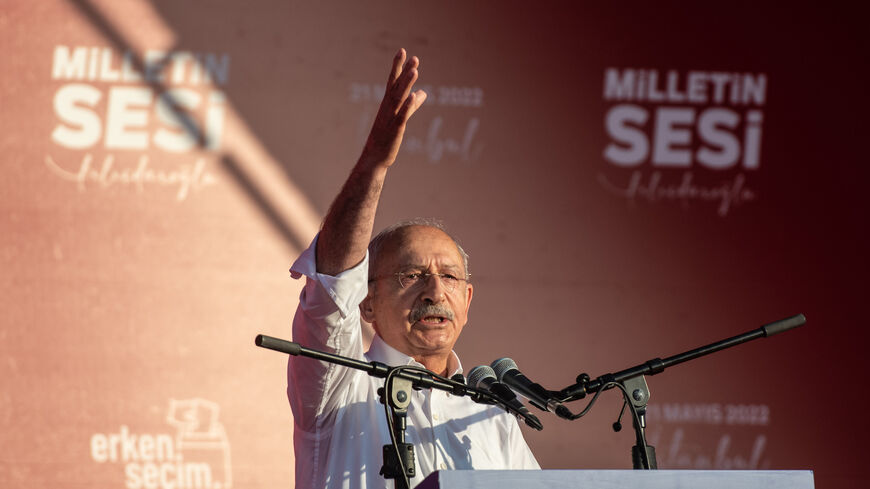 ISTANBUL — Turkish opposition leader Kemal Kilicdaroglu has explosively claimed that millions of dollars have been siphoned off to allow President Recep Tayyip Erdogan to flee the country if he loses the upcoming election.

In a video posted on Twitter Tuesday night, Kilicdaroglu, who heads the Republican People’s Party (CHP), said the equivalent of $61 million was being transferred “all of a sudden” to the United States through education foundations close to the president.

Emre Yilmaz, a senior CHP member, later posted what purported to be documents from the US Department of Justice’s Foreign Agent Registration Act unit that showed individual transfers of up to $10.8 million between September 2014 and July 2020.

The two Turkish foundations making the transfers, Turgev and Ensar, are known to be close to the president’s circle. Erdogan’s eldest daughter, Esra Albayrak, sits on the board of Turgev.

“They want to flee from the country they have destroyed with lawlessness to the United States to take refuge in the law,” Kilicdaroglu said. “They are setting up a front foundation. They put an American citizen at its head, but the real management of the foundation belongs to members of the Erdogan family.”

Earlier on Tuesday, at his party’s parliamentary group meeting, Kilicdaroglu aimed his words at government officials “involved in crime.”

He said, “They are not including you in their plans to save themselves at all. A collective escape plan is in place. They stepped up preparations to escape. Erdogan is transferring huge sums of money abroad with parallel structures that he pretends to be a foundation.”

Kilicdaroglu has previously accused the government and its supporters of corruption and vowed to hold them accountable if the CHP comes to power in elections due to be held by June 2023.

The “front foundation” Kilicdaroglu claimed was set up to facilitate the “escape plan” is the New York-based Turken Foundation, established in 2014 by Turgev and Ensar. Turken lists its activities as assisting “eligible students by means of housing, scholarship and other cultural programs to improve their educational experience in the United States.”

Erdogan’s daughter, who is married to former Finance Minister Berat Albayrak, is also listed as a Turken director.

According to its website, the foundation has helped more than 500 students since 2014 and currently provides housing services for more than 50 Muslim students, scholars and researchers.

These achievements, however, are dwarfed by its latest student housing project: a 21-story, 80,000-square-foot building in midtown Manhattan due to open next year. Real estate website New York YIMBY reports rooms would cost around $1,300 to $3,000 per month.

The Manhattan “flagship” is not Turken’s first property deal to attract headlines. In 2018, the foundation purchased Muhammad Ali’s Michigan farm for a reported $2.5 million.

Nor is it the first time questions have been raised over payments to Turken. When Baskent Gaz, the company that supplies Ankara with natural gas, donated $8 million to Turken, it did so through the Red Crescent charity, reportedly saving itself $1.5 million in taxes. The vice chairman of Baskent Gaz is a childhood friend of Erdogan.

Washington-based journalist and author Yilmaz Polat, who has written extensively on Turken, said the foundation was established in Delaware, a state known for its relaxed tax and corporate regulations.

“Their annual income is astronomical but their donors are never disclosed,” he told broadcaster TELE1.

Turken filed its financial dealings with the Justice Department on May 18, three days after the AKP set up its first office in Washington.

“We don’t know why [the party] needed to open an office, [but] at the head of this office is Halil Mutlu, who is Erdogan’s cousin,” Polat said. “Halil Mutlu was previously one of the directors of Turken. Three days after the AKP office opened, I was very intrigued by the fact that the Ensar and Turgev ​​foundations separately notified the US Department of Justice.”

In a joint statement, Ensar and Turgev described Kilicdaroglu’s claims as “irrational and inconsistent” and having “no legal or moral basis.” Referring to the group Ankara accuses of organizing a 2016 attempted coup, the foundations went on to describe the allegations as resembling “a FETO conspiracy from start to finish.”

Erdogan’s lawyer Huseyin Aydin said legal action would be taken against the CHP leader for his “baseless accusations and slanders.”