After major gains in local elections last month, including a landmark victory in Istanbul, Turkey’s main opposition vows to turn off the funding spigots for Islamic entities, which have long underpinned the ruling party’s electoral machine. 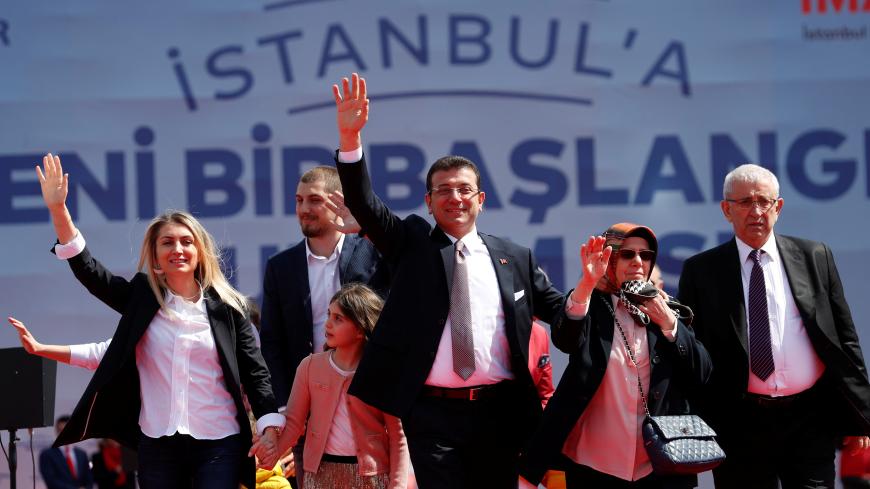 Mayor of Istanbul Ekrem Imamoglu of the main opposition Republican People's Party (CHP), accompanied by his family members, greets his supporters during a rally in Istanbul, Turkey, April 21, 2019. - REUTERS/Murad Sezer

The main opposition’s election victory in Istanbul — Turkey’s biggest city and economic hub — has set the stage for major changes in how the city’s budget is spent. Since his razor-thin victory in the March 31 polls, the new mayor — Ekrem Imamoglu of the Republican People’s Party (CHP), whose victory is still being challenged by the election board — has vowed that the era of “serving [certain] individuals, associations, foundations and communities is over.”

Imamoglu’s remarks seemed to single out not only the business cronies of the ruling Justice and Development Party (AKP), but also groups espousing political Islam. Such groups have significantly expanded their financial and social clout under the AKP.

Al-Monitor asked CHP leader Kemal Kilicdaroglu what groups the new mayor meant. Was he announcing an end to funding for entities such as the Ensar Foundation and the Turkey Youth and Education Service Foundation, which espouse political Islam and are closely linked to the AKP government? Kilicdaroglu answered in the affirmative. “We are against such transfers of municipal funds,” he said. “Municipal funds belong to the local people and should be used in line with their needs. The local people must know where the money goes.”

Kilicdaroglu was confident that the termination of such funding would be easy to implement. “Once the mayor makes the decision, it will be very easy,” he said.

The associations and foundations in question have been pillars of the AKP’s almost 17-year rule. Their role extends back to the 1980s and the 1990s, when they were the most trustworthy vessels of Islamic parties to advance their political struggle. Numbering in the hundreds, they were part of the strong civic society network the Islamic movement had built during its many decades in opposition. Coming into their heyday under the AKP, they have reinforced the party’s voter base through the assistance they provide to the needy, in addition to spearheading President Recep Tayyip Erdogan’s “pious generation” goal through the scholarships and dormitories they provide to students.

Ahmet Faruk Unsal, a former AKP lawmaker who has fallen out with the party, believes that the government’s collaboration with those associations and foundations is akin to building “a parallel state structure.” In remarks to Al-Monitor, Unsal pointed to the myriad dorms and kindergartens that those entities have opened. “The Credit and Dormitories Directorate is tasked with providing loans and dorms to students. Yet they open dormitories and provide scholarships to students via those foundations and associations,” he said.

“Thus, by pouring money there rather than to official institutions, they are building a separate structure outside the state, while also removing the funds from the supervision of the Court of Accounts,” he added, referring to the country’s top public auditor.

Given the major role that Islamic associations and foundations have played in promoting religious and conservative worldviews in society, coupled with the 25-year local dominion of political Islam in Istanbul, Imamoglu’s pledge to end financial support to those groups signifies more than just an alternative approach to administrative and financial affairs. The exact number and budgets of those entities are hard to know, but the municipal funds they have enjoyed are believed to be significant. Is their funding in jeopardy now? The answer to this question is crucial.

According to Tarik Balyali, a CHP member in both the new and previous municipal assembly in Istanbul, the outgoing AKP-led administration spent at least 340 million Turkish liras ($57.2 million) to support associations and foundations over the past year and a half. “That money was not cash transferred to the accounts of those foundations and associations," he said. "Rather, the municipality paid their rents or assumed the maintenance and repair of their buildings under protocols signed in 2017 and 2018. Such expenses amounted to 340 million Turkish liras over a year and a half."

Such payments “are legal but not ethical,” Balyali argued. “What we have here goes beyond the rights that the law grants to municipalities and foundations, [amounting to] committing the offense of abuse of power. We went to court on those grounds, but the court rejected the lawsuit, saying that the law on municipalities allowed for such payments. In our view, foundation work is a matter of volunteerism, and foundations should meet their expenses by themselves.”

Asked how Imamoglu’s pledges have resonated with the public, Balyali said, “The reactions have been very positive. Istanbul is a city that needs serious investment, and Istanbulites have some priorities. We will use the budget for those priorities. In our view, what the people of Istanbul expect is service and not [the financing of] those foundations and associations.”

What makes the municipality’s benevolence controversial in the public eye is that almost all beneficiaries belong to the fold of Sunni Islam and support the AKP. According to the municipality’s 2018 report on activities concerning civic groups, schools and dormitories, the leading recipients of assistance include four foundations in which Erdogan’s son Bilal, daughter Esra and son-in-law Selcuk Bayraktar hold senior positions, along with other AKP-controlled or Islamic entities.

Asked whether the planned cut of assistance to those groups would bear on the social and cultural climate in Istanbul, Balyali said, “It will certainly have an effect on social life. And it will not be a negative effect.”

Kilicdaroglu, for his part, said he had instructed CHP mayors across the country to follow suit. Apart from its victory in Istanbul, the CHP won the mayoral races in the capital Ankara, the country’s third biggest city Izmir and an array of other major urban centers, such as Adana, Antalya and Mersin. The impact of reassigning municipal funds, so it seems, would be hard to play down.