Erdogan’s election machine is rusty and worn out

The campaign that Erdogan and his Justice and Development Party (AKP) are waging for the rerun of the Istanbul mayoral race is far from promising a victory, showing how the AKP — once a formidable election machine — has aged into an exhausted body with waning skills. 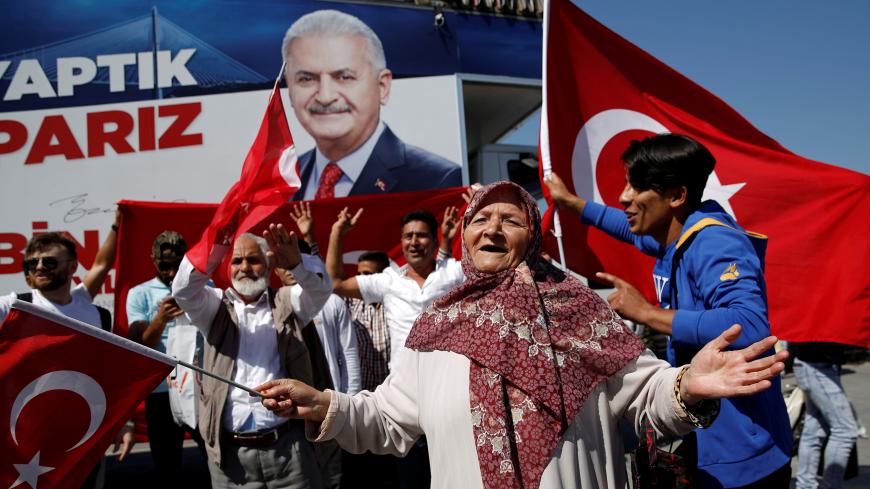 On the evening of June 16, Turkey will remember a ritual of democracy that the Justice and Development Party (AKP) has made the country forget over its 17 years in power — a televised debate between political rivals Binali Yildirim of the AKP and Ekrem Imamoglu of the main opposition Republican People’s Party (CHP), the two main contenders in the June 23 rerun of the mayoral election in Istanbul.

The AKP’s political culture has barred party candidates from facing their rivals directly and on equal terms in pre-election televised debates. In five parliamentary polls, two presidential polls, four local elections and three referendums held under AKP rule, the party’s leader, Recep Tayyip Erdogan, has never held a televised debate with any rival ahead of the votes. In democratically governed countries, televised debates help voters to compare candidates and form healthier opinions. Erdogan and his party, however, have mostly pursued polarizing rhetoric targeting the legitimacy of their opponents and thus stood aloof from facing them in such debates over the past 17 years.

So, what has changed now ahead of the Istanbul election rerun to lead Yildirim — a former premier, transport minister and parliament speaker who was pressured to run for Istanbul mayor by Erdogan — to agree, no doubt with Erdogan’s consent, to a televised face-off with his young rival, Imamoglu? He had been averse to such a debate ahead of the original vote on March 31, in which Imamoglu won a razor-thin victory but saw it canceled by the Higher Election Board on the grounds that the heads of some balloting committees were not public servants as the law requires.

In the absence of any convincing signs that Erdogan’s and Yildirim’s political culture has changed in favor of pluralism since March 31, the only visible major change is in the opinion polls, which suggest that Imamoglu is likely to widen the margin of 13,000 votes he had against Yildirim in the original vote. This, in fact, is the factor that forced Yildirim to finally agree to face his opponent on TV. Trailing behind Imamoglu in surveys conducted between mid-May and the first week of June, he hopes to pull off a televised performance that will close the gap.

Election arithmetics suggest that the winner of the mayoral race will be the party that manages to bring out the voters who shunned the polls on March 31. The turnout in Istanbul in that vote was 83.9%, falling from 88.4% in last year’s parliamentary and presidential polls. Pundits calculate that the number of poll-shunners in the city increased by 600,000 from last year. Among them are AKP voters unhappy with their party and Turkey’s general course, Kurds who grew disinterested after their Peoples’ Democratic Party (HDP) decided to sit out the race, and CHP supporters resentful over their party’s performance in last year’s presidential polls.

Given the close race, the issues that could sway those 600,000 voters on June 23 — and all voters, as a matter of fact — are of critical importance.

According to a survey by Istanbul Economy Research, the economic crisis gripping Turkey and the growing problem of joblessness, in particular, is expected to bear heavily on how voters decide. According to the survey, which was conducted among 1,500 people in Istanbul’s 39 districts on May 24-26, four out of 10 Yildirim supporters say that either a family member or someone from a close family has lost a job in the past three months.

The second issue is the election board’s cancellation of the March 31 result. Two out of 10 people who voted for Yildirim say they disapprove of the decision. Also, one out every four Yildirim voters say they followed and liked Imamoglu’s activities during his 18-day stint as mayor.

Since Yildirim’s defeat in the March 31 vote, the People’s Alliance — comprised of the AKP and the far-right Nationalist Movement Party (MHP) — has reviewed its electioneering positions. Erdogan had said he would hold rallies in each of Istanbul’s 39 districts ahead of the election rerun, but let alone rallies, he has begun to adopt an extremely low profile, which is highly uncharacteristic of him. MHP leader Devlet Bahceli, who had pledged to “encamp” in Istanbul in early May, is hardly seen around and had not even tweeted since May 31 as of June 11.

Also, the alliance has dropped its narrative that the local elections were “a matter of survival” for Turkey, which proved highly ineffective in the March 31 vote. Instead, it has turned to a slogan focusing on services — “We did what we promised and we’ll do it again.” The election pledges Yildirim announced in late May are also project- and service-oriented. For instance, he promises to create jobs for 100,000 Istanbulites every year, 10 gigabytes of free internet monthly for university students and free public transport for teachers.

Despite all those pledges, Yildirim is struggling to overcome the unfavorable position in which he finds himself ahead of the June 23 vote. And this is not only because of the economic crisis and Imamoglu’s successful outreach to various segments of society. Yildirim takes harm also from serious disarray and lack of coordination in AKP and government ranks.

Take, for instance, the claim that Imamoglu is a crypto-Greek, based on the fact that he hails from Trabzon, a port city in the eastern Black Sea region, which was the capital of a Pontic Greek state until its Ottoman conquest in the 15th century. The AKP mayor of an Istanbul district made the claim May 15, and the controversy it stirred has dragged on since then. AKP quarters may have thought that “the Pontus campaign” would spawn a nationalist aversion against the CHP candidate, but it has simply backfired, boosting Imamoglu’s appeal among people with roots in the Black Sea region and fueling their indignation against the AKP. Last week, Imamoglu traveled to his hometown on the occasion of the Eid al-Fitr holiday and held one of the biggest rallies that Trabzon has ever seen.

The AKP’s election campaign has become the scene of glaring incoherency between Yildirim, who is trying to project moderation, and hard-line Interior Minister Suleyman Soylu, who does exactly the opposite, sticking to polarizing and offensive rhetoric. Soylu made his own contribution to the “Pontus campaign,” slamming a man who protested him in Trabzon June 9 as being linked to circles that allegedly seek to revive the ancient Pontus.

Istanbul’s electorate includes 2.5 million people hailing from the Black Sea region, and if the Pontus controversy is to have any impact on how they vote on June 23, it is not likely to be in the AKP’s favor.

In the March 31 campaign, AKP and MHP spokesmen had propagated that the CHP-led Nation’s Alliance was “hand-in-hand with terrorists” over the support it received from the HDP in western Turkey. This caused Kurdish resentment against the AKP and a loss of votes. Yildirim is now trying to win over the Kurds. On June 6, he visited Diyarbakir, the biggest city of the Kurdish-majority southeast, and in a speech there he made a point to mention that Turkey’s parliament had a “Kurdistan deputy” when it was first formed in 1920.

The remark caused resentment and suspicion in MHP ranks, leading many to suggest that Yildirim’s charm offensive to woo the Kurds might end up alienating the nationalists for whom “Kurdistan” is a taboo word associated with Kurdish separatism. During the March 31 campaign, many recalled, Erdogan had asserted that “there is no place called Kurdistan in Turkey.” And while Yildirim was visiting Diyarbakir, an AKP lawmaker claimed that if the CHP won Istanbul, it would give the lucrative business of running car parks to the HDP, contradicting Yildirim’s “moderate” image.

In sum, the AKP, which used to operate as a highly efficient, disciplined and vigorous election machine in its early years in power, appears in a state of confusion on the eve of the mayoral race in Istanbul, lacking coherent rhetoric, spirits, discipline and motivation after 17 years in power.