Ekrem Imamoglu, who won the election as Istanbul mayor in March before he was forced to step down, has expanded his support ahead of the doover election on June 23. 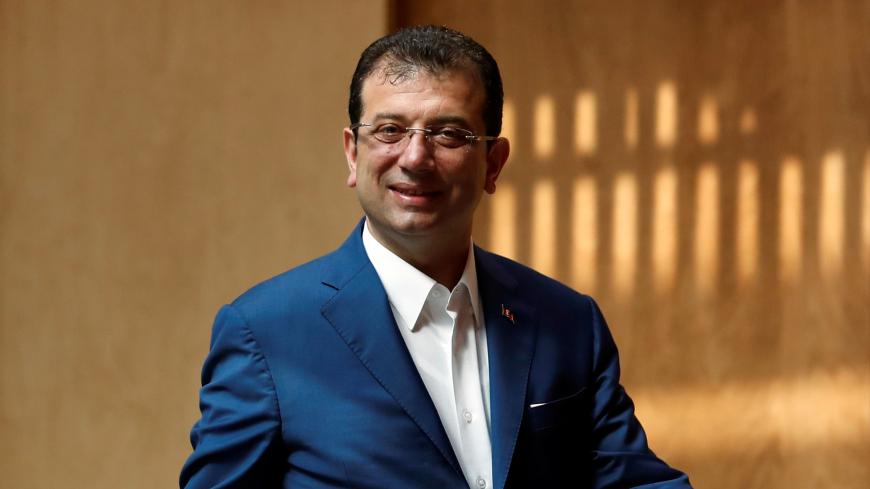 Ekrem Imamoglu, briefly Istanbul's mayor from the main opposition Republican People's Party, is pictured during an interview with Reuters in Istanbul, Turkey, May 9, 2019. - REUTERS/Murad Sezer

ISTANBUL — Opinion polls show opposition candidate Ekrem Imamoglu pulling ahead of his rival from Turkey's ruling party in his bid to recapture the post of Istanbul mayor. He briefly held the position before electoral officials revoked his mandate and forced a new election next month.

Citing technical irregularities earlier this month, the Supreme Electoral Council (YSK) canceled the results of Istanbul’s March 31 mayoral election in which Imamoglu of the Republican People’s Party (CHP) squeaked out a victory with a winning margin of just 13,729 votes out of the 8.5 million ballots cast. The ruling Justice and Development Party (AKP), which has controlled the Istanbul municipality for a quarter century, promptly objected to the result.

Now, a handful of voter polls show Imamoglu of the opposition has broadened his support ahead of the June 23 rerun election, according to news reports.

Imamoglu is two points ahead of former AKP Prime Minister Binali Yildirim at 47%, according to pollster MAK Consulting. Imamoglu’s share is 50.3% when undecided voters are distributed in the poll of 11,000 people conducted between May 15 and 20.

In another poll, Imamoglu led by four points at 52% of the vote, Hilmi Dasdemir, head of polling firm Optimar, told HaberTurk television. But Dasdemir said his research was conducted before the YSK released its justification for the election’s annulment last week and that Imamoglu’s lead is likely to contract to two percentage points in another survey Optimar is currently conducting. Dasdemir did not provide further details.

Pre-election surveys in Turkey are notoriously problematic because researchers do not always publish information on methodology or data collection, nor is funding for the research transparent, experts have said. Another feature of surveys is that they are less a predictor of a coming election than they are a snapshot of voters’ inclination on the day they were polled.

Still, the latest results indicate the challenges Yildirim faces as he seeks to reverse the March election outcome. The MAK poll found that 79% of respondents said they would not change their vote from the choice they made on March 31. Of the 13% who said they may support a different candidate, 65% had voted for Yildirim last time, it said.

MAK also reported that 49% of respondents do not believe the AKP’s allegations that irregularities occurred in March, while 43% said they thought that vote was tainted.

The YSK indicated the appointment of a small number of polling stations officials who were not civil servants as its main justification for its extraordinary decision to erase Imamoglu’s win. It did not cite the AKP’s far more serious allegations of vote theft.

But Yildirim reiterated his claim that he had been robbed. “Unfortunately, the votes you cast were appropriated, they were stolen,” Yildirim said late on Monday. “The ballots you cast for me were attributed to someone else.”

Yet the perception that Imamoglu was wronged persists, Adil Gur, who owns the A&G opinion research firm, told HaberTurk. “Imamoglu has an easier task. … Among voters who say they will definitely vote, we see that those who say they will vote for Imamoglu are more motivated.”

Adding to the worries that Imamoglu’s campaign is competing on an unlevel playing field, on Monday, a court accepted an indictment against his chief strategist, Canan Kaftancioglu. The prosecutor’s office wants to jail her for up to 17 years, accusing her of insulting President Recep Tayyip Erdogan, spreading “terrorist propaganda” and provoking enmity among the public in social media posts dating as far back as 2012.

Voter turnout is expected to decline in the rerun election with as many as 2.5 million voters leaving the city to begin their summer holidays in June, though a large majority said they will return in time to vote, reported Gur. The largest single group that did not vote on March 31, accounting for 18%, are supporters of the leftist and pro-Kurdish People’s Democratic Party (HDP), Gur said.

The HDP did not field a candidate in Western cities in March to tacitly back the opposition. Irfan Aktan, a columnist with Gazete Duvar who covers the Kurdish political movement, estimated 900,000 Kurds voted for Imamoglu.

The HDP has signaled it will maintain its implicit support for Imamoglu again on June 23, despite recent overtures by the government to curry Kurdish support, Aktan told Al-Monitor. “But mobilizing Kurdish voters who did not go to the ballot box on March 31 is critical for the CHP this time,” he added.

While Imamoglu has expressed gratitude to Kurds for their votes, the AKP’s campaign rhetoric linking the HDP to armed Kurdish militants makes it problematic for the party to openly endorse the CHP candidate, who risks alienating nationalist Turks.

On Monday, Aktan published an interview with Selahattin Demirtas, the HDP’s former chairman who has been in prison since November 2016 on terrorism-related charges stemming from his political speeches. The interview was a collective effort, with more than 30 journalists each posing a question that ranged from Demirtas’ jailhouse literary endeavors to his expectations about the Istanbul election.

Demirtas said he was aligned with his party and that it has made its position on the June 23 vote clear. He urged Imamoglu to continue his efforts to bridge the divide among Turkey’s deeply polarized electorate to ensure “the support the people have shown him endures.”

Despite his long incarceration, Demirtas remains hugely influential over HDP voters. Before the March vote, he urged supporters on Twitter to vote “strategically” in a call to back Imamoglu. “You never know — maybe Demirtas will retweet that right before June 23,” said Aktan.