Ekrem Imamoglu launched his second election campaign for Istanbul mayor, pledging to cut the wastefulness he discovered during his brief tenure as mayor last month, before electoral officials canceled his victory. 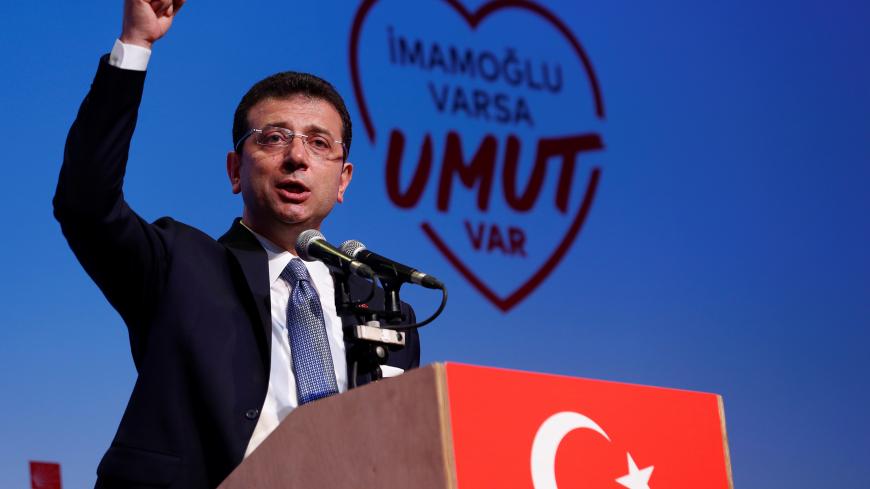 ISTANBUL — Ekrem Imamoglu, whose tenure as Istanbul mayor was cut short after an extraordinary decision to nullify his electoral victory, kicked off his rerun campaign this week, vowing to retake control of the municipality and end the profligacy he said he unearthed during his 18-day stint in office.

But in a sign of the pressure Imamoglu’s campaign faces, a prosecutor has prepared a criminal indictment against his chief strategist for allegedly inciting enmity and spreading “terrorist” propaganda on social media, according to the opposition Republican People’s Party (CHP).

Imamoglu told a room packed with hundreds of supporters on Wednesday that he would fight anew in the June 23 election to restore faith in the ballot box, despite the “great injustice” of having his mandate revoked when electoral officials ordered that votes be recast after the ruling Justice and Development Party (AKP) petitioned for the election's cancellation.

Imamoglu’s upset win on March 31 shocked Erdogan’s AKP, which controlled the Istanbul municipality for a quarter century. The victory came amid widespread voter discontent with the economy, which has sunk into recession after a currency crisis last year unleashed inflation that hovers at 20%.

The AKP suffered a string of losses in cities across Turkey, including the capital Ankara, but it refused to concede defeat in Istanbul, which accounts for nearly 40% of Turkey’s $850 billion economy and is the source of lucrative contracts for companies close to the administration.

Imamoglu blamed a small coterie that has benefited from the “squandering” of municipal resources as the real force behind the election’s cancellation, while a quarter of Istanbul residents suffered below the poverty line.

The city’s debt ballooned more than fourfold to 27.5 billion liras ($4.5 billion) between 2014 and 2019, and its budget deficit increased to 4 billion liras from 216 million liras in the same period, Imamoglu said. Among the sources of waste, according to Imamoglu, were a fleet of thousands of cars, tens of millions of liras spent on the municipal website and a payment of 226 million liras for consultants.

The campaign event coincided with the Supreme Electoral Council's (YSK) release of a 250-page report detailing its justification for ordering a repeat of the March election. It found that polling station chiefs for 754 ballot boxes — out of more than 31,000 in the city of 16 million inhabitants — were not civil servants, as the law required. Since Imamoglu’s margin of victory was just 13,729 votes, this irregularity may have affected the result, the board said.

Four of the 11 board members voted against the cancellation, including YSK President Sadi Guven, who said that once his board approves a polling station committee, objections to it after an election are not grounds on their own to cancel the result.

The YSK decision shows the YSK’s lack of independence, said Howard Eissenstat, a professor at St. Lawrence University and nonresident fellow at the Project on Middle East Democracy.

“If you look at the hundreds of pages of the ruling, there is nothing there," he told Al-Monitor. "If you look at the very short dissenting opinion, that is evidence based. We’ve seen a series of reforms of key institutions, the YSK being the most significant, which has restaffed them, limited their power and made them increasingly extensions of the AKP.”

The YSK decision made no mention of the AKP’s claims of voter fraud and theft. Binali Yilidirim, who lost the March 31 vote, had accused the opposition of “stealing” the election. After the YSK report, Yildirim said he used the term “vote theft” to help the public better understand the unusual events that tarnished the Istanbul mayoral campaign.

Meanwhile, Canan Kaftancioglu, the head of the CHP's Istanbul branch and the architect behind Imamoglu’s campaign in March, has been indicted on charges of insulting public officials and the Turkish Republic, inciting enmity among the public and for spreading “terrorist” propaganda on social media.

She faces between three and 11 years in prison if convicted. A CHP spokeswoman said the charges stem from comments she made online between 2012 and 2017 about the Armenian genocide and the death of a boy who was killed by a police tear gas canister during the 2013 Gezi Park protests.

"What we’re seeing with the [indictment of] Kaftancioglu … is the AKP continuing efforts to undermine the opposition’s capacity to effectively contest and monitor the election,” Eissenstat said. “I find it hard to imagine the AKP, after taking the draconian step of overturning the March 31 election, would be willing to accept a loss on June 23. That would be a devastating loss of face and a demonstration of weakness for Erdogan.”

For its part, the AKP’s campaign will mobilize tens of thousands of volunteers to visit the homes of the 1.7 million people who did not vote and convince them to vote for Yildirim this time, newspapers said. These voter rolls have reportedly not been shared with the opposition.

A large number of the voters are believed to be disgruntled conservative Kurds, perhaps angry with Erdogan’s clampdown on Kurdish media, civil society and politicians since 2015. The AKP is appealing to community leaders in the largely Kurdish southeast to make the party’s case to their followers in Istanbul.

Yildirim, a former prime minister, has pledged to ease voters’ economic pain. He said he scrapped penalties for drivers who skipped tolls on an Istanbul bridge, even though he currently holds no official position other than his seat in parliament.

He has also claimed credit for discounting water utility charges and reducing public transportation fees for students — two measures introduced by Imamoglu while mayor. And his campaign hashtag #DahaGuzelOlacak (“It Will Be Even Better”) borrows from Imamoglu’s #HerseyGuzelOlacak (“Everything Will Be Fine”).

One AKP supporter, who declined to give her name, said she did not vote for any mayoral candidate in March to protest the government’s handling of the economy. “I didn’t think the CHP would win, so now I feel like it’s my duty to vote for the AKP this time. But I have no enthusiasm,” she said.

Yuksel, another longtime AKP voter who asked that his last name not be used, said he had never heard of Imamoglu before the March election, when he cast his ballot for Yildirim. Now he believes the election result was canceled for “political reasons. Imamoglu is the victim here. Turks won’t stand for this kind of injustice,” he said, adding that he’ll vote for the CHP for the first time.

Such “anecdotal reports of traditional AKP voters becoming increasingly reluctant to support what they see as the politically motivated decision to order a rerun [indicates] little prospect of the AKP winning a free and fair election. But nor does there appear to be much prospect of one taking place,” wrote Wolfango Piccoli, co-president of the UK-based consultancy Teneo, in a research note.