The announcement that the Istanbul mayoral election was going to be held again was greeted with the discordant sounds of clanging pots and pans, and supporters of opposition candidate Ekrem Imamoglu now face the difficult task of finding the recipe that can bring him victory again June 23. 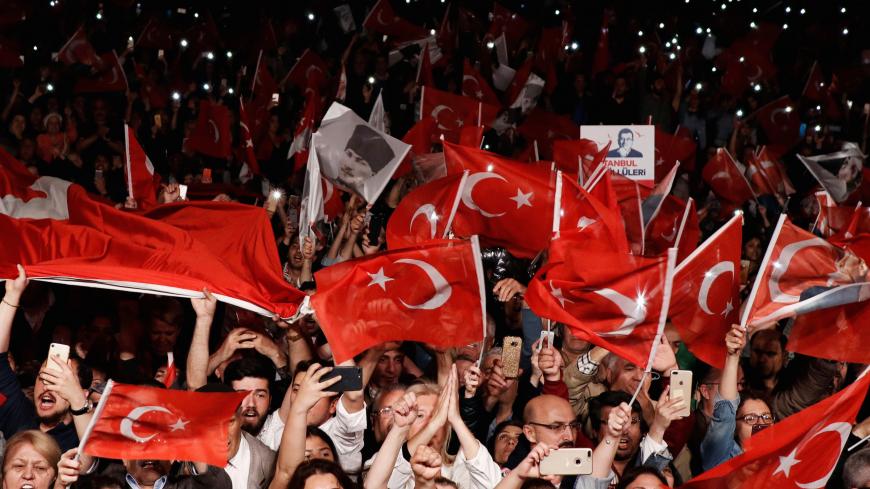 Supporters of the main opposition Republican People's Party (CHP) wave Turkish flags during a gathering to protest after the Supreme Electoral Board decided to re-run the mayoral election, in Istanbul, Turkey, May 6, 2019. - REUTERS/Murad Sezer

ANKARA, Turkey — The night the Supreme Electoral Council announced it had voided the election for Istanbul’s mayor, a legion of residents in the city banged pots and pans.

It was a throwback to the Gezi Park protests of 2013, when thousands of housewives who could not take to the streets took to their windows to vent their feelings about then-Prime Minister Recep Tayyip Erdogan. A video taken from a high building Monday night recorded a cacophony of cookware from Istanbul’s streets.

The next day, people realized that the day the electoral council had chosen for the re-run election, June 23, would fall one week into the summer holidays. Thousands of middle-class residents, most probably opposition voters, would be far away from Istanbul’s polling stations.

The Aegean island of Bozcaada posted a warning on social media that Istanbulites should not swim in its turquoise waters June 23 because “shark attacks are expected.” Another Aegean resort went one better: “Bodrum will be experiencing heavy snow June 23. We advise you to enjoy the sunshine in Istanbul that day.”

There were serious messages as well. People were asked to contribute to a fund so that temporary workers in the resort of Mugla could take the long-distance bus to Istanbul for June 23. “We’re going in order to take Istanbul back,” the tweet said.

The reactions showed just how much the cancellation of Istanbul’s election has energized the opposition to President Erdogan, who pushed heavily for the decision to overturn the March 31 election results. But energy alone will not be enough. To win the repeat election, the opposition needs a strong case for casting out Erdogan's Justice and Development Party (AKP). And analysts say there is one.

“The economy (on June 23) will be much worse than it was (in the first election),” Ozgur Unluhisarcikli of the German Marshall Fund think tank told Al-Monitor.

Unluhisarcikli said another advantage for the opposition is that “a significant number of voters” of the AKP are not convinced by the electoral council’s reason for voiding the election, namely that a large number of electoral officers were unqualified. These voters “will question why they have to go to the ballot boxes a second time, and why the country has to suffer the economic consequences of a new election.”

A third advantage is that the small left-wing parties, such as the Turkish Communist Party, have said they will not run June 23 and will urge their supporters to vote for Ekrem Imamoglu, the opposition candidate who won March 31, ending 25 years of rule by the AKP and its ideological predecessors. The leftists amount to tens of thousands of voters, but Imamoglu won by only 13,000 votes, so even a small boost could be significant.

More important, however, is the question of whether the third-place candidate on March 31, Necdet Gokcinar, will run again. Gokcinar polled 103,000 votes for the Islamic fundamentalist Saadet Party.

Saadet is a strong critic of Erdogan’s rule, but it is widely thought that if it were to withdraw from the race, its supporters would vote for the mildly Islamic AKP rather than vote for Imamoglu, who is the joint candidate of the secular Republican People’s Party (CHP) and the Good Party (Iyi). Today, Gokcinar tweeted that Saadet’s leadership was “leaning toward” his running again, which would improve Imamoglu’s chances.

A fourth factor in Imamoglu’s favor is that he would benefit from a sympathy vote. Everybody knows the election was canceled because the AKP lost. And the loss of the biggest and richest city in the country could mean that the AKP may no longer be able to expect the “donations” it received from corporations it awarded huge municipal contracts year after year.

“There is no question that people in Istanbul today believe that Imamoglu has been made a victim by the AKP’s initiative,” said Ersin Kalaycioglu, a professor of politics at the city’s Sabanci University. He was referring to the AKP’s petitioning the electoral council for the election to be invalidated.

Kalaycioglu said he believes Imamoglu would win June 23 if the election is free and fair, but he is convinced it will not be. He told Al-Monitor that AKP officials are talking about expanding the voter rolls to include the estimated 200,000 to 400,000 voters who live in Istanbul but who are registered voters in the towns and villages of the countryside where their families come from.

“(The officials) are saying these people should be integrated into the voter lists in Istanbul because they actually reside in Istanbul,” Kalaycioglu said. He said this would be highly unethical because the new election is supposed to be “a replay of March 31 (and) no different than voting on March 31.”

Unluhisarcikli agreed, saying that to enlarge the voter rolls would be “clearly against the law.”

So far, no step has been taken to expand the rolls. It is only a proposal expressed verbally and on social media. But Erdogan’s powers are such that he could make it happen.

Were the rolls to be enlarged by hundreds of thousands of voters, “Who is going to do what?” Kalaycioglu asked rhetorically.

“It will be challenged in court, but the court will simply throw it out,” he said. “There is no judicial independence.”

The government’s ability to manipulate the election process was demonstrated by the electoral council’s decision to invalidate only the mayoral election.

The most likely reason for this inconsistency is that in 25 of the 39 districts in Istanbul, the AKP triumphed.

Hours after Kalaycioglu spoke to Al-Monitor, senior officials of the CHP and Iyi parties filed separate petitions with the electoral council, calling for a re-run of not only the district and mukhtar elections in Istanbul but also for the presidential and parliamentary elections of 2018.

The deputy chairman of the CHP, Muharrem Erkek, told the media afterward that the Supreme Electoral Council had based its Istanbul decision on the inadequate qualifications of the polling officials.

“A good majority of the heads of the polling stations were in charge of the presidential and parliamentary elections that took place in June 2018. If the [Supreme Electoral Council] stands behind its decision on Istanbul, then it should cancel the 2018 elections as well,” Erkek said.

Erkek has logic on his side, but nobody expects his petition to succeed. The Supreme Electoral Council has Erdogan’s power behind it. The most the opposition can hope for is to hold the new election with the same voter rolls and to contain the risks of fraud as successfully as it did in March.

If those hopes are realized, then the opposition could win. Its biggest advantage is Imamoglu himself. Observers say that in the five weeks since the election, he has demonstrated a charisma and leadership ability far exceeding that of the defeated AKP candidate, former Prime Minister Binali Yildirim.

Kalaycioglu praised Imamoglu for avoiding the “kulturkampf” (culture struggle) that Erdogan has made fashionable in Turkish politics. “He’s not stigmatizing the ‘others.’ He’s not following a polarizing language.”

After winning the election, Imamoglu recognized that most of the city council members were AKP members, and he reached out to them.

During his less than three weeks in the mayor’s office (having obtained his certificate of victory April 17), he decreased the costs of public transport for university students and mothers with young children. And he posted the city council decisions on social media.

After his certificate was canceled Monday, Imamoglu addressed a crowd of hundreds outside his house, encouraging them with the words “Everything will be fine.” The sentence became a hashtag on social media.

“He’s a conservative person with a social democratic agenda,” Kalaycioglu said, adding that this confuses his opponents.