While Ankara lawyers express their disappointment that the government rescinded the results of the Istanbul mayoral election, voters are mysteriously added to and subtracted from the electoral roll for the June 23 do-over, even though the roll is supposed to remain the same as for the March 31 election. 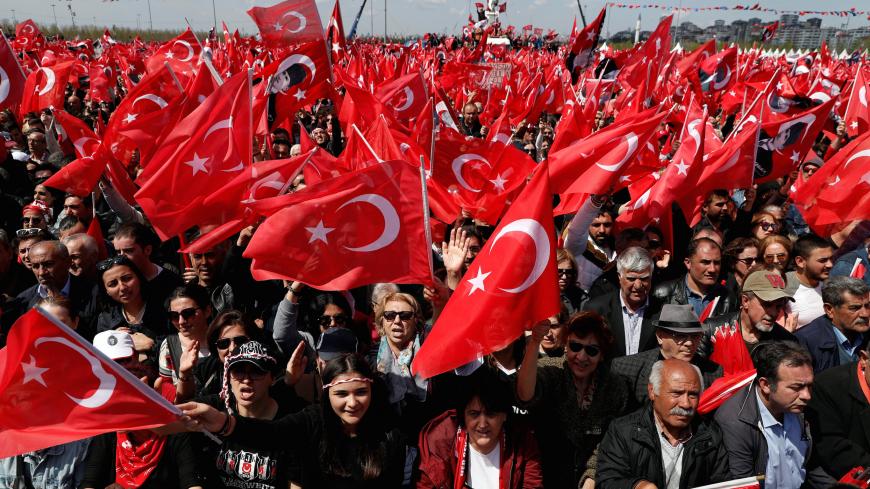 ANKARA, Turkey — A long black banner flaps in the wind down the side of the building of the Bar Association here. Its message expresses what lawyers in Turkey’s capital think of the decision to cancel the Istanbul mayor’s election: “Hukuksuzluğun tam da karşısındayız!” (We are totally opposed to lawlessness!)

This shows how the eyes of the nation’s capital are turned toward a city 500 kilometers (300 miles) down the road.

Across town, President Recep Tayyip Erdogan broke his Ramadan fast with the legislators of his Justice and Development Party in the party headquarters. He urged them to “give their all” for the new mayoral election in Istanbul.

“Every one of our lawmakers should call their fellow citizens in Istanbul and ask them to support our candidate,” he said.

Last week, after many recounts and sustained pressure from Erdogan, the Supreme Electoral Council decided to void the Istanbul mayoral election of March 31. It deposed the man who had been mayor for 19 days, Ekrem Imamoglu of the opposition alliance of the Republican People’s Party (CHP) and the Good Party (Iyi). And it announced the election in Turkey's economic capital would be rerun June 23.

Another politician commented on the election’s nullification. Filiz Keresecioglu, the Ankara lawmaker for the Peoples' Democratic Party (HDP), told the news website Bianet that the people in southeastern Turkey had seen the government depose their mayors many times.

“Now Turkey has seen that what is done in Kurdish regions can also be done in Istanbul and in the west," she said.

The day after he was deposed, Imamoglu told Reuters, “The Istanbul election has become a symbol for democracy.”

Already some un-democratic practices are emerging. The opposition newspaper Cumhuriyet devoted its front-page lead today to those Istanbulites who voted March 31 and have now been taken off the voter roll. The headline said, “Missing Istanbulites.”

Emin Capa told the paper he was astonished when he found both his and his wife’s names had been removed from the roll posted on the electoral council’s website. “I looked again and again because I could not believe it,” he said.

A second voter, Rashan Gulsan, found that not only had her name been struck off, but “two people whom I don’t know appear to be living in the apartment that I have occupied alone for the last 10 years. Unbelievable.”

The newspaper did not explain Gulsan’s ghostly house guests, but it seems that somebody has been adding voters from outside Istanbul to the roll.

Ersin Kalaycioglu, a professor of politics at Istanbul’s Sabanci University, told Al-Monitor that AKP officials had been speaking of expanding the voter roll to include hundreds of thousands of migrants who live in the city but who are registered as voters in the towns and villages from which they hail.

“The AKP has to bring in new voters to change the picture,” Kalaycioglu said last week. Two days later the electoral council declared that the voter roll on June 23 would be the same as on March 31.

But clearly somebody is trying to change the roll. Cumhuriyet took the issue to Canan Kaftancioglu, the head of the CHP in Istanbul. “We know they can do anything,” she said, adding the party was pursuing the matter.

The paper quoted a lawyer as saying those voters who have been struck off the roll should file a written request at the Population Registration Office for the mistake to be corrected.

As for the campaign itself, the ruling alliance of the AKP and the hard-right National Movement Party (MHP) will pursue different strategies to those of the opposition CHP-Iyi alliance. But both camps will try to mobilize supporters from the 15% of voters who did not cast ballots March 31.

The AKP-MHP camp will “ring the alarm bells that if (their supporters) don’t go out and vote, they will lose Istanbul,” said Sinan Ulgen, the chairman of the Center for Economic and Foreign Policy Studies, a local think tank. He told Al-Monitor the AKP would also seek to create a “sense of victimization” among its supporters.

The party is already doing this. Asked why the election was being rerun, the AKP candidate, former Prime Minister Binali Yildirim, told a voter, “It’s very simple: Because they stole it.”

The phrase “Because they stole it” has become Yildirim’s key slogan. And unscrupulous campaigners have been coaxing young children to say it on camera. Videos are circulating on the Web in which an adult asks a child why the election is being repeated, and the child utters the slogan.

Imamoglu condemned the videos as “terrible.” He told Bianet, “I am, first of all, a father of three children. Do not ever take advantage of these children. … Shame on you!”

The videos are the crude face of a contest to capture the sympathy vote.

The role of the victim “has traditionally been very influential in Turkish politics as Erdogan’s own political trajectory demonstrates,” Ulgen told Al-Monitor. He was referring to the president’s portraying himself as the underdog opposed to the elite, as well as Erdogan’s having served four months in jail for incitement in 1999.

For the repeat election, Yildirim will appeal for sympathy by claiming he was cheated March 31. Imamoglu, however, “will try to appeal to the conscience of the AKP electorate by turning (the election) into a contest for a more robust democracy … [and] the fact that he has been the victim of a democratic deficit with the decision of the Supreme Electoral Council,” Ulgen said.

When they play the victim card, both candidates will be addressing the grassroots of the AKP-MHP camp. As Ulgen pointed out, Imamoglu does not need to tell the opposition that he has been victimized. Instead, he will be trying to lure voters from the AKP camp.

In the opposition camp, Imamoglu will also seek to mobilize those who stayed away March 31. “We’re going to see Imamoglu coming out stronger with a message of hope and change, that change is possible,” Ulgen said. He will be telling his grassroots, “Let’s not squander this opportunity.”

It is widely said the CHP did not expect Imamoglu to win March 31, albeit by the tiny margin of 13,000 votes in an election of 9 million ballots. Now that the opposition voters have seen they can win, they will be more likely to vote. And CHP election monitors will be more determined to prevent fraud.

There is one section of the electorate that both camps will endeavor to persuade: the Kurds. Nobody knows how many of Istanbul’s 15 million people are Kurdish as ethnic origin is not a census question. Turkish sources tend to say the city has 2 million Kurds; Kurdish sources say 4 million.

But it is known that the Kurds were decisive in Imamoglu’s victory. The pro-Kurdish party, the HDP, withdrew from the race for Istanbul mayor because it did not want to split the opposition vote, and its imprisoned leader, Selahattin Demirtas, told supporters to vote against the government.

On May 2, in what appeared to be a bid to attract Kurdish voters, the government allowed lawyers to visit Abdullah Ocalan, the imprisoned leader of the Kurdistan Workers Party (PKK). It was the first such visit in eight years.

“We may expect some new initiatives involving Ocalan going forward to June 23,” Ulgen said. He added that making gestures toward Ocalan was risky.

“By trying to capture the Kurdish vote, the AKP may end up alienating the nationalist vote,” Ulgen said.

It is said that for Yildirim to win, all that need happen is for Kurdish voters to stay at home June 23.

But Abdulhakim Dash, the chairman of the Platform of Eastern and Southeastern Associations, an umbrella organization for groups that assist Kurds who migrate from southeast Turkey to Istanbul, told Al-Monitor, “The people are not going to stay at home, nor are they going to vote for Binali Yildirim.”

Dash, who belongs to the HDP, said Kurdish voters in Istanbul were not impressed by the CHP, saying, “It has nothing new to say on the Kurdish problem.” Nevertheless, he said the Kurds will vote for Imamoglu “to cut down the AKP.”