Erdogan's repeat strategic blunders may come to haunt him in the June 23 rerun of the Istanbul vote. 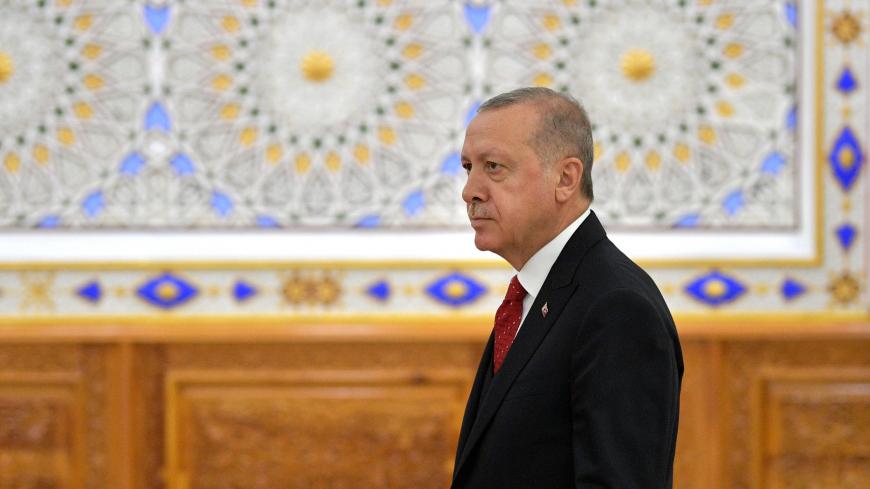 About a month and a half ago, President Recep Tayyip Erdogan was reportedly confident that his Justice and Development Party (AKP) would emerge victorious from a rerun of the mayoral election in Istanbul, which the main opposition’s candidate, Ekrem Imamoglu, won by a margin of 13,000 votes on March 31. The pro-government daily Turkiye reported May 2 that, in meetings with AKP leaders, Erdogan advocated a do-over, saying, “Some colleagues believe the AKP will get less votes or lose if the election is repeated. … I believe 100% that we’ll win if the election is repeated.”

Four days later, the Supreme Electoral Council (YSK) did scrap the vote, ordering a fresh election on June 23. The council made the decision on grounds that the heads of 225 out of 30,000 balloting committees on duty at Istanbul’s polling stations were not public servants as the law requires. However, it found no evidence of “vote theft,” i.e., that those chairpersons doctored the numbers to make Imamoglu win. To use a soccer analogy, the opposition beat the government with an indisputable goal, but the government, unhappy with the result, had the match canceled over a technicality with an issue of the side referee's license.

Yet, with less than a week to go before the rerun of the vote, no change in favor of Binali Yildirim, the AKP candidate, was observed in opinion polls released to the public. Generally, the surveys gave Imamoglu a lead of two to four percentage points.

Reversing the trend has proved an elusive task for the government throughout the campaign. In a rare televised debate with Imamoglu June 16, Yildirim had a mediocre showing, failing to make any difference that could sway voters, real-time opinion polls showed.

In short, Imamoglu is poised to win again and with a larger margin, provided the course of events remains undisturbed and unless some surprise move by the government upends the balance or some big manipulation at the ballot boxes skews the result.

The cancellation of the original vote without any legitimate justification appears to have also annoyed some voters of the People’s Alliance, comprising the AKP and the Nationalist Movement Party (MHP). This sense of injustice might also bear on the result to some extent, contributing to the government’s loss of Istanbul.

Yet Imamoglu’s victimhood is not the sole reason that makes the cancellation of the March 31 vote the biggest tactical mistake in Erdogan’s political career. A defeat for Yildirim on June 23 is likely to have an array of consequences, as explained below.

First, Erdogan might see the defeat chalked up on his scoreboard rather than that of Yildirim’s, regardless of how low a profile he has kept this time, unlike the March 31 elections. After all, it was his political will that led to the cancellation of the original vote.

In public perception, a defeat will further crystalize the fact that Erdogan and his government have lost strength and are riding on a growing downward momentum. Erdogan and his candidate will have lost to an opponent who was a little-known district mayor until December when the Republican People’s Party (CHP) fielded him to run in the Istanbul race.

The notion of a domestically weaker Erdogan with waning popular support would sink in among his foreign counterparts. And because he has used his grassroots support to project power abroad, his loss of power at home would reflect on the international scene.

Pro-government quarters, to which some revenues of the Istanbul municipality are being funneled, and the social networks that benefit from them, would be deprived of major funds financing AKP politics.

The trend of unraveling within Erdogan’s party would gain momentum. The efforts to create a new party, led by the AKP’s former economy tsar, Ali Babacan, and backed by former President Abdullah Gul, would accelerate. The same goes for the party that former Prime Minister Ahmet Davutoglu aspires to create.

Had the government accepted the March 31 defeat, the resulting downsides could have been less severe than the inevitable consequences it faces from a potential defeat on June 23. Had Erdogan acquiesced to losing Istanbul and letting Imamoglu stay on as mayor, the quarter-century local dominion of political Islam in Istanbul would have ended, but managing that defeat would have been easier than managing a defeat in the rerun.

If nothing else, the world would have seen that political Islam was capable of respecting election results and that political change in Turkey was possible through elections. By refusing to acknowledge the result in Istanbul, the government has suffered a huge loss of legitimacy, the gravity of which will be better understood in the long term. This loss of legitimacy will be impossible to compensate in full even if Erdogan accepts an eventual defeat on June 23.

Had the electoral board rejected the AKP’s cancellation request, the AKP could have perpetuated the propaganda that Imamoglu owed his victory to stolen votes, no matter the accusation was impossible to prove. After June 23, they will no longer have this chance.

If Imamoglu wins again and is allowed to take over the city’s local administration, Erdogan could still use his control of the central government to besiege the CHP mayor, tie his hands and paralyze his projects to some extent. This political advantage, however, does not change the fact that forcing a redo of the election was Erdogan’s biggest ever tactical mistake.

Alternatively, if Yildirim emerges victorious from the redo, it would become harder to argue that political change is possible through elections in Turkey, and any future election held under the current government would come under a thickening shadow of legitimacy loss. The ballot boxes — the sole source of legitimacy for Turkey’s government — would become questionable in this respect.

The opposition’s thrust in Istanbul — Imamoglu got 48.8% of the vote March 31, well above the 26.4% the CHP got in the city in last year’s parliamentary polls — is similarly the result of a strategic mistake by Erdogan. Had he not imposed his dream of an authoritarian presidential regime on Turkey, taking advantage of the botched coup attempt in 2016, he would not have spurred the opposition to unite against him. Now, if Imamoglu pulls off an even stronger victory in the rerun vote, it will again be the result of Erdogan’s strategic mistake.

As part of the executive presidency regime, which Erdogan got approved on a constitutional referendum in 2017, he introduced the condition that the omnipotent president must be elected by more than 50% of the vote. Then, ahead of the presidential polls in 2018, he pushed amendments through parliament that allowed parties to formally make alliances. In contrast, the old parliamentary system did not require one to get more than 50% of the vote to rule the country. By imposing the presidential system, Erdogan not only rendered himself dependent on his far-right ally, the MHP, but drove the opposition to join forces under the umbrella of the Nation Alliance.

Meral Aksener, the leader of the Good Party, the CHP’s ally, asserted her commitment to the alliance June 14, saying, “Imamoglu will win this election with an even bigger margin — he will win, even if we don’t do any [electioneering] work.”

The Peoples’ Democratic Party, which dominates the kingmaking Kurdish vote, has also confirmed it will stick to its strategy of March 31, which saw the party focus on mayoral races in eastern regions with sizable Kurdish populations, while sitting out those in big cities in the west to help defeat the AKP. Party co-chair Pervin Buldan said June 15, “The peoples of Istanbul, the alliance of Turkey won the Istanbul municipality on March 31. But they stole Istanbul. … We have formed an alliance of democracy to teach another lesson to the AKP and the YSK on June 23 over their lawlessness and injustice.”

The challenges that Erdogan is facing as a result of his two biggest mistakes — one tactical, the other strategic — will grow further after June 23, and countering them will become even more difficult.