Erdogan could lose more than Istanbul in high-stakes electoral gamble

With many Turks outraged over the nullification of Istanbul's election results, the oppression of dissent and violence expected going into the rerun could backfire on the increasingly authoritarian president. 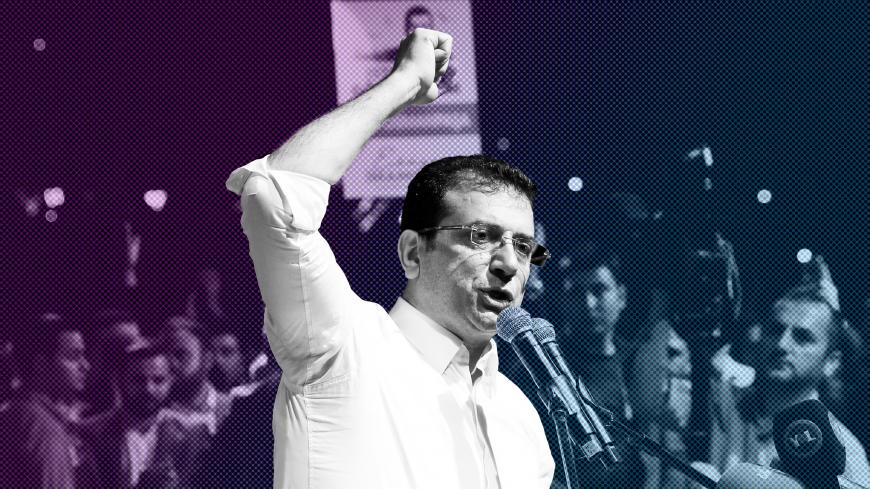 Ekrem Imamoglu of the opposition Republican People's Party (CHP), who was elected mayor in the March 31 elections, addresses his supporters after the election board decided to redo the mayoral election, Istanbul, Turkey, May 6, 2019. - REUTERS/Murad Sezer

After the Turkish election board’s decision to nullify the results of Istanbul's municipal elections, Turkey is stepping into new territory. We can expect further oppression of dissent and even violence to set a climate that will ensure victory for Turkish President Recep Tayyip Erdogan’s ruling party in a do-over vote.

While not unexpected, the ruling of the Supreme Election Council (YSK) for a rerun election in Istanbul touched nerves. It is unsettling for not only the Istanbul electorate but all Turks as well as the international community, which has been watching Turkey closely.

The March 31 elections that ended of the Justice and Development Party’s more than two decades in control of country’s main commercial hub will be repeated on June 23, thanks to the YSK's seven members who voted in favor of a rerun. Four who opposed it as a violation of the rule of law.

The ruling came more than a month after Erdogan and his ultranationalist ally, Nationalist Movement Party leader Devlet Bahceli, asked for rerun.

Turkey’s opposition saw two silver linings in the decision: First, the YSK’s decision was the latest nail in the coffin of Turkish democracy and the AKP can no longer claim democratic legitimacy. Second, if there is a man who can navigate these choppy waters, it is Ekrem Imamoglu, Istanbul’s elected mayor who run on the ticket of an alliance led by the main opposition Republican People’s Party (CHP).

The general sentiment among the opposition voters is that Imamoglu will win again by an even bigger margin, with voters outraged that the country’s judiciary yielded to the increasingly autocratic president.

Although many opponents called for a boycott of the redo, the CHP ruled out the idea after a meeting convened immediately after the announcement of the electoral nullification. The main opposition party's decision is clear: There will be no boycott and it will participate in the rerun despite its anger at the YSK’s decision. CHP head Kemal Kilicdaroglu asked for the resignation of the council members, describing the decision as “black stain” on the country’s democratic history.

The YSK has inadvertently enhanced the standing of a political figure who can defeat and replace Erdogan. Imamoglu displayed a very calm, self-controlled and optimistic outlook in his address to the media immediately after the announcement. He is no more the mayor of Istanbul, but his charm offensive is exceeding the city's limits. He is most formidable candidate yet to take on Erdogan, who was once presumed invincible. Now that image has been shattered.

Yet the YSK’s decision revealed another fact: Erdogan will not leave his office peacefully and elections may not suffice for a change of guard in Turkey.

Never before has a losing candidate in Istanbul refused to recognize the outcome of an election. But Erdogan’s ascent to the power began in Istanbul and he cannot afford to lose it. For that reason, the public worries he will do everything in his power to win even if it means foul play. Many believe cheating would be easier than ever, considering the YSK's disgraceful lack of independence.

The five months between the June 6 general elections and the Nov. 1 general elections in 2015 showed what he is capable of. In the June 6 vote, Erdogan’s AKP lost its parliamentary majority. Yet instead of conceding, Erdogan insisted on a rerun. The country was pushed into a political crisis with severe violence, including terror attacks. On Nov. 1, Erdogan power was restored.

A similar trajectory can be expected before June 23. Erdogan’s machinations could include an escalation of violence regarding the Kurdish issue to break the electoral alliance between the pro-Kurdish Peoples’ Democratic Party, the CHP and the Good Party. With Erdogan in overwhelming control of the media, such provocations and violence could feed an urge for stability among the Istanbul electorate and he could ride these fears again to victory.

The divide-and-conquer tactics could pay off even as they destroy the social fabric of Turkish society.

Turkey will remain caught in a cycle of violence, oppression and violation of fundamental freedoms in the foreseeable future. Nonetheless, given the impact of the economic crisis and the Istanbul public's outrage over the electoral injustice done to it, there is a chance that Erdogan will be again and much more strongly defeated in the rerun. If so, his credibility and power as the president will suffer damage much worse than it took after March 31.