The new HDP mayor of Diyarbakir calls for a Kurdish vote against the AKP in Istanbul's mayoral election rerun and says his AKP predecessor has left Diyarbakir in the poorhouse. 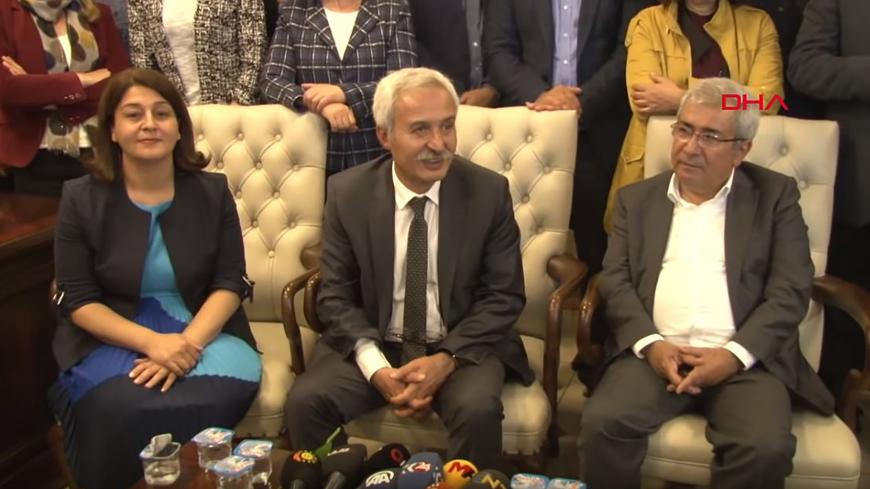 DIYARBAKIR, Turkey — In the coming election in Istanbul, the Kurds will “stand by the victim against the usurper,” the new mayor of Diyarbakir, Adnan Selcuk Mizrakli, says.

“We will not allow thieves like [Binali] Yildirim to succeed,” Mizrakli told Al-Monitor in an interview in the city’s cultural center, referring to the candidate of the Justice and Development Party (AKP). Mizrakli had been asked which way he would like his Kurdish brethren in Istanbul to vote now that the Supreme Electoral Council has invalidated the March 31 election in Turkey’s biggest city and called a new poll for June 23.

The electoral council said a new vote was required because many of the polling-station supervisors had not been civil servants, as required by law. But it gave no evidence that this transgression, a common occurrence in elections, had altered the results.

The rerun is widely seen as a move made under pressure from President Recep Tayyip Erdogan of the AKP. Yildirim, a former prime minister, had lost May 31 to the opposition’s Ekrem Imamoglu by a mere 13,000 votes. During its long rule of Istanbul, the AKP has built a network of close relationships with city council contractors who contribute generously to the party’s coffers.

Turks are now holidaying during the Islamic feast of Eid al-Fitr, but when the election campaign starts in earnest next week, Erdogan and the AKP are expected to do all in their power to persuade Istanbul’s Kurdish voters either to vote for Yildirim or, if they find that unpalatable, to stay at home.

Abdulhakim Dash, the chairman of the Platform of Eastern and Southeastern Associations, an umbrella organization for groups that assist Kurds who migrate to Istanbul, told Al-Monitor he expects the government to bring in pro-AKP Kurdish elders from southeastern Turkey.

Kurds will not be impressed by any AKP appeals, said Mizrakli, whose city is the virtual Kurdish capital of Turkey.

Even before the electoral council canceled Imamoglu’s mayoral certificate, it had disqualified 10 candidates of the pro-Kurdish Peoples' Democratic Party (HDP) who won in the southeast’s local elections. It gave victory to the candidates who came in second — and they all belonged to the AKP.

The electoral council said it was enforcing the rule that people dismissed from the civil service could not hold public office. But it did not explain why it had accepted such candidates in the first place. Once again the electoral council was seen to be giving in to political pressure. Erdogan has frequently accused the HDP of supporting terrorists, a charge the party denies.

“This intervention undermined the people’s will and the rule of law,” said Mizrakli, who is an HDP member. His co-candidate for mayor in the March 31 election, Hulya Alokmen Uyanik, was disqualified because she, too, had been a civil servant dismissed in the purge that took place after the 2016 coup attempt.

“From western Turkey and Istanbul, there has not been a protest, not even a weak one [against the electoral council’s disqualifying the HDP winners],’’ he continued. “Despite this unfaithfulness, Kurds are committed to democracy because what Imamoglu went through is something we know very well.”

In fact, Kemal Kilicdaroglu, the leader of Imamoglu’s party, the Republican People’s Party (CHP), did condemn the disqualification of the winning Kurdish candidates.

“To say ‘I don’t give you the mandate’ to a person whom you allowed to take part in the elections is against democracy and the rule of law,” Kilicdaroglu was quoted as saying April 18 by the Bianet news site.

Mizrakli is proud of Imamoglu’s March 31 victory, saying it gave a “doping-like boost to democratic forces in Turkey.” He points out that Kurds contributed to Imamoglu’s success because the HDP did not field a candidate in Istanbul to avoid splitting the opposition vote.

On June 23, Mizrakli told Al-Monitor, “Kurds will walk toward democracy, rule of law and tomorrow’s hopes and freedoms.”

Mizrakli is the first elected person to move into the Diyarbakir mayor’s office since the government detained the co-mayors Gultan Kisanak and Firat Anli in October 2016, accusing them of terrorism. A month later the government appointed a professional civil servant, Cumali Atilla, to run the city of 930,000 people. The government deposed elected mayors and appointed administrators in more than 90 towns of the southeast.

At the same time, the government opened its purse to the administrators, giving them far more funds than the Kurdish mayors had enjoyed. Ankara seems to have hoped that the administrators’ benevolence would persuade voters to support the AKP in the next elections.

It did not work in Diyarbakir. On March 31, 63% of voters stamped their ballots for Mizrakli, a surgeon turned politician, and only 31% voted for Atilla.

In the interview, Mizrakli accused Atilla of a “reckless use of public money.” As an example, he said his predecessor had authorized the purchase of 1.8 tons of kadayif, a Turkish sweetmeat.

On the day he got his mayor’s certificate, Mizrakli entered his new offices with the press. He was dismayed by the chandelier and marble-clad washroom that Atilla had installed.

“We’re now examining all their financial transactions, one by one. I’m personally looking at all the expenditures for health care — checking what was bought against the market price,” Mizrakli said.

So far they have found the city has what Mizrakli called a "huge debt" of 759 million Turkish liras ($130 million).

Diyarbakir is rich in history. Built on the banks of the Tigris River, it has been favored by conquerors for centuries. Today the city’s traffic flows through the narrow gates of the massive, black basalt walls that were built, destroyed and rebuilt during the Middle Ages. When Richard the Lionheart fought Saladin (a Kurd) for control of the Holy Land, Diyarbakir was on the crusaders’ map, but it was called Amed. Kurds use the name today.

Hasan Pasha Han is arguably the finest caravanserai in Turkey. A two-storied structure in black and white stone, it serves everything from breakfast to water pipes to Kurdish delicacies until late at night. Its high-stepped staircases test the fitness of the visitor.

Yet few western Turks come to Diyarbakir. Decades of Kurdish insurgency have given the southeast an unwelcoming image.

When Al-Monitor asked Mizrakli how he hoped to overcome this, he said western Turks have a prejudice against Kurds.

“They like to say that Turks and Kurds are like bone and flesh, but do Turks speak our language? They can sing English songs, but can they sing a Kurdish song?

“In central Diyarbakir one can walk the streets and feel as safe as if one was in Ankara or Istanbul. Feeling secure is not related to their being enough ‘security’ forces, but to the trust that exists between people.

“Tourists who come will be welcomed,” he continued. “And they will leave happy.”