While Turkey awaits an official decision in the Istanbul mayor's race, electoral authorities void HDP victories in Diyarbakir and elsewhere in the southeast. 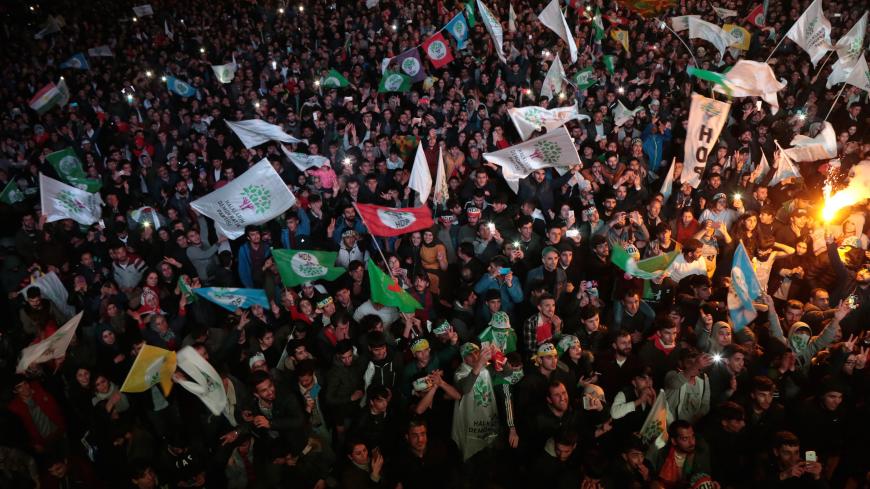 ANKARA, Turkey — Two weeks after they voted, Turks are still waiting to know whom the Supreme Electoral Council will declare to be the mayor of Istanbul. Not a day passes without the ruling Justice and Development Party (AKP) finding a reason to discredit the provisional result, which favors the opposition by a narrow margin. Some days the council orders a recount in a certain district; other days it dismisses the objection.

At the opposite end of Turkey, a different process is occurring. In Diyarbakir and other southeastern provinces, the results are not disputed. Everybody knows who won. But the government is leaning heavily on the electoral council to refuse to give the winners their certificate of electoral victory.

Last week, the electoral council announced it would not recognize the winners in eight electoral districts in the southeast. Instead it would give the certificate to the candidates who polled second in those districts. The council said it was enforcing the law that barred people who had been dismissed from the civil service from holding electoral office. The eight winners were victims of a controversial decree that President Recep Tayyip Erdogan issued after the attempted coup of 2016. The edict has been used to fire more than 100,000 civil servants.

But the real reason had to do with the political color of the winners. They all belonged to the Peoples' Democratic Party (HDP), the pro-Kurdish party whom Erdogan accuses of being aligned with the militant Kurdistan Workers Party (PKK) — a charge the HDP denies. The candidates who polled second in the eight districts all belonged to the AKP.

The HDP said the electoral council’s move was “scandalous.” On Friday, the party’s deputy chairman and legislator for Diyarbakir, Hisyar Ozsoy, said that when the winners filed their candidacies in February, “the council found all of them eligible to run in the elections. Had the council denied their candidacies in February, we could have nominated other candidates.”

It is widely suspected that in February, the council overlooked the HDP candidates’ dismissals under Erdogan's decree knowing full well the candidates were likely to be elected, and could be barred from taking office afterward.

Ozsoy accused the council of laying “a very ugly and unlawful trap for the HDP.”

One of barred winners is Zeyyat Ceylan, who was a teacher until he was dismissed by the decree. He and his female co-candidate (the HDP nominates a man and a woman) were elected in the Baglar district of Diyarbakir.

“(The council) gave me the license to take part in the election, but nine days later, after I had received 116,000 votes, they said they could not give me the certificate. They would give it to the candidate who came second with 42,000 votes,” Ceylan told BBC Turkish. “This is not justice; this is cruelty.”

Observers said that when the council’s move was announced, a crowd of about 100 people protested outside the Baglar municipal building. The suburb is a hotbed of Kurdish nationalism. Whenever there is unrest in Diyarbakir, Baglar is the place where protesters set garbage cans on fire and push them into the middle of the street.

In that sense, it was surprising that last week’s protest was not bigger.

Diyarbakir businessman Shahismail Bedirhanoglu said the small number of protesters showed how much support the HDP has lost owing to its mistakes in previous confrontations with the government. In addition, the party had not run a very active campaign in the city.

“People voted for the HDP, but they don’t support the HDP in terms of taking to the streets,” Bedirhanoglu told Al-Monitor. “I told HDP officials that they owed a debt to Erdogan and [Interior Minister] Suleyman Soylu because people voted against them [Erdogan and Soylu] rather than for the HDP.”

Diyarbakir lawyer Sedat Yurtdas, who was a Kurdish member of parliament 25 years ago, criticized the electoral council’s move on legal grounds, telling Al-Monitor, “There is nothing in the law about assigning victory to the second-place candidates.”

A second lawyer, a university academic who declined to be named, confirmed what Yurtdas said. He told Al-Monitor that what the electoral council had done was a matter of “imposing politics on the law.”

When Al-Monitor approached the electoral council for a response, an official said council members did not answer questions on the phone, only at press conferences.

Yurtdas said the people in the streets of Diyarbakir disapprove of the council’s decision, but he did not think it would lead to violence. The Kurds had other concerns at the moment, such as the hunger strikes among prisoners calling for an end to the isolation of the imprisoned PKK leader Abdullah Ocalan.

But the reversal of the election results, Yurtdas told Al-Monitor, “has destroyed people’s faith in the electoral system. It harms their faith in democracy and law. It destroys their belief that radical, pro-democratic change can come about through elections.”

In southeastern Turkey, when young men and women flee to join the PKK, people say they have “gone to the mountains.” Bedirhanoglu did not think the election reversal would drive people to the mountains because “people expected the government to take over the municipalities by any means.”

In 2016-17, Erdogan ousted the mayors of more than 90 Kurdish towns and districts, including the co-mayors of Diyarbakir, and appointed trustees to run their municipalities. During the recent campaign, Erdogan repeatedly threatened to do the same if the people elected pro-PKK mayors.

“If the government dismisses many more mayors, the PKK may see it as a justification for an attack,” Bedirhanoglu said. “This will cause serious problems. It will weaken the desire among Kurds to live together with Turks. I hope the government will step back from dismissing the elected mayors.”