Turkey's ruling AKP has insinuated that the opposition's winning mayoral candidate for Istanbul Ekrem Imamoglu is secretly Greek to discredit his campaign in a move that seemed to backfire. 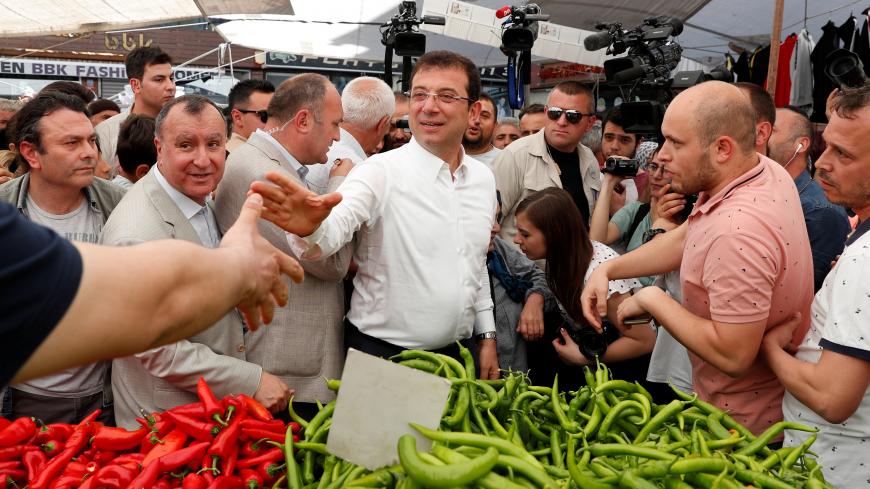 As the campaign for the controversial do-over of the Istanbul mayoral elections heats up, Turkey’s ruling Justice and Development Party (AKP) and its supporters are employing a new strategy to discredit the main opposition candidate, Ekrem Imamoglu. They claim his candidacy is being supported by Turkey’s longtime enemy Greece because Imamoglu is secretly Greek and by extension, Christian. The claim is based on Imamoglu's roots in Trabzon, a province on the Black Sea ruled in ancient times by Persians and Greeks and known as Pontus.

The parry by the AKP's deputy chair, Nurettin Canikli, was typical. He said, “The Greeks are saying Ekrem Imamoglu is Greek. There are many questions and doubts. You should prove that your spirit, heart and mind are with the Turkish nation.”

But the AKP’s efforts to stir nationalist passions has had a boomerang effect. Imamoglu was given a hero’s welcome in Trabzon yesterday as a sea of locals flocked to welcome him and hear him speak. The AKP had not reckoned for millions of voters from the region feeling personally affronted by the claims.

Burak Kadercan, associate professor of strategy at the Naval War College, explained their reaction in a tweet. The party had “inadvertently offended an entire region by implying that they might be crypto-Greeks [and] Christians” and Imamoglu seized the opportunity by “turning the AKP’s attack on its head.”

“No matter their ethnic roots, we respect [all] 82 million citizens living in this country,” Imamoglu told Trabzon’s roaring crowds.

The scenes were repeated in a string of Black Sea cities where Imamoglu spoke. From Zonguldak in the west to Rize in the east, every single Black Sea province had given the AKP and its leader, President Recep Tayyip Erdogan, a majority in parliamentary and presidential elections that were held concurrently in June 2018. In Trabzon, Imamoglu’s pro-secular Republican People’s Party (CHP) garnered a measly 15%. Its presidential candidate, Muharrem Ince, another Black Sea man, fared only slightly better at 20%.

Recent opinion polls show Imamoglu leading his AKP rival, Binali Yildirim, by as much as nine percentage points. But pollsters say a clearer picture will emerge when they return to the field next week after the extended end-of-Ramadan holiday. The pair are expected to square off in a televised debate.

Stumping in the Black Sea region was strategic. Residents of Black Sea descent are believed to be the largest voting bloc in Istanbul. Erdogan’s own Black Sea background — in Rize — has served him well during his 16-plus years of uninterrupted power. But Imamoglu has also reached out to the Kurds, another critical demographic. Because official census data does not include ethnic backgrounds, it's impossible to say for sure, but Kurds are thought to account for 17% of Istanbul’s electorate.

Imamoglu won the March 31 elections in Istanbul by a very narrow margin with the Kurds helping tip the outcome in his favor. He was stripped of his seat when the Supreme Electoral Commission upheld the AKP’s dubious claims that members of various electoral boards in Istanbul were unqualified to serve. This week, the commission set off further controversy by saying the same boards would be in place for the re-run even as they are being investigated for their alleged mischief.

The main Kurdish bloc did not field a candidate in Istanbul, telling its base to vote tactically for Imamoglu instead. They are expected to do so again. Should Imamoglu succeed in peeling away enough AKP supporters, he will likely win again — assuming that the elections will be fair and free. The annulment of the March 31 ballot bodes ill in this regard. Excited commentary about how Imamoglu can topple Erdogan when he runs for president may well prove premature.