The latest move against Ekrem Imamoglu comes as Turkey’s opposition weighs which candidate would stand the best chance against Erdogan. 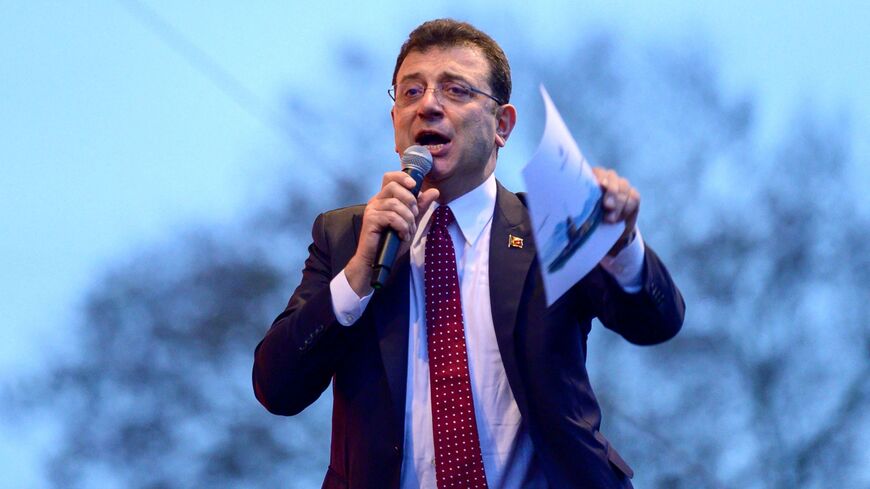 Istanbul Mayor Ekrem Imamoglu delivers a speech for his supporters during a protest in front of the Istanbul Metropolitan Municipality in Istanbul on Dec. 15, 2022, after a Turkish court sentenced banned him from politics ahead of next year's presidential election. - YASIN AKGUL/AFP via Getty Images

Istanbul’s mayor Ekrem Imamoglu is facing prosecution over alleged corruption, Turkey's judiciary announced Wednesday, the latest in a series of legal cases aimed at removing him from power, according to opposition officials.

The Turkish ministry of interior has investigated complaints that while he was mayor of Istanbul’s Beylikduzu district from 2014-2019, Imamoglu awarded a public tender to an unqualified company. The case is due to be heard on June 15. Prosecutors are seeking a maximum seven-year prison term for Imamoglu and six co-workers on charges of graft. They also want him banned from politics on the same charges.

In a ruling in December, Imamoglu was already barred from politics and sentenced to nearly three years in prison for criticizing Turkey’s Supreme Electoral Board. The board had ordered a controversial redo of the 2019 municipal elections that favored the main opposition pro-secular Republican People’s Party (CHP) in several key cities, including Istanbul. Imamoglu, 52, won by a landslide in the repeat election, marking the first time an opposition figure handed Turkey’s President Recep Tayyip Erdogan such a resounding defeat.

Imamoglu remains in office pending an appeal. The big question is whether the court will deliver its final verdict ahead of the elections, which are due by June 18 at the latest.

Erdogan's own rise was due in part to his stint as mayor of the megalopolis of 16 million-plus in the early ’90s. His term was cut short after he was sent to prison for reciting verses by an adulated poet at a public rally. Patronage dispensed by the municipality helped Erdogan forge critical alliances with the business community, mainly with contractors.

Imamoglu is, like Erdogan, a native of Turkey’s Black Sea region, where many of the construction tycoons hail from. A former contractor himself, Imamoglu has the potential to flip them to the opposition’s side. His appeal cuts across ethnic, sectarian and class lines, his supporters claim, to include the Kurds, secular liberals, Sunni conservatives and the business elite.

In the presidential race, opinion polls consistently put him ahead of Erdogan, whose once-unassailable popularity has slumped in the midst of Turkey’s worst economic downturn since 2001.

Erdogan’s persecution at the hands of the judiciary, then in league with the country’s fiercely anti-Islamist generals, helped to rally millions of pious Turkish Sunnis behind him. Will Imamoglu’s plight have a similar impact? “It all depends on what the opposition does with it,” said Roj Girasun, who runs Rawest, a research and polling firm that focuses on the country’s estimated 14 million Kurds.

“If they use it to score points against each other in the ongoing battle to name a presidential candidate, this can only benefit Erdogan,” Girasun told Al-Monitor. “As things currently stand, the opposition projects an image of disarray.”

Levent Gultekin, a prominent government critic, complained on the independent news channel Medyascope TV, "The opposition's first order of business should be to win the election," but instead, "they are busy squabbling over who should get which ministry."

Imamoglu is at the center of the ongoing power struggle over who gets the presidential nomination from the CHP-led alliance of six opposition parties. The CHP leader, Kemal Kilicdaroglu, covets the role, but his detractors claim that with his lackluster campaigning style, Kurdish roots and Alevi faith, he would be mincemeat for Erdogan. The anti-Kilicdaroglu crowd argue that Erdogan is seeking to eliminate Imamoglu from the race precisely because he believes the CHP leader poses no threat to him. That view is shared by Meral Aksener, the leader of the right-wing nationalist Iyi or Good party, who is backing Imamoglu.

A showdown is expected at the next gathering of six opposition parties on Jan. 26, hosted by Aksener.

The pro-Kurdish Peoples’ Democratic Party (HDP) was not invited for fear of alienating nationalist voters, who believe the prosecutors’ claims that they working with the outlawed Kurdistan Workers’ Party (PKK). The Constitutional Court narrowly voted in favor of suspending crucial Treasury funds to the HDP last week until the case is finalized.

With between 10-12 percent of the vote, the HDP is credited with holding the key to victory, as it did when its Kurds voted in droves for Imamoglu in the Istanbul redo. But the HDP threw a wrench into the works when it declared over the weekend that it would be fielding its own presidential candidate.

The HDP is widely believed to be leaning towards Kilicdaroglu in any runoff — which might be inevitable if they run their own candidate, as no single candidate would then be likely to score the 50 percent of the vote needed to win in a first round.

Girasun believes that move may force Aksener and Iyi to accept Kilicdaroglu. With Iyi consistently polling above the HDP, one of the opposition's biggest challenges is how to bridge the gap between the nationalists and the Kurds without alienating either side. Erdogan discovered this was an impossible balance when he lost his majority in the June 2015 elections.