Istanbul's popular opposition mayor hit a pothole on his informal presidential campaign trail when a photograph sparked outrage and he responded, some detractors say, like an aspiring Recep Tayyip Erdogan. 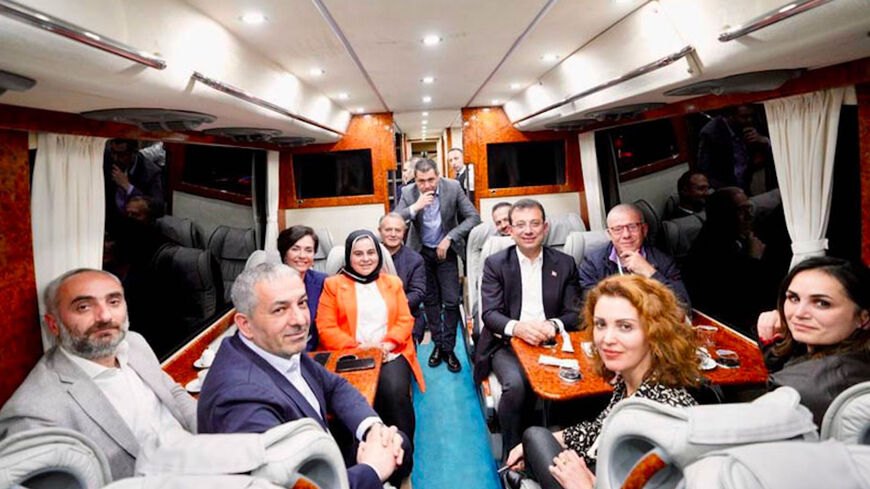 Istanbul Mayor Ekrem Imamoglu appears surrounded by a group of journalists aboard his tour bus. - TWITTER

Ekrem Imamoglu, the mayor of Istanbul, has long been seen as the single man most likely to unseat the country’s President Recep Tayyip Erdogan in elections that are due to be held by the summer of 2023. However, a public relations faux pas and his flippancy in its aftermath have bruised Imamoglu’s presidential aspirations, leaving Erdogan and his supporters gleeful.

The controversy erupted last week during a tour of his native Black Sea region. The trip was supposedly to celebrate the Eid al-Fitr holiday marking the end of Ramadan. But few doubted Imamoglu’s true intentions, though he denied them: The coastal lap was the opening shot of his undeclared campaign to become the opposition candidate for the presidency. Thousands thronged to his rallies, with many people coming up to Imamoglu exhorting him to run against Erdogan.

Things went rapidly south, however, following the publication of a photograph showing Imamoglu surrounded by a group of journalists aboard his tour bus. Seated next to him was Ertugrul Ozkok, the much reviled former editor-in-chief of the once influential Hurriyet newspaper. Ozkok drove decades of coverage promoting military tutelage, suppression of the Kurds, demonization of the Islamic headscarf and the naked pursuit of his bosses’ financial well-being. Directly across Imamoglu was Nagehan Alci, a journalist whose career critics charge prospered in parallel with her exuberant support for Erdogan.

The image provoked an outcry with many supporters airing feelings of betrayal. More than 50,000 followers deserted him on Twitter.

In theory, Imamoglu was doing the right thing. He was seeking to signal inclusiveness by inviting journalists representing different views and sharing his message to those who didn’t agree with it. While he might have come up with less controversial figures, the furor would have probably died down had he come up with a conciliatory response. Instead, a defiant Imamoglu used a Turkish expression to say he couldn’t care less and another to warn his detractors to “wise up.” For his earlier critics, who long likened the former construction magnate to an aspiring Erdogan — ambitious, ruthless and inherently authoritarian  — Imamoglu’s mask had come off.

“If he had 10 things going for him, eight of those things are now gone,” conservative writer Tarik Celenk told Al-Monitor.

It’s too early to write him off, and the government will have contributed to the sympathy vote by filing criminal charges against the mayor claiming he had used public funds to finance his Black Sea junket. Prosecutors have filed numerous other charges against Imamoglu, most recently for insulting members of Turkey’s Supreme Electoral Board. He could face up to four years in prison if convicted.

Imamoglu dethroned the AKP in an upset in the March 2019 municipal polls, which saw many other AKP mayors lose their seats. Erdogan ordered a redo claiming fraud, only to see Imamoglu win with an even bigger margin. The government has since been seeking to thwart him at every turn. Its war with Imamoglu is reminiscent of the early 1990s, when Erdogan became Istanbul’s first Islamist mayor and was briefly jailed for reciting verses from a nationalist poem deemed to incite a religious rebellion.

Unlike Mansur Yavas, a fellow opposition Republican People’s Party (CHP) mayor for Ankara, Imamoglu has — or had — broad appeal. Born to poor and pious parents, he could tap into conservative, Kurdish and urban secular votes alike.

Some analysts say power has changed him. Roj Girasun, who runs RAWEST, a polling and research outfit in Diyarbakir in the country’s heavily Kurdish southeast, said that after winning the elections, Imamoglu “stopped mingling with ordinary folk and his positive image began to fade.” Imamoglu has since steadily slid into a more visibly secular mode, embracing many of the Western symbols attributed to modern Turkey's founder Kemal Ataturk. Girasun points to a waltz performance Imamoglu organized to mark Aug. 30, when Turkey’s armed forces prevailed against their Greek enemies in 1922.

The waltz is associated in pious minds with Ataturk’s drive to stamp out all Islamic manifestations from public life by imposing Western culture. Imamoglu’s overreliance on public relations stunts paved the way for last week’s blunder. “Conservative voters were already falling away,” Girasun said.

Celenk argues that it’s the conservative business class rather than the broader masses who saw a potential partner in Imamoglu. “He is someone they could do business with, join forces with for mutual profit. A man who has no particular set of principles or ideology. The rest, however, are more inclined to follow whoever their sheikhs or congregational leaders tell them to,” said Celenk. Imamoglu is like Erdogan “but without the messianic appeal,” Celenk added.

The broad consensus is that the immediate beneficiary of the Black Sea affair is Yavas, who is also known to nurse presidential ambitions. But he has avoided controversy by saying little and getting on with the job. Recent opinion polls suggest that in a runoff with Erdogan, he would bag 70% of the vote. This is somewhat surprising as many Kurds find Yavas too rigidly nationalist — some call him a fascist — and most political analysts contend that the Kurds are poised to swing the result, as they did in the 2019 municipal contest.

Another beneficiary is the CHP's leader, Kemal Kilicdaroglu, who is also known to want the country’s top job and has asked Imamoglu and Yavas to stick with their current roles. But as Alci, the journalist suggested in her most recent column for Haberturk, the biggest of all is undoubtedly Erdogan, whose popularity has been waning amid a ballooning economic crisis.

The debate over Imamoglu, with celebrities weighing in, is helping detract public attention from inflation, which has now hit 70%, and the downward spiral of the Turkish lira, which sunk to 15 against the dollar today. They “are having a collective fit that will benefit [the man] they actually don’t like at all, Recep Tayyip Erdogan,” Alci concluded.