Ekrem Imamoglu of the Republican People’s Party took his campaign to Rize on the Black Sea coast during the Eid al-Fitr holiday. 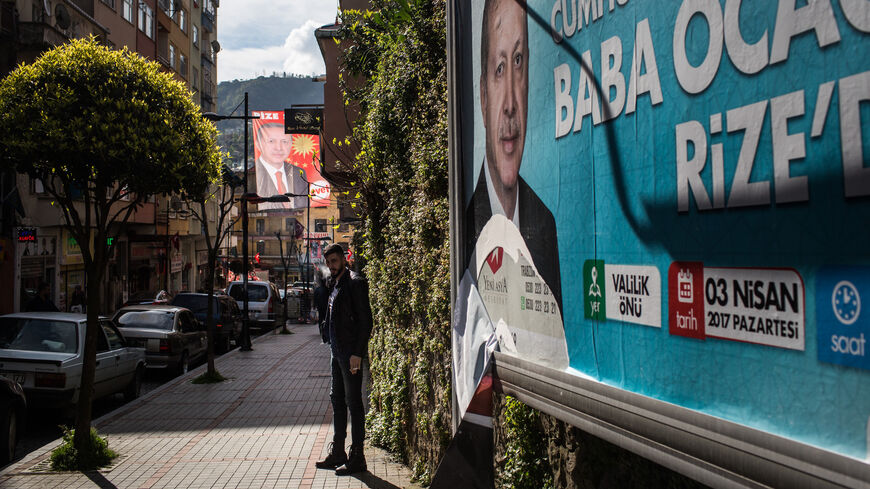 A man smokes while standing in front of banners and posters showing the portrait of Turkish President Recep Tayyip Erdogan on April 10, 2017, in Rize, Turkey. - Chris McGrath/Getty Images

ISTANBUL — The opposition mayor of Istanbul has stirred up controversy during the Ramadan holiday with a visit to President Recep Tayyip Erdogan’s home province on the Black Sea coast.

Ekrem Imamoglu, who won a landslide victory for the Republican People’s Party (CHP) in 2019, was greeted by cheering crowds as he arrived in Rize for the Eid al-Fitr break.

Erdogan’s family hails from the province, which is a stronghold for the president’s Justice and Development Party (AKP). He received 77% of the province’s votes in the 2018 presidential race while the AKP’s candidate in the last local election took 73%.

Although the idea of the mayor of Istanbul holding political rallies so far from the city may seem strange, Imamoglu is a native of neighboring Trabzon province and the end of Ramadan is traditionally a time for people to visit their home towns.

Many Istanbul residents also have Black Sea roots, having migrated westward in the second half of the last century.

Rize has previously proved to be a tough place for opposition politicians to visit. When Iyi Party leader Meral Aksener traveled there a year ago she was verbally abused by locals in ugly scenes. Erdogan later praised Aksener’s tormenters as having given her a “good lesson.”

There was a different welcome for Imamoglu on Tuesday, however, with locals rushing to take selfies with the mayor.

“Istanbul is, of course, a municipality of 16 million, but Istanbul is also Turkey.  At the same time, it is a city formed by people from all over Turkey,” he told a crowd in Rize’s Derepazari district.

Imamoglu highlighted the exodus of young people from the Black Sea region in search of job opportunities.

In a February report, Germany’s Konrad-Adenauer-Stiftung Association showed that 73% of young Turks want to move abroad, with most citing economic factors such as high inflation and unemployment in Turkey.

Ahead of presidential and parliamentary elections due to be held by June 2023, Turkey’s economic crisis is expected to be the main battleground between the opposition Nation Alliance comprised of the CHP, Iyi Party, Saadet Party and Democrat Party and the People’s Alliance of the AKP and the Nationalist Action Party (MHP).

In its April poll of voting intentions in a parliamentary election, MetroPoll showed the Nation Alliance passing the AKP/MHP coalition after undecided, protest and no-answer responses were distributed among the parties.

Two other parties that have been cooperating with the Nation Alliance but are not part of it received 2.6% between them. The Democratic People's Party, which has roots in Turkey’s Kurdish movement, took 12.3% of votes.

Such predictions may well be a cause for concern to the ruling party. In the days leading up to Imamoglu’s Rize trip, the CHP’s provincial chairman Saltuk Deniz said roadside posters advertising the visit had been removed by the state’s General Directorate of Highways.

In the wake of the Gezi protest trial that saw philanthropist Osman Kavala jailed for life and seven others receive 18-year prison terms, the deterioration in rule of law in Turkey has also emerged as a central issue, according to Ertan Aksoy, president of the Social Democrat Foundation and founder of polling firm Aksoy Research.

The prosecution of Kavala and his codefendants for trying to overthrow the government during protests that rocked Turkey in the summer of 2013 was widely discredited for the lack of evidence to support the charges.

Asked whether the judiciary was independent in an Aksoy Research survey, 59.9% of respondents answered negatively and just 15.7% said it was. In a separate question, only 18% of people said they trusted the judiciary.

“Society’s sense of justice and trust in justice are being shaken every passing day,” read an Aksoy article for opposition newspaper Cumhuriyet.

“However, despite everything, our society, the conscience of Turkish society, is very great. For this reason, the court of society’s conscience condemns those who create all these injustices every day.”