President Recep Tayyip Erdogan is employing a panoply of unfathomable methods to peremptorily take over city municipalities he lost in the last election. 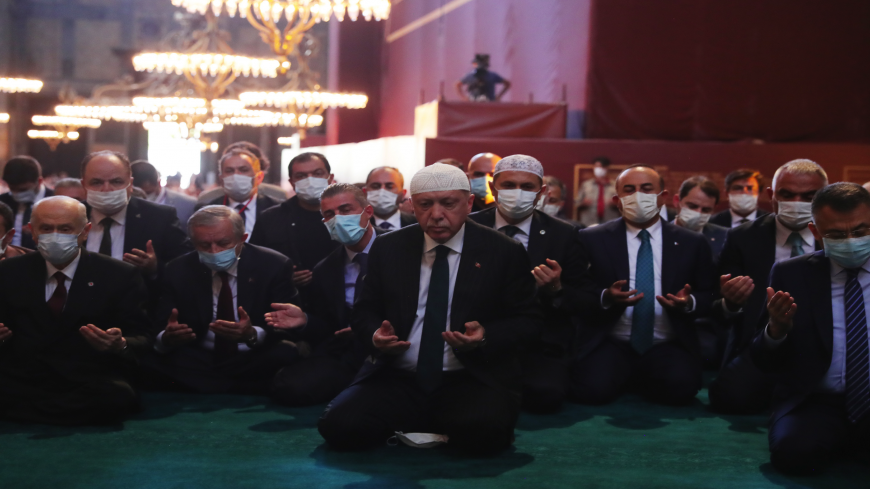 Istanbul's mayoral race was held twice in 2019, and opposition candidate Ekrem Imamoglu won both times. Fast forward from June 27, 2019 — the day Imamoglu, from the main opposition Republican People’s Party (CHP), accepted the position of mayor — to August 2020, when Turkish President Recep Tayyip Erdogan proudly announced the conversion to mosques of both the Hagia Sophia and the Chora Museum.

The Islamization of Istanbul continues as conservative Erdogan supporters enthusiastically cheer for the reconquest of the city with each new mosque announcement. Pro-government media ridicules how the West cannot accept the loss of the Hagia Sophia or Istanbul. As television crews interviewed people waiting to attend Friday prayers on the day of the opening of Hagia Sophia as a mosque, one middle-aged man passionately said, “Today, we took Istanbul back.”

Even before Imamoglu assumed the mayor’s seat, it was an open secret that Erdogan intended to curtail the powers of municipal leaders. But the extent of usurpation having reached this level this quick was unfathomable. Al-Monitor spoke with both Justice and Development Party (AKP) and CHP members of the Istanbul Metropolitan Municipality (IMM).

The AKP holds the majority in the IMM’s city council. It has 39 smaller municipalities, and 24 of those belong to the AKP. The IMM’s budget and revenues are a critical source of income, and the AKP is not willing to let it go. Istanbul accounts for 31% of the national gross domestic product.

Since June 2019, Erdogan has either generated decrees to return the metropolitan municipalities' powers to the ministries, or the AKP-led IMM city council has managed to take over the decision-making power. The IMM has not been the only target, as Ankara has even questioned mayors who tried to distribute free bread in the first days of the COVID-19 pandemic.

Max Erdemandi, a researcher at the University of Maryland, told Al-Monitor, “For Erdogan, making the 2019 local elections a referendum on his legacy was a huge mistake. He is now caught in a spiral of bad decisions that not only creates many obstacles that prevent Imamoglu from implementing effective governance but further tarnishes Erdogan’s image as well.”

IMM media relations coordinator Sukru Kucuksahin told Al-Monitor that “Imamoglu is still awaiting an appointment to meet with the president.”

However, Ankara seems determined to block Imamoglu from reaching any of his goals. For example, Imamoglu has expressed he is adamantly against Erdogan’s mega project Canal Istanbul, an artificial waterway that would link the Black Sea with the Sea of Marmara to bypass the vulnerable Bosporus Strait. Imamoglu explained the potential dangers of the project based on scientific data on earthquake safety, economic burden and ecological threats. On Aug. 19, the IMM posted signs all around the city with the slogan that the choice was between “Istanbul or the Canal.” Police took down all the billboards after midnight. This sort of action by the police would normally require a court order.

The results of the government’s power grabs concerning municipal matters became evident. On Aug. 12, Turkey was shocked to see workers drilling the stone walls of 14th-century Galata Tower, as IMM bureaucrats tried to stop the renovation. Back in May, after months of legal battles, iconic Galata Tower’s property rights were transferred to the Ministry of Culture and Tourism. A similar process has been followed for different historic sites; for example, the Chora Monastery’s museum status was abolished in November 2019, and it was transferred to the Religious Affairs Directorate in July 2020.

The IMM also tried to preserve two historic icons of the city: the Sirkeci and the Haydarpasa train stations. There was a tender under the state railways to rent the idle storage facilities, but with rather scabious justifications, the IMM’s bid was eliminated. Instead, a former employee of the IMM, Huseyin Avni Onder, won the bid. Onder is the former chairman of the Archers Foundation (Okcular Vakfi). Erdogan’s younger son, Bilal Erdogan, serves on the board. The foundation received millions of dollars of financial support from the IMM before Imamoglu’s electoral victory.

In November 2019, the IMM’s AKP-majority city council decided to transfer the metropolitan municipalities’ lands, along with buildings and businesses on those lands, to the smaller municipalities where the AKP had won.

"The IMM’s revenues declined during the pandemic. So Imamoglu sought permission to borrow 4.2 billion liras ($575 million) for the city, but only 648 million liras ($89 million) was granted by the AKP-led IMM city council,” said Kucuksahin.

A member of the IMM city council speaking on the condition of anonymity said this money was allowed so that AKP-friendly contractors could be paid for the debt accrued before Imamoglu became mayor.

In July 2020, 565 million liras ($76.5 million) reserved in a bank account for the construction of a new metro was confiscated to pay for the debts accumulated during the AKP era. These are only a few of the unprecedented punitive actions taken against the IMM. The central government's power grab aims to thwart Imamoglu’s reelection prospects and restore a significant amount of income for the AKP's decades-long clientelism.

The opposition has won the electoral battle, but can they win the war against the central government? Indeed, some neighborhoods set the example of what the IMM is up against after all. The Beyoglu district is home to Istiklal Avenue, which used to be one of the most popular spots for tourists and gatherings. This is where Gezi Park protests originated as well as several other historic marches. The AKP delivered on its promise to “clean” Beyoglu. Shopkeepers became the perfunctory vigilantes against protesters.

Now, Kadikoy is going through a similar transformation. In July, the shopkeepers attacked a group of youth activists who were commemorating the victims of a terrorist attack. A real estate agent who has been in Kadikoy for two decades told Al-Monitor there was increased pressure on real estate agents and building owners to rent spaces to the “native and national” people, meaning pro-government people. “Then there is pressure on the existing shopkeepers to hire pro-government people. Financial inspectors keep writing fines and left-leaning shopkeepers leave the district,” he added.

Last year’s electoral victories and Erdogan’s decreasing approval ratings in the polls give the opposition enthusiasm. Erdogan was able to use the IMM’s mayoral post as a stepping stone to power. Replicating his model to success no longer seems possible.

The AKP removed most mayors and council members from the pro-Kurdish Peoples’ Democratic Party in Kurdish cities. In the West, their titles remain intact. But their municipal power is decimated, and they cannot even hang posters on their own billboards. Just like Kurdish signs are removed regularly, so are the Turkish ones if the AKP doesn’t approve.

These repeated injuries are taken to the courts, only to confirm who really holds absolute political power. Ballot box victories may no longer be sufficient to challenge Erdogan’s imperial powers.