Prime Minister Recep Tayyip Erdogan will mark 20 years in politics with the March 30 local elections while under criminal investigation. 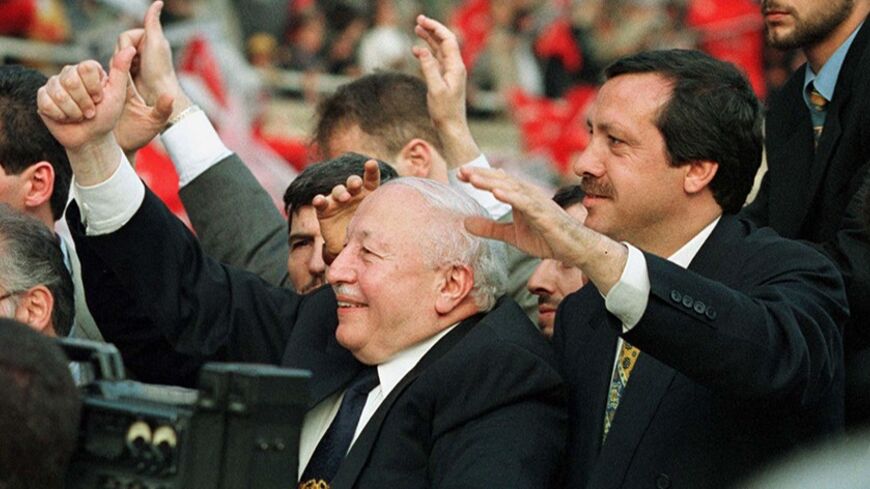 Necmettin Erbakan, then the Turkish prime minister, is flanked on his left by then Istanbul Mayor Recep Tayyip Erdogan as they give thumbs-up to the cheering crowd in Istanbul's Inonu Stadium to celebrate the anniversary of the Ottoman conquest of Istanbul, May 30, 1997. - REUTERS

To understand the critical developments occurring in Turkey today, it's crucial to consider the past. Turkish Prime Minister Recep Tayyip Erdogan will mark 20 years in politics with the coming local elections on March 30. When the Islamist Welfare Party (RP) scored a historic success on March 27, 1994 topping the polls in 28 provinces including in the capital Ankara, Erdogan was elected for the first time into office as the mayor of Istanbul.

The RP promised to close down dozens of unlicensed bars and restaurants serving alcohol that had operated with impunity for years in Beyoglu, on the European side. As the new mayor, Erdogan also announced plans for a large mosque and Islamic study center in Taksim Square as part of what he called the “cultural cleansing” of Beyoglu.

That 1994 plan is quite similar to his project of building an Ottoman Artillery Barracks and a mosque at Taksim Square, which triggered massive protests in late May and early June 2013. And there's continued talk about further restricting alcohol licenses for restaurants and bars in Beyoglu. In fact, there is nothing new in what Erdogan says or does today — except that he's now trying to survive a massive criminal investigation bringing him and his family directly in the spotlight of a corruption and bribery scandal.

Including the 1994 election campaign promises, Erdogan has been talking about forming a “just order.” His concept of political Islam considers secularism — or, in his own words, "the old Turkey" — to be a Western-style governance that deprives people of their religion and Allah. Interestingly, however, he's blaming US-based Sunni Islamic cleric Fethullah Gulen and his followers, the Gulenists, of preventing him to build such a just and moral order.

Since the graft probe surfaced about three months ago, Erdogan has been accusing the Gulenists of establishing a “parallel state,” taking over the key state institutions such as the judiciary and the security establishment and being used by the United States and Israel as pawns to bring his government down. He claims that all the allegations as well as the leaked audio recordings between him and his son revealing his guilt are all a work of fiction and an “immoral montage.” He has been in fact pointing at Israel or the “interest rate lobby” for engaging in activities to destabilize Turkey and therefore provoking the Gezi Park protests. The New York Times published on Sept. 1, 1980 — just days before the country’s last military coup — the following: “… [Turkey’s] Jews were 'very unhappy' about the recent declarations by Mr. Erbakan, who blamed world Zionism for the political violence in Turkey and charged that 'Zionist centers' were secretly providing money and weapons to both leftist and rightist terrorists in Turkey.”

People tend to forget that Erdogan is a student of Necmettin Erbakan, Turkey's first Islamist prime minister (1996-97) who died in 2011. What's new is that Erdogan is coming under corruption allegations casting doubt over his moral standards as he continues to distrust the judiciary of his own making.

In essence, for the opposition the question is whether they will be able to win control of the Istanbul and Ankara municipalities after two decades in the local elections. Kemal Kilicdaroglu, leader of the main opposition Republican People’s Party (CHP), said in Kirklareli on March 3: “Let me tell you the story of a man who entered politics with a hole in his shoe, and now became one of the wealthiest prime ministers of the world. An operation took place on Dec. 17. It was named the operation against corruption and bribery. This operation revealed the biggest corruption and bribery network of this republic. We listened to the audio recording of a conversation between the prime minister and his son. … I am calling on our police brothers. You are the people’s police. You can’t be the police of a thief. The police fights against corruption, fights against injustice.” Stressing the authenticity of the audio recording, Kilicdaroglu added, “Act with your conscience. You elected this man as the prime minister. All right, we respect democracy. I don’t say a word against your votes. It is your legitimate right, but do not continue to partner with those who acquire wealth illegally. Because the one you elected first robbed you.”

Devlet Bahceli, leader of the opposition Nationalist Action Party (MHP), also said on March 3: “There is no reason for Recep Tayyip Erdogan to talk about conspiracies alleging that some are jealous of him, and trying to make a judicial coup to bring him down. There is no reason for him to fear. It is one of the important duties of the prime minister to fight against corruption and bribery. You can’t give up on that, hide it or cover it up. The only thing that the Justice and Development Party (AKP) should do now is to allow the investigation to go as deep as it goes.” Stressing that reassigning thousands and thousands of state bureaucrats or rushing to change laws is no solution for acquitting Erdogan from the allegations of this criminal investigation, Bahceli added, “Those who leaned toward dictatorship and got engaged in corruption always had a disastrous ending. There are so many examples like those happened in Tunisia, Egypt, Syria, Libya or Indonesia. If these corruption allegations are not cleared, people will get more awakened. If those who engaged in corruption cannot be put before a judge, the people will then get divided between those who steal the state’s wealth and those who don’t.”

While some of the latest public opinion polls such as the one by the Sonar Research Center show the AKP losing at least 8% of its votes in the local elections, others suggest that it is still winning Istanbul and Ankara.

The people will decide on March 30, but there is one observation that needs to be made today. Yes, people are governed by those who mirror them. But it's the politicians’ job to improve society. When the AKP was first elected to office in November 2002, people were fed up facing economic challenges and corrupt politicians. The Islamists have filled the void, and started building from the local governances a strong network of social support teams helping people get jobs and providing them with free assistance. It's easy to blame or look down on those people who vote for the ruling party.

The question is: If it were not for the Dec. 17 operation, could the opposition really win the elections? Let’s be frank. They could not, as they continue to fail challenging Erdogan with their own projects. The opposition only knows to criticize the ruling party. That's why Turkey is writing a very sad chapter in its history — at least for the beginning of the 21st century.