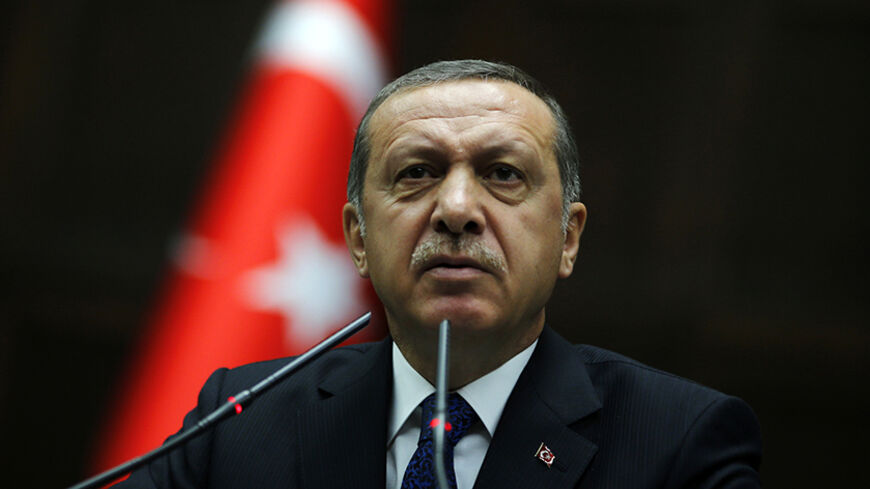 Turkey's Prime Minister Recep Tayyip Erdogan addresses members of parliament from his ruling Justice and Development Party (AKP) during a meeting at the Turkish parliament in Ankara, June 3, 2014. - REUTERS/Umit Bektas

Ankara is at an impasse as a result of the ruling Justice and Development Party (AKP) and opposition parties’ firm, unbridgeable politics of social division. The government presents itself as being certain that it is totally right on all things considered, and that the opposition is totally wrong.

Turkish Prime Minister Recep Tayyip Erdogan even accuses the opposition of engaging with “terrorist organizations.” The Nationalist Action Party “MHP acted together with the terrorist organizations in the 2010 [local election] and got hugely defeated,” the prime minister said on June 3 at his party’s regular parliamentary group meeting.

Referring to Gezi Park at Istanbul’s Taksim Square, which was at the center of mass demonstrations in 2013, and the graft probe that hit the surface about six months ago bringing his government under the judicial spotlight, Erdogan asserted once again that the US-based Sunni cleric Fethullah Gulen had played a direct role as a pawn of foreign powers in all these events and that the main opposition Republican People’s Party (CHP) is being used.

“Starting with the CHP, the business world, employees and organizations, those who invested their hope in chaos played a crucial role in the [Gezi Park protests]. But people have seen the motive behind these protests.” He said, “On March 30 (the day of local elections), people gave a big lesson to the treasonous front of Pennsylvania [where Gulen is based] and the CHP.”

Erdogan’s arguments, which paint the opposition as being the equivalent of terror organizations or as flirting with foreign powers that aim to bring down a Turkish government, however, defy common sense.

After all, the opposition also wants to be elected to power and serve this country. So, isn’t the government out of line to frame the public debate as showing the opposition as being no different than the enemy? For instance, could the CHP’s objection to the government’s Syria policy really be about hurting the country’s national security interests? Could it ever be possible that these opposition parties desire to see the economy mismanaged?

No, say lawmakers and academicians.

MHP leader Devlet Bahceli argued June 3 at his party’s parliamentary group meeting that Erdogan is acting in such an explosive way and expressing such unfounded accusations because he is seeing people gradually move away from the AKP.

“The prime minister’s talk of a lack of an opposition in the country is political discourtesy in the least, and his advice that the country needs a new opposition is a sign of his panic and stress,” Bahceli said. “I would like to boldly underline that Turkey does not have an opposition problem, but that its government is worn out. …The prime minister and his government have spent all the capital given to them, misused their authority and are nearing the end of their era in power.”

CHP leader Kemal Kilicdaroglu echoed the same concerns during his June 3 parliamentary group meeting. Focusing on Erdogan’s claims that the Gezi protesters drank alcohol in a mosque and disrespected Islam, and that they beat a young head-covered mother with a 6-month-old baby, Kilicdaroglu said these accusations have been proven to be false by public surveillance cameras. “I wonder what would have happened if people had taken to the streets and started a civil war based on these unfounded accusations.” Kilicdaroglu pointed to how sensitive the subject of religion is for the Turkish people. Kilicdaroglu then showed the pictures of a woman named Havva from Rize, Ikizdere, a small town on the Black Sea Coast. “She is an Anatolian woman with her head covered. But because she protested against the government’s plan to build a power plant near her village that would certainly threaten the environment and their water resources, she was beaten by the security officers.”

Kilicdaroglu wondered why Erdogan is not bothered by this head-covered woman’s experience and emphasized that the AKP establishment and the opposition face a wide partisan divide. While opposition parties have given Erdogan the benefit of the doubt in the sense that people can change over the years, and have not held him responsible for what he said or did before coming into power, the prime minister insists that the opposition is doomed to repeat, and never learn from, the partisan mistakes he claims it is making. A self-segregation into conservative and liberal enclaves therefore is shrinking the political middle that once made compromise possible and the parties more ideologically diverse.

Professor Yasemin Inceoglu of the communications department at Galatasaray University wonders whether the country’s politics is doomed to a vicious cycle where freedom of speech becomes the first casualty of politicians' ambitions. “While it would have been expected that the state intervene in favor of the people when someone tries to restrict their right to freedom of speech, just the opposite is now happening in the country,” she told Al-Monitor. “The government accuses anyone with a dissenting opinion or critical mind — be they from the opposition, the media or just a plain civilian citizen — as being engaged in “treason,” favoring a “coup,” being a “capulcu” (Turkish for pillaging and looting louts) or being part of the “parallel state.” This causes people, willingly or not, to self-censor, with the people’s right to be informed the victim.”

Indeed, on June 3 Erdogan blamed Ivan Watson, CNN International’s Istanbul correspondent, who was briefly detained while covering the events at Taksim Square on the Gezi Park protests first anniversary, of being a “flunky” and “a foreign agent.”

The result is that Erdogan is provoking people’s ancient fears that foreigners are trying to carve up Turkish territory while putting down Turks' rights to full economic and political accomplishments. Rightly or not, the majority may be prone to believe this, suspecting that outside powers might be up to something. The AKP therefore easily benefits from this societal weakness, with people wondering whether the opposition really might be engaging with those foreign powers against the country’s interests.

The current Turkish parliament is the most polarized in the history of this country, which is a reflection of the divide between the people, as well. In the words of Bahceli, people are giving warning signs of disengaging from each other, both spiritually and emotionally. People’s bond of trust with each other is fading away; politicians' lack of cooperation under the parliament’s roof bears the ultimate responsibility.

Parliament’s increasingly clear-cut partisan divisions reflect a mobile society in which liberals tend to congregate mostly in the coastal cities, and feel isolated or ignored in other cities where the AKP holds power. People are becoming more consistently partisan in their voting. The AKP base especially considers its support to Erdogan as its right to worship. “The majority of the conservative base did not consider the people’s reaction at Gezi as solely targeting Erdogan,” Galip Dalay, a researcher at the Foundation for Political, Economic, and Social Research (SETA), wrote on June 1 on Al Jazeera Turk. “On the contrary, they perceived this as a reaction to the transformation of the country during the past decade giving representation to the conservative/Islamic identity of the people. That is, people [AKP backers] perceived this as a rejection of their cultural and political conventions as well as their economic mobilization.”

It is in this political atmosphere that Turks will head to the polls in August to elect their president for the first time by public vote. No politicians have yet officially announced their candidacy for the election, which will determine whether the country will be able to strike a balance between its liberal and conservative nature. In firmly liberal or conservative areas, the result of the presidential election therefore promises to cause social discomfort like never before in this country.

And with this trend, Bahceli said, “Turkey is quickly moving to becoming an unmanageable country” where people lose the sense of peace with each other.