Turkish opposition leader Kemal Kilicdaroglu was attacked at the funeral of a slain Turkish soldier, but Turkey's president was slow to offer condolences. 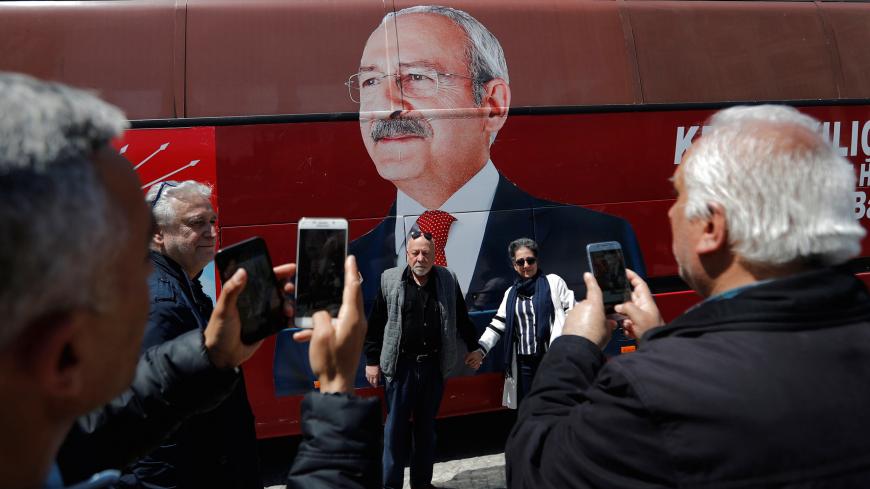 Supporters of the main opposition Republican People's Party (CHP) pose in front of a party bus with a picture of their leader Kemal Kilicdaroglu on it, in Istanbul, Turkey, April 22, 2019. - REUTERS/Murad Sezer

ANKARA, Turkey — The assault on Turkey’s opposition leader Kemal Kilicdaroglu has shocked the country. A man with the common touch, Kilicdaroglu won a place in many people’s hearts when he led a protest march from Ankara to Istanbul. But on Sunday, he was nearly lynched by ultra-nationalists at the funeral of a slain soldier.

“Vile attack,” headlined Sozcu newspaper, above a photograph that covered half of the front page. It showed the assailant punching Kilicdaroglu in the jaw so hard that his face contorted.

But the polarization that spawned the attack, the division of Turkey into two political camps, carried through to the reaction. Not everybody condemned the 59-year-old lorry driver, Osman Sarigun, who landed the punch.

Kilicdaroglu had gone to a mosque in the village of Cubuk, north of Ankara, for the funeral of a soldier killed by the Kurdistan Workers Party (PKK) near the Iraqi border. As the crowd became aware of Kilicdaroglu’s presence, it began to chant “PKK out!”

The accusation stemmed from President Recep Tayyip Erdogan’s charge that the pro-Kurdish People’s Democratic Party (HDP) is the political wing of the PKK — a claim the HDP denies — and that Kilicdaroglu’s Republican People’s Party (CHP) “collaborates with terrorism” because it benefited from the HDP’s withdrawal of candidates from the mayoral elections in western Turkey. The withdrawal enabled the CHP to win control of Istanbul and Ankara on March 31.

Very quickly the chanting against Kilicdaroglu turned to pushing and shoving. The police and Kilicdaroglu’s bodyguards struggled to keep the mob at bay. Sarigun managed to penetrate the ring of guards and socked Kilicdaroglu with his left fist. The leader was ushered into a house, which the crowd pelted with stones. A woman was heard shouting repeatedly: “Come on, somebody burn this house!”

The police defended the house. Defense Minister Hulusi Akar grabbed a police car’s microphone and urged the crowd to disperse, saying, “Esteemed friends, you have given your message and demonstrated your reaction.”

Akar called for reinforcements. A convoy of armored vehicles arrived. Amid loud boos, guards escorted Kilicdaroglu into an armored personnel carrier, which drove him away.

The news of the assault spread swiftly. When Kilicdaroglu arrived at his party headquarters in Ankara, a crowd of at least 800 people greeted him.

“There were signs that this was coming,” Durmush Cengiz, a professional gardener, told Al-Monitor. “[Interior Minister Suleyman] Soylu gave a speech suggesting that Kilicdaroglu should be stopped from attending funerals of martyrs.”

“I think this was deliberately done by the government,” Cengiz continued. “They don’t want to accept the success of the CHP [in the elections]. They blame us for the terrorist attack as they always associate us with terrorists.”

A company manager standing outside the CHP headquarters pointed to where such political violence could end. “There was an election and CHP won the big cities,” said Deniz, who declined to give her surname. “This is the reaction of the government. It attempts to turn its election loss into civil war.”

Kilicdaroglu told the crowd “No attack can intimidate us.” He recalled the PKK had tried to kill him when it attacked his convoy in northeastern Turkey in 2016.

“I want to tell the assailants that I am a father of a Mehmetcik as well,” he said, using the endearing term for a Turkish soldier. “I’m not like them,” he added in an apparent reference to Erdogan and Cabinet ministers, who got their sons excused from military service — legally — by paying a sum of money to state coffers.

“Do you know why they made this attack?” Kilicdaroglu asked the crowd rhetorically. “Because … for the first time, people with very different political views came together for the unity and integrity of the country. That’s why they felt uncomfortable.”

He was referring to the fact that the CHP, a nominally social democrat party, won Istanbul and Ankara in alliance with the Good Party (Iyi), a moderate nationalist party, and with the support of the Kurds, who would normally have voted HDP.

From the government’s side, Erdogan’s spokesman Ibrahim Kalin was the first to react.

“I condemn this shameful attack against Kilicdaroglu and I send him my get-well-soon wishes,” Kalin said Sunday. “Violence is not a democratic way of claiming one’s rights and protesting.”

But Erdogan was slow to respond. When the Kurdish politician Ahmet Turk was assaulted by a fanatic in 2010, within hours Erdogan, then prime minister, phoned Turk and expressed his sympathies.

However, Erdogan did not call Kilicdaroglu. Instead, at 2:11 p.m. on Monday, nearly 24 hours to the minute after the assault, Erdogan issued a tweet.

“Yesterday we buried four of our martyrs. May God have mercy on them. Unfortunately, an unwelcome incident occurred at the funeral of a martyr in Cubuk. The protest against CHP leader Kilicdaroglu turned violent,” Erdogan wrote. “The incident is being investigated in detail. We can never approve of violence.”

A harsher response came from Devlet Bahceli, the leader of the hard-right Nationalist Movement Party (MHP), which fought the elections in alliance with Erdogan’s Justice and Development Party (AKP).

“What did you do to that man to make him punch you?” Bahceli asked Kilicdaroglu, suggesting the CHP leader was responsible for what happened. “I think Kilicdaroglu needs to go on holiday,” he added.

The police arrested nine suspects, including Sarigun and the woman who called for the house to be burned down. Interior Minister Soylu said there was no evidence of an organization being behind the attack.

“The CHP should have informed us of Kilicdaroglu’s plans to attend the funeral," Soylu told the press.

“The CHP’s contact with the HDP has been carried out in front of the public,” Soylu continued. “Everybody has to take a stand against the PKK. Ambivalent attitudes are recorded by our people. … No one should try to make us forget the partnership between CHP and HDP, which is the political arm of the PKK.”

In fact, there is no evidence of a “CHP-HDP partnership.” Neither the government nor the pro-government media have ever published recordings of phone calls between the CHP and HDP leaders or photographs of secret meetings between them and the like.

What happened is the HDP realized it had no chance of winning the mayoral posts of western Turkey, but it had a strong interest in seeing Erdogan’s AKP being ousted from the town halls of those cities. So it decided not to run in Istanbul, Ankara, etc., and its imprisoned former leader, Selahattin Demirtas, urged the Kurds in those towns to “vote No to fascism.”

For its part, the CHP denied any collusion with the HDP, saying the Kurdish party made its decision by itself.

Hikmet Sami Turk, who served as justice minister in the government before Erdogan came to power, told Al-Monitor the basic cause of the assault was the invective of the AKP-MHP alliance.

“The allegations by the MHP leader [Bahceli] and the heavy criticisms of President Erdogan, who accused Kilicdaroglu of taking orders from the HDP, affected some people and led them to attack Kilicdaroglu,” Turk said.

Rights lawyer Gunal Kursun agreed, telling Al-Monitor that the comments of Erdogan and Interior Minister Soylu had played “a leading role in the lynch atmosphere” that pursues Kilicdaroglu.

“Whenever the president or other political leaders of the AKP say something, it's understood 10 times stronger by their followers.”

Kursun, an executive of the Human Rights Agenda Association, said the branding of one’s political opponents as “terrorists” is illegal because there is an article in the penal code that prohibits the promotion of enmity among citizens. “But this article has never been applied to AKP politicians up to today.”

“I don’t think it is realistic to expect [the AKP leaders] to change their language,” he added, “but this is what we need at this point.”