Erdogan lashes out at opposition for questioning his take on who was behind the 2013 Gezi protests; various political parties discuss deals for March 2019 local elections. 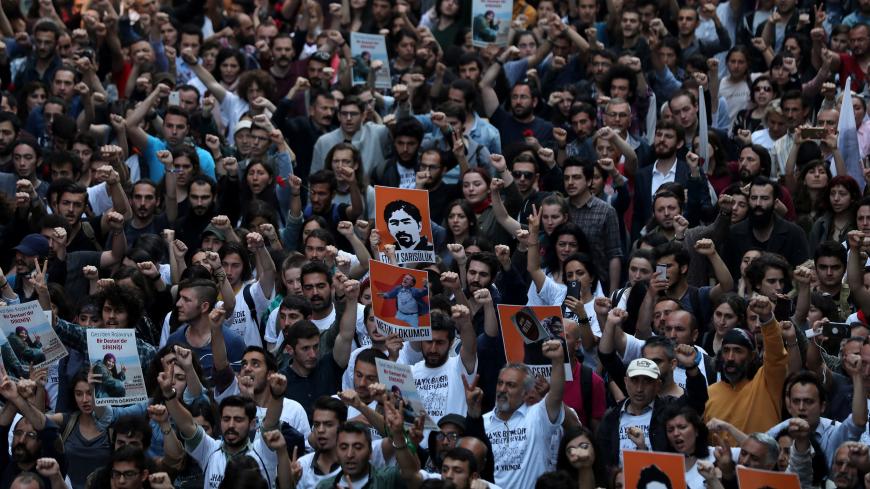 People gather to mark the fourth anniversary of the Gezi Park protests in central Istanbul, Turkey, May 31, 2017. - REUTERS/Huseyin Aldemir

ANKARA, Turkey — President Recep Tayyip Erdogan lashed out at the opposition Wednesday for condemning his arrest of 14 academics in what was seen as a crackdown on liberal civil society, in particular the group run by the respected businessman-philanthropist Osman Kavala.

Without naming Kavala, Erdogan accused him of financing the Gezi Park protests of 2013, and added: “Who is behind him? The famous Hungarian Jew George Soros.”

The leader of the main opposition Republican People’s Party (CHP), Kemal Kilicdaroglu, had attacked the government for its predawn detention of 14 academics who allegedly had ties to Anadolu Kultur (Anatolian Culture), a nonprofit organization founded by Kavala that uses cultural and artistic exchanges to promote harmony among Turkey’s ethnic and religious groups.

Kilicdaroglu said the aim of the arrests was to find evidence against Kavala, who has been in detention for 13 months without any charge being filed.

Kılıçdaroglu told his party legislators, “There is no justice in a country where first you put innocent people in jail and then you ask ‘Where is the evidence?’”

He said, “They are trying to take revenge for the Gezi events,” referring to the demonstrations of May and June 2013 that constituted the biggest challenge to Erdogan’s rule. As many as 30,000 people marched through Istanbul chanting for Erdogan’s resignation.

Erdogan accused Kilicdaroglu of talking “some nonsense that praised the Gezi Park protests” and accused the protesters of being terrorists.

"The person who financed the terrorists during the Gezi incidents is currently in prison,” Erdogan said in a reference to Kavala. “And who is behind him? The famous Hungarian Jew George Soros. This is a man who was assigned to divide nations and shatter them. He has so much money and he is spending it in these ways."

Yasemin Acar, an assistant professor of political psychology at Ozyegin University in Istanbul, told Al-Monitor that the president appeared to fear a new eruption of popular protest.

“Right now we’re in a condition that is very ripe for collection action,” Acar said. She referred to the state of the economy and opposition to Erdogan’s policies.

Earlier this month Moody’s rating agency said the Turkish economy had “likely entered recession” and would contract by 2% next year. The respected polling company Metropoll has found that while 40% of people say Erdogan is doing his job well, 46% do not approve.

In his speech, Erdogan said, “Those who support Gezi, secretly or openly, also support the PKK and FETO.” The PKK is the outlawed Kurdistan Workers Party, and FETO is a pejorative term Turkish officials use to describe followers of Fetullah Gulen, the Islamic cleric blamed for the coup attempt of 2016.

Acar saw the comment as an attempt to discredit anybody who would contemplate taking part in mass protests again.

“There is tension that is building, and in order to prevent that tension from reaching anything, you have to cut it off at the knees,” Acar said. “You have to reframe it so it’s no longer a peaceful opposition, and the way to do that is to associate it with the PKK and FETO.”

But there was something else about Erdogan’s harking back to the Gezi Park protests, which began as a small protest against the uprooting of trees in a much-loved park to build a shopping center. On Wednesday, the president repeated a claim he made back in 2013: “There is no government in Turkish history that has planted more trees than we did.”

It seemed odd that Erdogan, who has won two presidential elections and a referendum since Gezi, has a need to return to the minutiae of events that are more than five years old.

“It’s something that has stuck with him,” Acar said.

On Thursday, Turkish Foreign Minister Mevlut Cavusoglu holds talks with the EU’s foreign policy chief, Federica Mogherini, and the commissioner responsible for EU enlargement, Johannes Hahn, in Ankara. It will be the first such encounter for 18 months as Turkey’s bid to join the EU had almost ground to a halt. Hahn has proposed that Turkey abandon its quest for full membership in favor of a special relationship with Europe, but his view is not shared by the EU executive.

Thursday’s agenda will include the detention of the academics, almost all of whom have been released, an EU official told the Hurriyet Daily News.

Acar said the detention of the academics had sent a frisson of fear through Istanbul’s universities. “Some of the people arrested were not very politically active; they were not very well-known. There was a sense of randomness (about) who could be targeted.”

Kavala has worked with the Open Society Foundation, the network founded by Soros that gives money to civil society groups around the world. Open Society has a branch in Turkey. And it seems that Erdogan used that connection to launch his attack on Kavala and Soros.

Later Wednesday, Erdogan met the leader of the right-wing Nationalist Movement Party (MHP), Devlet Bahceli, to discuss the possibility of forging an alliance for the local elections in March 2019.

Last month Bahceli had ruled out continuing the alliance that the parties forged for last year’s referendum and maintained through the presidential and legislative elections of June. He was disappointed that Erdogan had rebuffed his call for granting amnesty to a number of criminals, including well-known gangsters.

But pessimistic forecasts appear to have brought the two right-of-center leaders together. Columnist Deniz Zeyrek of the Sozcu newspaper said Erdogan had invited Bahceli to his palace in Ankara because surveys by the ruling Justice and Development Party (AKP) found that it could lose the two biggest cities in the country, Istanbul and Ankara, to the opposition.

The Erdogan-Bahceli talks ended without such an agreement, but AKP spokesman Omer Celik said the two leaders would continue to negotiate.

Meanwhile, legislators of the opposition Iyi Party and the CHP met Wednesday to continue negotiations toward an electoral alliance.