How Soros turned from friend to foe for Erdogan

The Open Society Foundation is pulling out from Turkey amid a vitriolic campaign demonizing its sponsor, George Soros, as a backer of forces that seek to unseat President Recep Tayyip Erdogan. 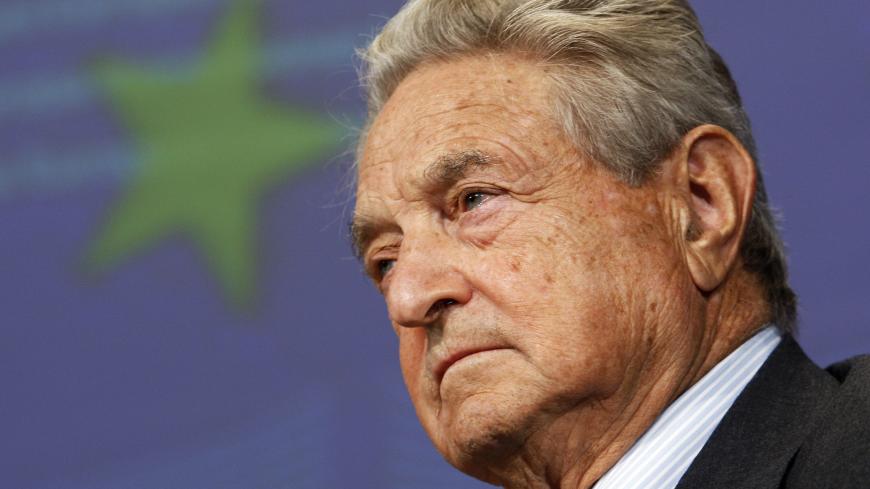 A government-led campaign demonizing American-Hungarian billionaire and philanthropist George Soros has reached such a crescendo in Turkey that the Open Society Foundation has decided to pull out from the country.

Soros who in recent years has been turned into a hated figure in countries such as Macedonia, Poland, Romania and even his native Hungary, is now being used as a tool to intimidate the opposition in Turkey. The most striking reflections of this campaign are the judicial onslaughts targeting Turkish civic society leader Osman Kavala and the Open Society Foundation in Turkey, which Kavala had co-founded.

The left-leaning Kavala, imprisoned for more than a year without an indictment, has often been labeled “the red Soros” by President Recep Tayyip Erdogan. In a Nov. 21 speech, Erdogan again drew a link between the two, accusing them of sponsoring the mass anti-government demonstrations in Turkey in 2013, which started at Gezi Park in Istanbul. “A person who was the funding source of the terrorists during the Gezi incidents is currently in prison. Behind him is the famous Hungarian Jew, Soros,” he said.

Yet Erdogan was on good terms with Soros until several years ago. The first meeting between the two took place in January 2003, shortly after Erdogan’s Justice and Development Party came to power. Accompanied by two senior aides, Erdogan looked happy at the meeting on the sidelines of the World Economic Forum in Davos, Switzerland. For Erdogan at the time, rubbing shoulders with influential figures such as Soros was like a key that opened doors for him in the United States and the European Union (EU).

During the Davos meeting, Erdogan told Soros, “We are the open society of Turkey. You should support us,” according to Ahmet Sever, an ex-adviser to former President Abdullah Gul, who was Erdogan’s right-hand man at the time.

Soros did not remain irresponsive. An initiative led by the Open Society Foundation resulted in the creation of a group called the Independent Turkey Commission to promote the inauguration of membership talks between Turkey and the EU. Commission members — among them renowned figures such as former Finnish President Martti Ahtisaari, former French Premier Michel Rocard, former foreign ministers Hans van den Broek of the Netherlands and Emma Bonino of Italy — shuttled between European capitals, lobbying on Turkey’s behalf.

In June 2005, Soros met with Erdogan and his aides during an eight-day visit to Turkey. Erdogan’s daughter Sumeyye, meanwhile, did an internship at the Turkish Economic and Social Studies Foundation TESEV, which received funds from Soros.

In short, Erdogan had no problem with Soros until the 2013 Gezi Park protests. Rather, it was Turkey’s neo-nationalists and Euroasianists who tended to see Soros’ hand behind every evil and argued that Erdogan was a Western-backed “political project.”

The Open Society Foundation — preceded by the Open Society Institute from 2001 to 2008 — faced no legal obstacles in sponsoring projects by various Turkish associations, foundations and universities. Under Turkish law, the Directorate General of Foundations inspected its activities.

Moreover, the Open Society Foundation was seen as pro-Erdogan in those years. Its former chair Can Paker says his resignation in 2011 was precipitated by an admonition from Aryeh Neier — the then-president of Soros’ philanthropy network — for being too pro-government.

But when Ankara began to backpedal from reform and its EU accession talks faltered, initiatives on topics such as democratic values, freedoms and minority rights that Soros funded became a risky business. In the wake of the Gezi Park protests, campaigns vilifying civic society groups accelerated, with groups linked to the Open Society Foundation bearing the brunt. Soros became persona non grata, and his request for an appointment with Erdogan after the Nov. 1, 2015, elections was reportedly rejected.

It was hardly a surprise that the probe against Kavala — based on charges he sought to spread the Gezi Park protests across Turkey, create chaos and unrest, and topple the government through violence — extended to the Open Society Foundation. On Nov. 18, 13 people were detained as part of the probe, among them Ali Hakan Altinay, director of the Open Society Foundation in Turkey. All but one of the detainees were later released on parole. Commenting on the detentions, Erdogan said, “A person who financed the Gezi incidents is in prison. And who is behind him? Soros. A man who divides nations and has an abundance of money and spends his money for that purpose.”

On Nov. 26, the Open Society Foundation announced its decision to end its activities and legal personality in Turkey on the grounds that “the intensification of false allegations and unmeasured speculation in the media made the continuation of activities impossible.”

The Open Society Foundation, which has built an extensive network in dozens of countries since 1984, spent 11.6 million Turkish liras ($2.2 million) on various projects in Turkey from 2009 to 2013, according to its own figures. Some of those projects belonged to public institutions. Its recent work included efforts in support of Syrian refugees.

According to Turkey’s Financial Crimes Investigation Board, some $13.5 million were transferred to the Open Society Foundation in Turkey from a sister organization in the 2011-2017 period. The government-controlled Sabah daily described that money as funds “transferred by the speculator George Soros to the foundation [co-founded by] Osman Kavala, the Gezi sponsor.”

Another pro-government daily, Yeni Akit, wrote, “Soros subsidizes coups and coup plotters. Soros, who serves the interests of Zionist Israel and the big Satan, the United States, infiltrates countries via institutions that he puts on the stage under various names, with the Open Society Foundation being the leading one.”

Such narratives resonate easily on Turkey’s political scene, which is increasingly pervaded by extreme nationalist rhetoric. By calling Soros a “Hungarian Jew” while commenting on his alleged criminal links to Kavala, Erdogan has taken the issue to a dangerous point. The “Jew” label is one of the most effective ways of wasting people. Yet Erdogan’s strategy is in tandem with global trends nourishing the far right and meshes with anti-Soros messages by US President Donald Trump. Last month, Trump claimed that Soros paid people who were protesting Judge Brett Kavanaugh’s nomination to the Supreme Court. Erdogan seems to be telling Trump that they both have the same problem and should understand each other.

As international relations scholar Ilhan Uzgel writes, “Erdogan has no problem with Soros; otherwise, he would have not met and posed with him for pictures in the early 2000s. By emphasizing the Soros link, he is showing Trump and other centers across the world where he stands in the transformation of the global system, while at the same time reminding us what the price of silencing and intimidating oppositionists could be.”