Why Turkey’s elections may not matter

Today’s election may have less of an effect in Turkey than many think, as electoral upsets have been relatively rare and their consequences limited. 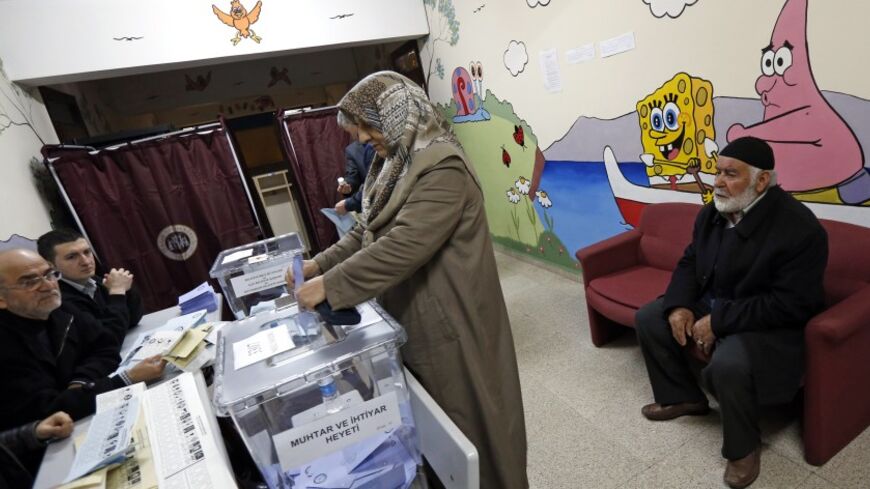 A woman casts her ballot inside a polling station during municipal elections in Istanbul, March 30, 2014. - REUTERS/Murad Sezer

Today, March 30, 52 million Turks cast their votes in local elections. Although the vote won’t affect the parliamentary majority of Turkey’s ruling Justice and Development Party (AKP), the elections are perceived to be a popularity contest for Prime Minister Recep Tayyip Erdogan, who is mired in a major corruption scandal. Social media users have reported that they have never seen such long lines at polling stations. It is expected that these elections will witness the highest participation rates in any election in Turkish history. It seems like Turkey has an opportunity for change.

Some observers, including Al-Monitor columnist Mustafa Akyol, argue that Turkey’s local elections matter because they will act as a predictor for this summer’s presidential election in which Prime Minister Erdogan is expected to run. Today’s vote, observers say, will also help to predict the parliamentary elections scheduled for June 2015 (but which may be held at the same time as the presidential election).

But several factors might make today’s local elections and voting in general an irrelevant practice in the Turkish political context.The first reason for this pessimistic outlook is history. Since Turkey’s transition to multiparty politics in 1946, electoral upsets in which an opposition party wins a parliamentary majority have been extremely rare. Successful upsets happened only four times, in 1950, 1965, 1983 and 2002. And opposition parties that took major municipalities from the governing party in local elections, as did the Social Democratic Populist Party (SHP) in 1989 and the Welfare Party (RP) in 1994, failed to secure a parliamentary majority in the next general election.

This point is important because opposition parties’ failure to score major electoral upsets has had dire consequences for Turkey. The Republican People’s Party (CHP), the AKP’s main contender at the moment, failed to win the general elections in 1957 and 1977, which contributed to the military coups of 1960 and 1980. The military felt it had to do what the opposition could not.

Likewise, the SHP and RP failed to win parliamentary majorities in the general elections of 1991 and 1995 after their successes at the municipal level. As a result, they formed shaky coalition governments with other parties, which undermined their political viability. The March 30 vote is a not a good barometer to understand the winners and losers in Turkey’s current climate.

Another reason why Turkey’s elections (today’s local elections as well as the upcoming presidential and general elections) may not matter is more novel. In the wake of the recent corruption scandal, Erdogan turned Turkey’s judiciary and national police department into a political tool. Erdogan’s control over the judiciary and society is nearly absolute: Thousands of police officers and hundreds of public prosecutors have been replaced. The prime minister has banned citizens’ access to social media websites and he has ignored Turkey’s Supreme Election Board (YSK) and its order to stop a controversial AKP commercial. Erdogan has created a situation where the rule of law, separation of powers, checks and balances and good governance mean very little. And there is little guarantee that Erdogan’s successor will use his powers more wisely.

In relation to the emaciation of state and political institutions, the ongoing political crisis has undermined Turkish citizens’ trust not only in their government but also toward each other. Since the Gezi Park protests of last spring and summer, divisions between AKP supporters and opponents have deepened significantly. Erdogan has particularly poisoned public discourse in Turkey to such an extent that, whether the AKP increases its votes to an unprecedented new level or sustains a smashing defeat in all the important municipalities, Turkey will not find peace and quiet.

The problem is not who wins the elections — it is the profound mutual mistrust among those who support the AKP and those who oppose it. Widespread rumors that both the AKP and the opposition will attempt electoral fraud mean the results will only worsen popular anger. And in a democracy where elections worsen social and political differences rather than relieving them, it’s time to be afraid.

At any rate, some opposition groups are just as responsible as the AKP for creating Turkey’s poisonous political climate. For example, the corruption allegations against Erdogan and the AKP came to light only after the party’s fallout with the charismatic preacher Fethullah Gulen’s Hizmet movement, which enjoys a vast network of media outlets and influential bureaucrats in the police and judiciary. In curbing the power of Turkey’s once-omnipotent military, Erdogan and Gulen used to be allies: It was through this friendship that Hizmet-affiliated prosecutors and judges expanded their presence in the court system (against whom Erdogan feels he has not done enough) and the AKP assumed direct control of the appointment of prosecutors and judges after the referendum of September 2010. Today, the people of Turkey are somehow expected to choose one side over the other.

Not that the main opposition party CHP is doing any better. Just as the Hizmet group and the AKP have not come out clean with their mistakes, the CHP has yet to level with the people of Turkey for its support for the “Feb. 28 process” that witnessed the expulsion of thousands of religious Turks from universities and the civil service in the late 1990s. Likewise, the CHP has not admitted that its backing of the Turkish General Staff’s “electronic memorandum” in April 2007 against the AKP, a virtual coup attempt to prevent the election of Abdullah Gul as president, has been directly responsible for the AKP’s paranoid obsession with conspiracies.

Finally, it’s fair to ask whether there is a real alternative to the AKP. Even though I personally rooted for Turkey’s opposition parties in every metropolitan area, municipality and local council on March 30, it is true that the opposition does not offer a real alternative to the ruling party. “Who else can we vote for? Who will pave the roads and collect the trash as well as AKP municipalities?” voters ask. They have a point. But it is also true that some AKP mayors, such as Melih Gokcek of Ankara, have done much to affect their thinking. Gokcek has not been coy about telling constituents that neighborhoods that vote for him on March 30 will get better services.

Whether Turkey will eventually establish a liberal and democratic political system is yet to be seen but it is unlikely that today’s elections will contribute to that outcome. The history of elections in Turkey, the current state of poor governance, the people’s justified cynicism in the system and the lack of viable alternatives means today’s elections will hardly matter. I hope I’m wrong.