An intraparty conflict has become inevitable in Turkey’s center-left opposition as the amnesia-stricken Republican People's Party refuses to discuss the actual reasons behind its failure in the wake of another election defeat. 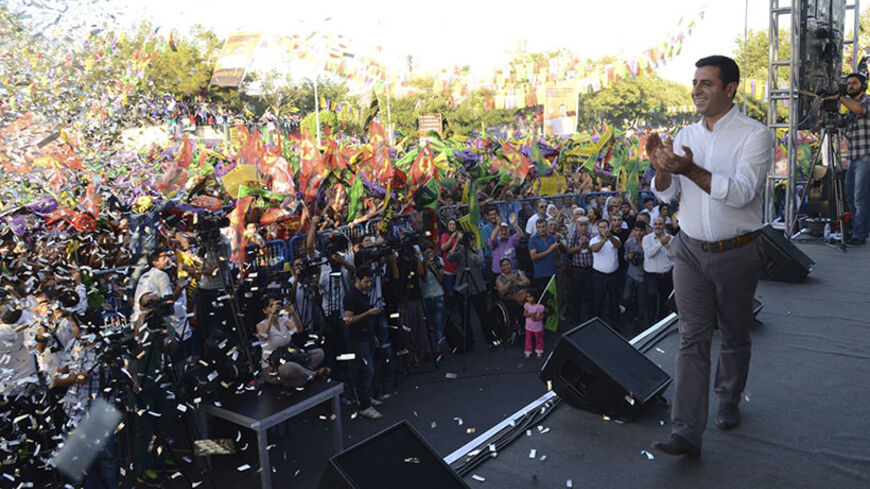 Every alliance has an objective. In Turkey’s presidential elections last week, the odd alliance between the Republican People’s Party (CHP), which describes itself as center-right, and the Nationalist Action Party (MHP), which represents Turkish nationalism, was aimed at stopping Prime Minister Recep Tayyip Erdogan’s ascent to the country’s top post. The two opposition parties were defeated — again.

On Aug. 10, Erdogan became Turkey’s first popularly elected president. Acquiescing to their Sisyphean fate, the CHP and the MHP began again to roll the boulder up the hill, having watched it roll down in every election since 2002. By doing so, they are sealing their own bitter eternity, with the boulder doomed to roll back down again.

The CHP does not bother to even remember the years when the center-right aligned with the Kurds, spoke for change and democracy, swept Turkey from east to west and scored a major electoral victory. The party blamed its latest defeat not on its unprincipled, pragmatist alliance with the MHP but on shortcomings in its electoral campaign, and even saw some success in its failure.

The rightist wing within the CHP — which calls itself “ulusalci,” or neonationalist, and wields no major clout in the party — came up with tragicomic criticism: It blamed the party’s failure on straying from the “left lane.”

Aversion to the Kurds, the malaise of Turkey’s left, began in 1989 when the Social Democratic People’s Party (SHP), the CHP’s avatar at the time, was in its heyday. The party leadership came under merciless attacks over its alliance with the Kurds by the intraparty opposition and Bulent Ecevit, the legendary former premier whose own center-right party was declining fast at the time, who claimed to be defending the values of the “left.” As a result, the Kurds were purged from the party.

All this unfolded in the wake of the March 1989 municipal elections, in which the SHP significantly swayed Turkey’s political course, winning the local administrations in 39 provinces, including the country’s three largest cities. The SHP had also drawn up a report on the Kurdish question and started talks for an alliance with parties standing farther left on the political spectrum.

The party, however, succumbed to internal and external pressure and, carried away by the fascist idea of boosting its vote in ethnically Turkish constituencies, expelled its Kurdish lawmakers on the silly pretext that they had attended a Kurdish conference in Paris. What it got in return was a huge setback in the 1991 general elections — just the opposite of what it had hoped for. This marked the beginning of the center-left’s history of rolling the boulder up the hill.

In place of the Kurds, the SHP aligned — in a coalition government — with the center-right True Path Party (DYP), its archenemy, which had emerged first from the elections. On the Kurdish question, the SHP fell behind even Suleyman Demirel, the DYP leader and would-be president, who, eager to boost his vote, declared he “recognized the Kurdish reality.” Moreover, the party never settled scores with the military regime that followed the 1980 coup.

As the center-right collapsed in the early 2000s, Erdogan’s neoliberal and, according to some, Islamist Justice and Development Party (AKP) filled the vacuum. The theoretical and practical ground for the odd alliance between the stagnating and even shrinking center-left and the MHP, a party whose references often border on racism, was laid in this period. Not surprisingly, the same neonationalist/Kemalist quarters that had ruined the alliance with the Kurds were the masterminds of this convenient ground.

Today, in the new political landscape that would be taking shape in Turkey under Erdogan’s presidency, the CHP, defeated yet again along with the MHP, appeared doomed to stagnate unless it faced up to the Kurdish movement. The party will likely move farther to the right to the extent that it may even rival the MHP, its political partner. Yet, the right lane has long been occupied by the MHP, which saw a notable part of its electorate back Erdogan’s presidential candidacy, and the Labor Party, a nationalist leftist movement.

The pro-Kurdish People's Democracy Party (HDP), for its part, beat all expectations in the presidential polls and is now likely to make further strides. Its dynamic candidate and co-chairman Selahattin Demirtas — a popular Kurdish politician backed by several Turkish leftist forces — mustered close to 10% of the vote, surpassing by three or four percentage points the traditional Kurdish vote and emerging as a serious alternative on the center-left.

The CHP is expected to hold an extraordinary party convention — not only under pressure by the in-house dissidents but also on the initiative of CHP leader Kemal Kilicdaroglu, who wants to teach those dissidents a lesson. And if the party intends to remain a leftist alternative to the AKP, it needs to favor and even align with the HDP rather than to move closer to the MHP. Catching up on the Kurdish question and the ongoing Kurdish peace process and even taking the lead in this realm seems to be becoming a prerequisite for the party’s survival.

Yet, the prospect of the CHP — the Turkish republic’s founding party — transforming itself and producing a leader who can save it from the shackles of the past appears bleak. It seems the party will instead scramble to preserve the ever-shrinking vote of Turkey’s elites, squeezed in the relatively prosperous coastal regions, seeking pragmatist alliances and solutions. That is, it will keep rolling the boulder up the hill until the boulder rolls back down again.

The democracy-deprived mentality that reduced the CHP to its current state will continue to whisper in its ears, “The Turkish army will sooner or later take charge of all this. Hold on, you are almost there.” Then it will add in an apologetic tone: “But Erdogan left no other option.”

Some segments of the Turkish left are no stranger to this mentality and are even infatuated with it, like the death row inmate falling in love with his executioner. The neonationalists/Kemalists are the true masters of this mindset. And the “neopatriarchy” system that Erdogan has created today, casting himself as the nation’s father, guardian and guide, owes much to Kemalism. The system, though said to rest on modern foundations, is nothing but a tradition that the Republic of Turkey has perpetuated ever since the collapse of the Ottoman Empire.

From here on, things look quite complicated.

The AKP’s new chairman and prime minister will be handpicked by Erdogan and will likely determine the AKP’s showing in the June 2015 general elections. If Erdogan’s nominee does lead the AKP to the polls, no one should expect Erdogan to just watch from the presidential palace. He will take to city squares for rallies on behalf of his party and use all means at his disposal in what for him will be the final stage before a constitutional overhaul aimed at installing the absolute presidential system he aspires for.

The CHP, however, still has a chance: The government needs the opposition’s support for the settlement of the Kurdish question, which it calls the “peace process,” and wants to introduce a new constitution. This is a unique opportunity for the party to renew itself, take the lead on the Kurdish question and draw up a new constitution. Should it fail to grasp that opportunity, it will perpetuate its misery of searching an alternative to Erdogan or the AKP on the center-right, as it did in the presidential elections.

Luckily for the CHP, the party’s truly leftist wing is stronger than its neonationalists. Even though this wing is not as vocal as the neonationalists, it is the address where the party can find a theoretical ground. The CHP’s failure to reinvent itself will keep it shrinking with each new flop of the left-Kemalism-nationalism mix.

In the 1995 elections, the CHP barely managed to pass the 10% national threshold required to enter parliament, and in 1999 failed to overcome it. The years of the party’s parliamentary absence were the years when the center-right and its political executioner, the AKP, began to rise before the AKP crushed all its opponents in the 2002 elections. Will the CHP remember that?