Hayrettin Karaman is the ruling AKP’s Islamic jurist of choice. 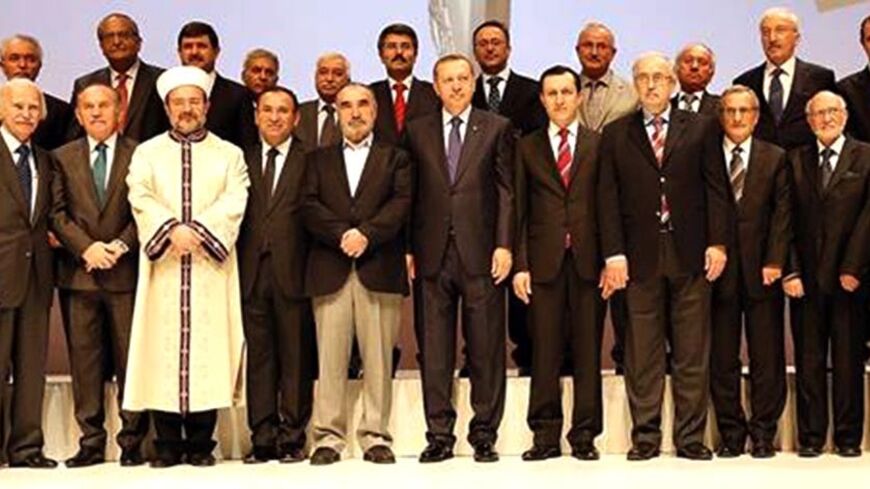 On the night of Jan. 25, Turkish Prime Minister Recep Tayyip Erdogan spoke at an Istanbul conference organized by Turkey's Directorate of Religious Affairs. In the midst of dozens of Islamic theologians and clerics, he condemned “false prophets” in a thinly veiled reference to Fethullah Gulen, another Islamic scholar who Erdogan in fact used to respect. Meanwhile, he praised the scholars around him and presented them with awards. The most notable among this group was the man who posed for pictures at Erdogan's right: Hayrettin Karaman.

This juxtaposition was no accident, for Karaman’s religious views are an important guide for Erdogan's ruling Justice and Development Party (AKP). To make an analogy, one can even say that if the Egyptian Muslim Brotherhood has the Egyptian Islamic scholar Yusuf al-Qaradawi as its religious touchstone, the relatively more modern and progressive AKP has the relatively more modern and progressive Karaman.

Karaman is not a turban-donning cleric, but a professor emeritus of Islamic law who used to teach at the College of Theology of Marmara University in Istanbul until 2001, when he asked for early retirement in protest of the military-imposed and authoritarian secularism of the university. Since then, he has written a triweekly column in Yeni Safak, an Islamist daily newspaper and ardent supporter of the AKP government. His pieces often deal with religious issues, especially matters of jurisprudence, and is widely regarded as an authority on the topic. An argument he often repeats is that Muslims should ideally live under Islamic states, but they can live under secular states (such as Turkey) as well. They just should make sure that they live and act according to the rules and principles of Islam — in every field, including politics.

Such views are naturally shocking to Turkey’s secularists, who believe in an absolute separation between religion and politics, but one must note that Karaman has some reformist views on Islamic law that are refreshing from a liberal perspective. Over the years, for example, he has defended some unorthodox views such as that Christians and Jews can be “saved” in the afterlife, that apostasy from Islam should not be punished and that non-Muslims should be free to follow their “un-Islamic beliefs and practices” even in an Islamic state. He has also argued that the right Islamic political vision is “a world in which freedom of religion and conscience is established, and thus the choice of religion and religious life is based on genuine faith, not oppression.”

In a recent piece, Karaman also opposed the practice of stoning, noting that it does not exist in the Quran and the validity of the secondary sources that promote it is doubtful. In response, some more conservative Islamic voices (such as Cubbeli Ahmet and Fazli Kayaduman) reprimanded Karaman for such “reformist” views.

In short, Karaman’s views are often more progressive than those of more orthodox Sunni scholars. However, he has also proven too conservative on “moral” issues. When Erdogan initiated a public debate in November by saying that he would not allow “homes where girls and boys mix,” Karaman supported this idea of morality policing. He wrote in his Yeni Safak column that in every society, “the values of the majority” should be the basis of legislation, whereas minorities should respect these values and “refrain from using some of their freedoms.” This was widely regarded as a theoretical basis for Erdogan's assertive moral conservatism.

More recently, another argument of Karaman's has been a matter of controversy: his alleged fatwa on corruption.

This rumor — that Karaman gave a religious blessing of corruption — began circulating in the social media after the corruption probe began to investigate certain members of the AKP government on Dec. 17. Word had it that Karaman gave the green light for the government to "encourage" the businessmen who won state contracts to make donations to certain charitable foundations that, not surprisingly, have ties to the government.

In response, Karaman wrote a column Dec. 27 titled "No fatwa can be given to corruption." He denied the rumors that Erdogan personally asked him whether “taking commissions in state contracts” is permissible. Yet, he went on to say, "But many others asked me, 'Is there any problem if we encourage the people who win contracts from the state and make a profit to make donations to charitable foundations?' Here is what I said to them: 'If these people who you encourage to make donations are Muslims and would not have made these donations unless you demanded it of them, … they will not earn the [divine] blessing for it. But, assuming that it is written and transparent, charitable foundations can benefit from such donations.'”

In other words, Karaman saw no problem in the government’s “encouragement” of certain businesspeople to make donations to specific foundations. (One of these foundations, apparently, is TURGEV, a foundation directed by Erdogan's son Bilal Erdogan, who recently announced that he is ready to speak to prosecutors about the corruption charges.)

So was Karaman’s view a “fatwa for corruption?” Probably not. But was it blank check for something ethically questionable? Well, that is up to you. Just make sure to note that Karaman is a very authoritative voice on all such matters, and one should follow his writings closely to understand the inner logic of the AKP circles.