Erdogan counting on elections to recoup from scandals

Turkish Prime Minister Recep Tayyip Erdogan is banking on the polls, not the courts, to vindicate himself from the current allegations of corruption. 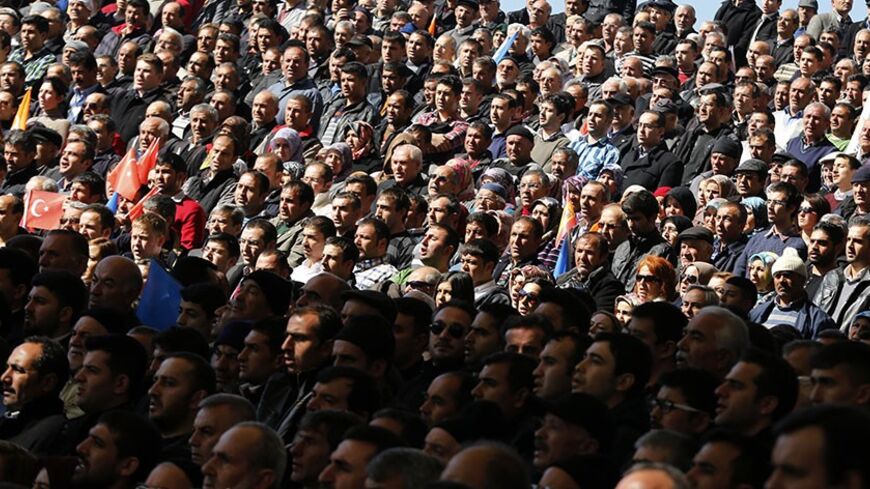 Supporters of Turkish Prime Minister Recep Tayyip Erdogan listen to his speech during the opening ceremony of a new line of the Ankara Metro, Feb. 12, 2014. - REUTERS/Umit Bektas

Failing to roll back mounting allegation of corruption against members of his government and family, and consequently himself, Prime Minister Recep Tayyip Erdogan finds himself increasingly cornered politically. Many are questioning how his political career can survive the scandal.

Constitutionally questionable steps by the government — which Erdogan’s critics see as attempts to cover corruption allegations — appear also to have come too late for him. Developments show that reliance on restrictive legislation to control the judiciary and the media in the age of information technologies is misplaced.

Turkey’s new Internet law, which enables the government-controlled “Presidency of Telecommunication” (TIB) to slap a banning order on any Web page within four hours, failed to stop the latest “tape scandal” Erdogan is facing. Details of this latest twist in the corruption scandal rocking Turkey were given by Cengiz Candar in his Feb. 27 post for Al-Monitor.

This recording on Liveleak.com, which is beyond TIB’s control, has not only dominated the domestic agenda — despite Erdogan’s vehement claims that it is a fabrication — but has also become the focus of international attention on Erdogan.

A Reuters’s report that indicates that a second recording is doing the rounds over the Internet makes matters worse for Erdogan, showing him that these leaks can go on indefinitely. With Turkey turning into “A pirates’ bazaar of bootleg tapes,” as the Financial Times’ Daniel Dombey put it in his Feb. 24 piece on the topic, Erdogan’s troubles seem far from over.

He of course remains adamant that the massive corruption investigation opened by the Chief Prosecutors Office, and leaked to the media on Dec. 17, is “a coup attempt” against his government by followers of the US-based Islamic cleric Fethullah Gulen.

Given the bitter rivalry that has emerged between Erdogan and Gulen — who were once allied against the staunchly secularist Kemalist establishment — it is conceivable that followers of the Gulen movement within the state apparatus and judiciary may have conspired against Erdogan and his Justice and Development Party (AKP).

The corruption allegations put forward by the prosecutors nevertheless remain and continue to stigmatize Erdogan and his government. The abrasive manner in which Erdogan has decided to handle the scandal, on the other hand, has not helped him.

His efforts are widely seen as attempts at deflecting attention away from the scandal toward what he is calling the “Dec. 17 coup attempt.”

Erdogan received an added blow in this regard from Washington this week, after the State Department released its “Country Reports on Human Rights Practices for 2013.” The report lends no credence to Erdogan’s claim of a “coup attempt,” highlighting instead the questionable legal and administrative steps being taken by the government since Dec. 17.

“Of particular note, law enforcement and the judiciary were subject to executive branch influence as the government reassigned thousands of police and prosecutors during the Dec. 17 anti-corruption operation and subsequent scandal,” the report said.

“Authorities have not established a pattern of investigating, indicting and convicting individuals accused of corruption, and there were concerns about the impartiality of the judiciary in the handling of anti-corruption cases,” it added.

Erdogan hopes to survive this crisis with a strong turnout for his Justice and Development Party (AKP) in the local elections to be held on March 30. He and his ministers are claiming these elections will be of existential importance for the country. “Casting wrong vote will make you grovel in misery,” Erdogan said during a public event in Istanbul on Feb. 16, using what his critics charge are scare tactics to influence the electorate.

Erdogan also indicated during a visit to Germany that a strong vote for the AKP in these elections will exonerate his party from corruption allegations by proving it is honest in the people’s eyes.

Many wonder, however, why Erdogan is relying on politics and not the law to clear himself and his government. Meanwhile, Erdogan’s angry attitude and vindictive remarks show that he is preparing to deepen this war against his enemies after the elections.

But the damning leaks to the media and over the Internet are proving his enemies are also resourceful and will not refrain from using what options they have as this war of attrition deepens. Many inside and outside Turkey are therefore wondering what Erdogan’s chances of ultimately weathering this storm are, even if the AKP comes out on top in the local elections.

An increasing number of highly critical editorials in Turkey and in influential international media organs are also prompting this question to be asked increasingly. For example Ertugrul Ozkok, from the influential Turkish daily Hurriyet — where he was editor-in-chief for more than two decades before giving up the job to become a columnist — has been scathing.

Arguing that “the worst is over” after this corruption scandal for the 51% of the electorate that did not vote for Erdogan, Ozkok said tauntingly in his column on Feb. 27 that “if he has no sense” Erdogan will use the current unconstitutional laws he is introducing “to try and establish a fascist regime.”

David Gardner of the Financial Times, on the other hand, reflected the growing sentiment outside Turkey in a commentary that appeared on Feb 27, the same day as Ozkok’s commentary, with the headline “Recep Tayyip Erdogan is now the source of Turkey’s problems.”

“Even if no one dents him at the polls, things can still go badly. If Erdogan continues to lash out at disembodied conspiracies in companies, schools, newspapers, courts and dark rooms he has yet to discover, confidence in Turkey — which is vulnerable to short-term money flows — could collapse,” Gardner said.

Time magazine’s Karl Vick, again on the same day as Ozkok and Gardner, argued in a piece with the headline “Can Turkey’s Erdogan Stay in Power?” that the most pressing issue in Turkey was no longer about the secular or religious nature of the state. “It’s Erdogan. Turks have to decide whether they prefer a strongman over the delicate calibrations required in a system of checks and balances.”

That system took another blow this week after President Abdullah Gul signed the government’s new law on the Supreme Board of Judges and Prosecutors (HSYK), which effectively places the judiciary under government control.

Although he signed this law, it was clear that Gul’s conscience was not at rest. He suggested in a written statement after signing it that the law violated the constitution in no less than 15 of its articles. He said it was up to the Constitutional Court to rule on the constitutionalism of the law, but gave no indication that he would be applying to the court himself.

The main opposition Republican People's Party (CHP) did that after Gul signed the law into effect, but whatever the court rules, Erdogan can use the new law until that ruling, knowing that it will not be retroactive. It is still not clear, however, if Gul did Erdogan a favor or not by singing HSYK law.

There is another vital question that emerges as a result of all this: How long can Erdogan maintain solidarity within his party with all these corruption allegations flying around, before those members who believe they are honest Muslims and do not want to be associated with all this, decide that there must be fire if there is smoke, and start questioning the integrity of Erdogan and his inner circle?

Some deputies already did that after Dec 17 and were hounded out of the party. Given this overall picture, the future looks bleak for Erdogan unless he can reinvent himself after the elections as a genuine democrat, intent on combating corruption. That, however, appears to be a highly unlikely prospect.