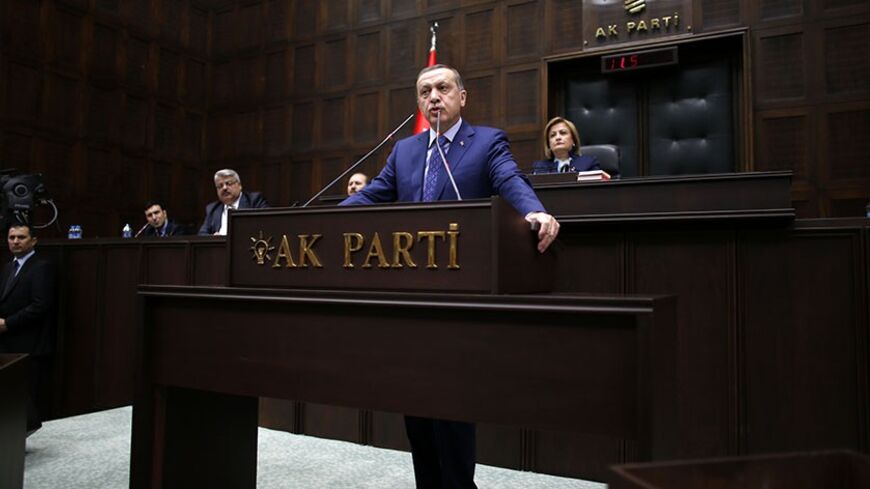 Prime Minister Recep Tayyip Erdogan insists he is faced with an existential threat from domestic and foreign enemies who want to topple him, and appears determined to ratchet up his vindictive rhetoric against his perceived enemies and detractors while critical local elections to be held on March 30 near.

His efforts may not be totally off the mark, either, with some analysts maintaining that his grassroots supporters are not all that concerned with the corruption allegations against members of the ruling Justice and Development Party (AKP), as well as Erdogan’s son Bilal.

Erdogan claims the massive corruption scandal that erupted Dec. 17, implicating four of his ministers — who have since been forced to resign or have been dismissed — is a coup attempt against his government by nonmilitary means. While others talk about the “Dec. 17 corruption scandal” he refers to the “Dec. 17 coup attempt” to hammer this point home.

Erdogan argues that Fethullah Gulen — the self-exiled Islamic cleric who resides in Pennsylvania — and his followers in state institutions and the media are behind this plot against his government. His opponents, however, maintain that Erdogan is spinning a yarn to divert public attention away from the allegations hanging over his government regarding corruption and other improper activities.

Analysts indicate that Erdogan is making some headway, at least in terms of his core support base that brought the AKP to power in 2002 and has kept it there ever since.

“The bottom line remains that, barring an unforeseen game changer, Erdogan and the AKP appear likely to weather the crisis and consolidate their control of the local authorities in the March 30 elections,” noted Wolfango Piccoli, managing director of New York-based Teneo Intelligence, a political-risk advisory firm that has been following Turkey closely for years

Nor is there any indication, according to Piccoli, in his assessment made available to Al-Monitor, that concerns about the government’s steps to bring the judiciary under its control, and to restrict access to the Internet, are gaining traction among the rural and urban masses that form the AKP’s grassroots support.

Many analysts believe that although Erdogan has a chance of coming out relatively strong from the March elections, he will nevertheless fail to replicate past electoral successes given the clouds that have settled over his and the AKP’s reputation.

Erdogan made it clear that the upcoming local elections are of vital political importance for the AKP, and has been calling on the electorate not to look on these merely as local elections, but as elections that will determine Turkey’s future.

Whatever the outcome of March 30, Erdogan’s current remarks show he is aiming for a serious reckoning with his critics and detractors after the elections. Addressing his parliamentary group on Feb. 17, for example, he attacked the free media, which he alleges is being fed with misinformation against the government by the Gulen group.

“But don’t worry, that media will get its answer from the nation on March 30. Have no doubts, whatever headlines they may be using, the final headline will be written by the nation at the ballot box,” he told AKP deputies.

Referring to the Gulen group, Erdogan added, “We will not allow these traitors, this parallel structure, to determine the agenda in Turkey, and to take the agenda hostage.”

The AKP has coined the term “parallel structure” to denote followers of the Gulen group who have allegedly established a “parallel state within the state.” The government unleashed a massive purge after Dec. 17 against thousands of these alleged members of “the parallel structure” in the judiciary and the security forces.

The purge continues today and the expectation is that the AKP will use any success at the local elections to try and run its enemies to the ground, given that there are presidential elections this summer and general elections planned for 2015. In other words, Turkey is faced with the prospect of more, not less, political and economic turmoil after March 30.

Disregarding the judiciary whose investigations into corruption by members of his party are technically ongoing, Erdogan has also made it clear that he expects a strong result from the March elections to exonerate his government from these allegations.

“Now we will have elections once again on March 30. If the people return us as the No. 1 party, this will mean that this administration is honest,” he told a gathering in Berlin during an official visit earlier this month.

Meanwhile, the steps being taken by the AKP — covered extensively in Al-Monitor’s Turkey Pulse — aimed at bringing the judiciary under government control were also seen as preparations by the government for its battles ahead.

The draconian law clamping down on the Internet, which came into force after President Abdullah Gul endorsed it to the detriment of his reputation, as Cengiz Candar pointed out in his Feb. 19 post for Turkey Pulse, is also seen in the same light.

“We share the serious concerns raised by the OSCE [the Organization for Security and Cooperation in Europe] and others that the law has the potential to severely restrict free expression, freedom of the press and access to information over the Internet,” Marie Harf, a deputy spokeswoman for the State Department, said in Washington on Feb. 19.

These remarks did not go down well among AKP official and members, of course, many of whom believe, having taken their cue from Erdogan, that Washington is somehow involved in efforts to topple the AKP government.

Erdogan’s ever-growing list of domestic enemies is currently headed by followers of the Gulen group. Erdogan is also targeting the Turkish Confederation of Businessmen and Industrialists (TUSKON), the umbrella organization for prominent Islamic businessmen who are close to Gulen. The Turkish Industry and Business Association (TUSIAD), the umbrella organization for Turkey’s secular and pro-Western businessmen and industrialists, is also high on Erdogan’s list of enemies because it has called on the government not to undermine democracy and the rule of law. The independent media, which have been revealing facts that embarrass the government — as well as anyone, any group or any organization that remotely supported last summer’s Gezi Park protests or was involved in them — are also high on Erdogan’s list of enemies to be reckoned with.

Looking at all this, there is also the question of how the Erdogan government hopes to play an influential role in efforts aimed at stabilizing the Middle East, when it is so embroiled in such a deep and messy domestic struggle, which is set to last for some time.

Erdogan’s strong Sunni-oriented and pro-Muslim Brotherhood positions on Syria, Egypt and ties with Israel, which he uses to curry favor with his Islamist grassroots followers, is making Ankara’s efforts at playing a central role in the Middle East even harder.

Tellingly, US President Barack Obama held a phone conversation with Erdogan on Feb. 19, after a gap of six months and 10 days due to annoyance with Ankara over Erdogan’s remarks accusing the United States of fomenting unrest in Turkey. According to the White House summary of the conversation, Obama “affirmed the value he places on a strong, mutually respectful bilateral relationship with the Republic of Turkey and expressed his view that Turkey can demonstrate leadership in the world through positive engagement.”

The readout continued: “The leaders also discussed the need for strong, sustainable and balanced growth in the global economy, and the president noted the importance of sound policies rooted in the rule of law to reassure the financial markets, nurture a predictable investment environment, strengthen bilateral ties and benefit the future of Turkey.”

One need not be a professional diplomat to cut through the diplomatic niceties in this readout to understand the core message Obama tried to convey to Erdogan during their conversation. Given the degree to which he has embroiled himself in what he sees as an existential struggle, however, it is unlikely that such friendly exhortations will have a calming effect on Erdogan, who is all steamed up and ready to battle his enemies, imaginary or otherwise.