The Turkish prime minister’s campaign against the Internet is worrying democracy and free media advocates. 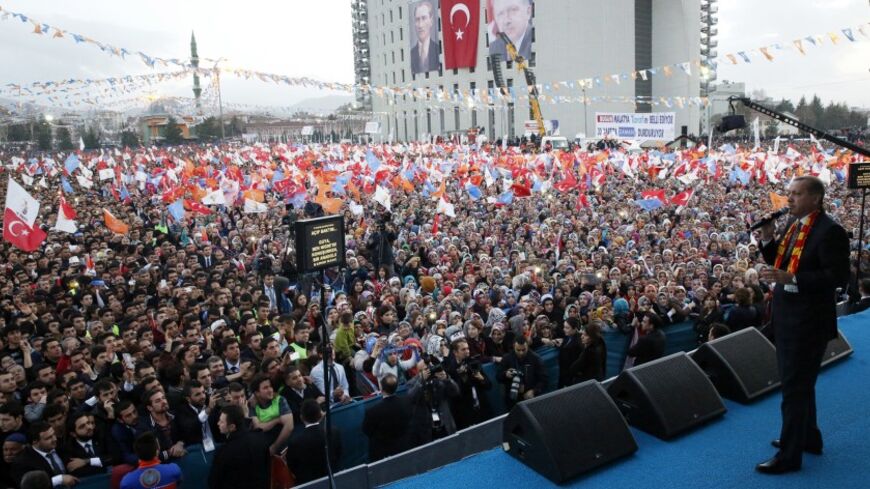 Prime Minister Recep Tayyip Erdogan has tried hard to bring the Turkish media under government control, succeeding to a significant extent by getting crony businessmen to buy major national dailies and television channels.

Turkey has nevertheless remained an open society to a large extent with regard to the flow of information to the public, due not only to the independent portion of the media that continues to resist government pressures but also the Internet, and particularly social media.

It is no surprise then that the Internet should have become the bane of Erdogan’s life, particularly after taped conversations implicating him and members of his government in massive corruption allegations started appearing on video sharing sites.

Kadri Gursel’s March 7 post for Al-Monitor gives details about a voice recording leaked in this way, which has provided more fodder for his political rivals just as his Justice and Development Party (AKP) heads for crucial local elections at the end of this month.

Erdogan’s troubles with social media began after last summer’s Gezi Park protests in Istanbul, and the following nationwide anti-government riots during which many people were mobilized through Twitter, the social networking service.

“There is now a scourge called Twitter. The biggest lies can be found there. This thing called social media is currently the worst menace to society,” Erdogan complained bitterly on June 2, 2013.

Aware of the growing political threat to itself from social media, the Erdogan government introduced a draconian Internet law that effectively allows the head of Turkish Telecommunications Directorate (TIB), a government appointee, to close down any Internet site in four hours.

The new law has been criticized by Washington and the European Union, while international watchdog groups, including the CPJ, have issued statements maintaining that this is just another indication of Erdogan’s growing authoritarian and anti-democratic tendencies.

President Abdullah Gul, who has always claimed to be a strong supporter of the freedom of the press, caused deep disappointment at home and abroad after he turned down calls to veto the Internet law.

Gul, who with Erdogan is a founding member of the AKP, maintains in his own defense that he forced the government to makes positive changes to the law before he signed it, but these changes have generally been deemed to be insufficient.

Meanwhile, the voice recording on liveleak.com — after the new Internet law was introduced — in which Erdogan was allegedly telling his son Bilal to get rid of tens of millions of euros in his possession, proved the futility of trying to control the Internet, especially if the source was outside Turkey.

That, however, has not prevented Erdogan from trying to introduce further restrictive measures against the Internet to prevent more unsavory revelations about his family and government based on both legal and illegal eavesdropping. That these leaks over the Internet are coming almost on a daily basis shows the difficult if not impossible task Erdogan and his government are facing.

Erdogan nevertheless signaled, during a March 5 interview with the pro-government ATV and A-HBR channels, that his government could, to use his words, “shut down” YouTube and Facebook, the online social networking service, after the local elections on March 30.

“We are determined in this regard. We will not allow this nation to be victims of YouTube or Facebook. We will take whatever steps are necessary, including shutting them down. These people or these organizations encourage all kinds of immorality and espionage for the sake of their profits. You cannot have such an understanding of freedom,” Erdogan said.

Selahattin Demirtas, the head of the pro-Kurdish Peace and Democracy Party was more forthright: “He says he will shut down social media that is revealing dirty ties. You should first shut that mouth of yours which is agitating the public,” Demirtas said during a rally in predominantly Kurdish Diyarbakir province.

The mass-circulation daily Hurriyet, for its part, published a list of anti-democratic countries, headed by North Korea, where Facebook and YouTube are officially banned, and indicated that this was the group of authoritarian countries Erdogan was dragging Turkey into.

Erdogan’s remarks were also picked up by the international media, which gave the topic wide coverage, and were criticized by Western governments. Asked about these remarks during her daily press briefing on March 7, US State Department spokeswoman Jen Psaki, for example, did not mince her words: “We are concerned by any suggestion that social media sites could be shut down as the Internet law is implemented. We’re looking to Turkey to uphold its commitment to respect the fundamental freedom of expression. Independent and free media are essential to an open society and an accountable system of government.”

Even Susan Sarandon, the famous Hollywood actress and human rights activist, who has focused her attention on Turkey since the Gezi Park protests, commented on Erdogan’s remarks.“I hear [Erdogan] is saying he will shut down Facebook and YouTube. This means things aren’t going too well for him. You face the whole world the minute you start imposing censorship on the press,” Hurriyet quoted Sarandon as saying during a public event in New York.

But it was Gul — already under fire for not vetoing the restrictive new Internet law even though he was a self-professed admirer of the Internet — who was left in the most difficult situation after Erdogan threatened to shut down Facebook and YouTube.

Asked by journalists about Erdogan’s remark, Gul said it was out of the question that these sites could be shut down. “First, I would like it to be known that Turkey is a democratic country based on the rule of law. We would like to see freedoms strengthened,” he said, adding that Facebook and YouTube were legitimate international platforms.

He nevertheless felt the need to add some balance so as not to appear as if he were opposing Erdogan and, declaring the obvious, said, “What is a crime in real life is also a crime in the cyberenvironment.”

It is not clear whether it was Gul’s remarks or the harsh criticism he was getting at home and abroad that forced him to do so, but Erdogan appeared in recent days to have climbed down a little on his initial remarks. He is nevertheless sticking to his guns on this score and signaling that his government intends to introduce some steps against these sites.

“Facebook and YouTube have started taking on a characteristic that threatens national security. In the West, they issue a warning in such cases and stop those broadcasts,” Erdogan was quoted as telling reporters accompanying him on his plane while he was returning from a political rally in the eastern city of Urfa.

“There is the need to find a framework for this. The Radio and Television Supreme Council (RTUK) is involved in preparations on this topic. But I never talked about a total shutdown. Such a total shutdown is out of the question,” he added, clearly contradicting what he said during his ATV and A-HBR interview.

It remains to be seen what, if anything, Erdogan can do against YouTube and Facebook, and other similar services on the Internet, other than relying on normal legal procedures to be found in the West also against slander and libel.

The bottom line, however, is that Erdogan is aware things aren’t going too well for him, as Susan Sarandon put it, and is clamoring to prevent things that ultimately appear unpreventable in this age of information technologies.

That he is consolidating his authoritarian image as he does so does not appear to bother him much at present. This could be taken as a further sign of the difficult situation he increasingly sees himself in, with so many corruption charges looming over his head, as well as unwelcome revelations about democratically unacceptable behavior by him and members of his government.