Erdogan takes on the Internet

The Turkish government is drafting legislation to restrict public access to certain websites. 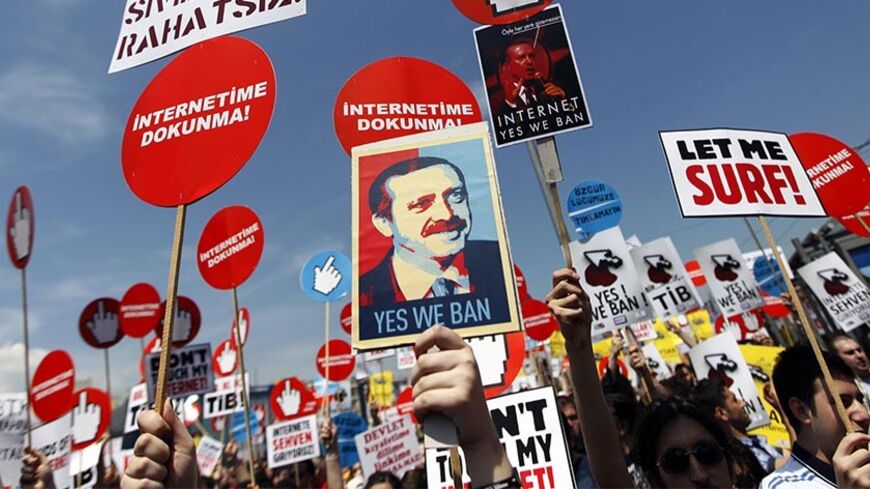 Demonstrators hold placards with some featuring a picture of Turkish Prime Minister Recep Tayyip Erdogan during a protest against Internet censorship in Istanbul, May 15, 2011. - REUTERS/Murad Sezer

Prime Minister Recep Tayyip Erdogan has never been at peace with the Internet. His animosity toward it increased after last summer’s Gezi Park protests proved how effective this medium can be in mobilizing the public politically. Already under international scrutiny over its negative approach to press freedoms and the freedom of expression, his government has now prepared draft legislation that will enable it to arbitrarily decide which websites the public will be allowed to enter, and which ones will be banned.

The move has elicited strong criticism from Turkish Internet watchdog groups, and raised eyebrows in the European Union, which is already concerned over legal steps being taken by the government that are clearly designed to increase its powers over the judiciary.

The general belief is that this is just the latest move by the government against basic democratic principles that are under increasing threats in Erdogan’s Turkey.

Many critics at home and abroad are convinced that the ruling Justice and Development Party’s (AKP) aim in taking these legally questionable steps is to protect itself against politically embarrassing revelations and allegations, such as the ones being made currently under the massive corruption and bribery investigation that has shaken the government to the core.

That investigation, much to Erdogan’s annoyance, has not only climbed to the top of the public agenda but has also undermined his claim to be heading a government that fights against corruption like no other previous Turkish government. Rather than facilitate the investigation, which implicated four ministers from his government who have since been forced out of office, Erdogan sees an international conspiracy behind this scandal. He claims the aim of this conspiracy is to topple him.

His government is justifying all the anti-democratic steps it is taking now by arguing ironically that this has to be done to avert a coup attempt by anti-democratic elements lodged deep within the state apparatus. The Islamist Gulen movement, which was once his natural ally, is Erdogan’s prime suspect in this “conspiracy” for reasons explained extensively in Al-Monitor’s Turkey Pulse.

Instead of introducing a separate bill for its proposals on the Internet, the government has included these proposals in what is referred to in Turkey as a “sack bill,” which denotes a series of legislative changes on various topics that will be submitted to a single vote in parliament. Erdogan and his ministers obviously hope this will increase the chances of passing their proposals for the Internet.

If accepted, this legislation will enable the Ministry for Transport and Communication, and/or the Directorate of Telecommunications (TIB), to close down any site on the Internet without a court order. Presently, there is the need for such an order to do this.

Under the proposed legislation the government will also have the authority to block individual Web pages rather than the whole site. This will also give it control over individual tweets or YouTube uploads that are deemed by the government to be “inappropriate.”

When tasked about how democratic all this is, government officials are quick to bring up arguments about the need to protect the youths against harmful influences on the Internet. This is generally taken as referring to sexual content. Turkey is already a champion with regard to the number of pages that have been blocked on these grounds. Their arguments in doing this, however, go way beyond European standards governing harmful sites such as the ones depicting and promoting child pornography and/or human trafficking and slavery.

Many Internet sites have also been blocked in Turkey to date by court orders on other grounds, such as defaming the founder of the republic, Mustafa Kemal Ataturk, or insulting religious beliefs, which in this case means Islam and not, for example, Judaism — against which Turkish Islamists rail constantly and often insultingly.

Within the past week alone, Vimeo, the popular website over which users can share their generally artistically oriented amateur videos, and YouTube, the worlds most popular video-sharing website, were blocked temporarily on court orders, although no explanation was given for the blockage.

These recent examples show that the inclination to censor the Internet, in conjunction with attempts to bring the media under government control, is very much alive and kicking in Turkey. The only restraining factor for the government until now has been the need for a court order. This, however, will not be needed if the new legislation is adopted, thus making the business of arbitrary and politically motivated censorship even easier for the government.

The new proposal also establishes a “Union of Service Providers,” which will bring all providers under one umbrella. This union will have to act within four hours to have the government ban on any site or Web page implemented. The only recourse available to service providers or owners of the website in question will be to go to court to try and get the ban annulled, but only after it has been implemented.

Given the way the government is trying to bring the judiciary under its absolute control, after the current corruption and bribery scandal broke, Internet watchdog groups do not set much store by this recourse. The general view is that if Erdogan gets hold of the reins of the judiciary, as he obviously wants to, going to court to have a ban on an Internet site or page will be an exercise in futility.

In addition to all of this, the government is also introducing stipulations in its proposed legislation on the Internet that will prevent sites or Web pages deemed inappropriate to be entered by other means such as the use of proxies, alternative DNS numbers or VPN services — all of which can be done today.

According to the proposed legislation the “Union of Service Providers” will also have to keep records on all the sites their customers are entering and make this information available for the authorities for a period of two years. The government will thus gain the opportunity to follow the activities of an estimated 34 million Internet users and establish negative profiles for “undesirable individuals” on the basis of this information.

It is no surprise, therefore, that the head of the Turkish Informatics Foundation (TBV), Faruk Eczacibasi, has spoken up on behalf of the millions of people who are concerned with the government’s latest move against the Internet.

In a statement on the topic, Eczacibasi — a member of one of Turkey’s most respected industrial families and a patron of the liberal arts, as well as a staunch believer in EU standards for democracy — pointed out that they have already been expressing serious concerns about the present law 5651 on the Internet introduced in 2007.

“We have been saying since 2007, when this law came into force, that it would harm our country’s chances of becoming a society based on knowledge. In 2012, the European Court of Human Rights also ruled that this law violated the freedom of expression as well as other human rights,” Eczacibasi said.

“At a time when we continue to call for these mistakes to be corrected, and for human rights to be respect while monitoring the Internet, we regret to see the exact opposite happening,” he added, going on to remind that Turkey is a EU candidate country.

“This why trying to make a restrictive law, which the European Court of Human Rights has deemed to be 'a violation of human rights' even harsher, is clearly unlawful,” Eczacibasi said.

Others concerned with the topic are echoing Eczacibasi’s sentiments and trying to warn the public against a move that will enable the government to censor the Internet at will and with no encumbrances. Erdogan and his ministers are not in any mood to listen, however, having become obsessed with the idea that they are facing a conspiracy that is also utilizing the Internet.

Instead, they are justifying all the undemocratic steps they take, including those against press freedoms and freedom of speech, in the name of “protecting democracy.” As for the absurdity of this claim, it seems to be either totally lost on them, or they are cynically aware of it but simply do not care because they have a higher mission to fulfill.