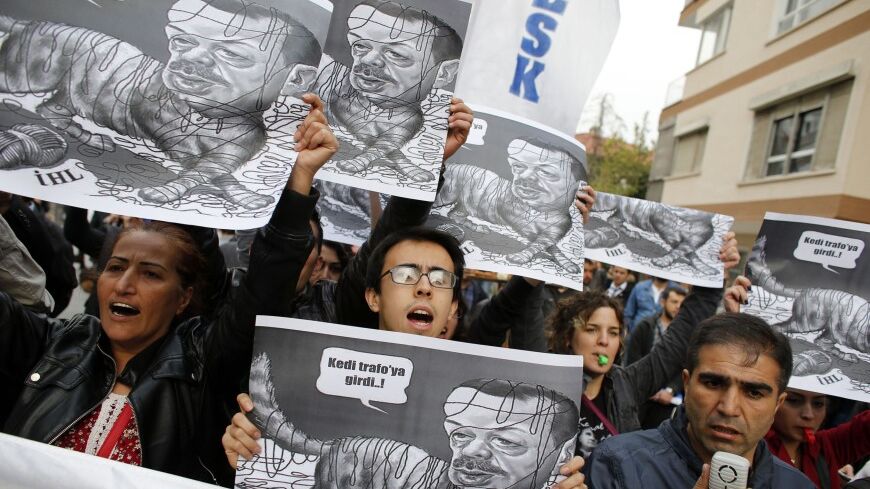 Prime Minister Recep Tayyip Erdogan will not rest until the Internet is fully under government control in Turkey and social media under his feet. He's now signaling his intent to use the strong support his Justice and Development Party (AKP) received in the March 30 local elections to this end. His methods, however, are bound to be interpreted in the West as steps that further erode democracy and the rule of law in Turkey.

Not bothering to dwell on the irony it entails, his government is also now using alleged insults against Mustafa Kemal Ataturk, the founder of the Turkish republic revered by secularists and opponents of the AKP, to keep the government’s recent YouTube ban in place, despite a court ruling ordering its lifting.

Having rejected the Constitutional Court’s unanimous judgment, which holds that the government’s ban on Twitter must be lifted immediately, Erdogan and his ministers as well as jurist members of the AKP are seeking ways to discredit the opinion. Their stance, however, flies in the face of the position held by President Abdullah Gul, one of the first to defy the Twitter ban, by using a virtual private network (VPN). While Erdogan says he has no respect for the April 2 ruling on Twitter by the highest court in the land, Gul says he is proud of the decision, recalling that he appointed 10 of the 17 Constitutional Court judges.

“They arrive at these rulings on the basis of universal law. This will increase trust in the [Constitutional] Court. This is something I take great pride in,” Gul said to reporters accompanying him on an official visit to Kuwait on April 3. Gul’s remarks also contrast sharply with Erdogan’s comment that the Constitutional Court’s ruling is not “national.” Gul’s remarks are in keeping with the position of Hasim Kilic, the president of the Constitutional Court, who has said that they do not rule according to national dictates, but according to universally accepted legal values, which are also enshrined in agreements signed by the Republic of Turkey.

Disregarding all of this, Erdogan and Bekir Bozdag, his minister for justice, insist that the high court exceeded its authority by accepting the individual applications made to it for annulling the Twitter ban before the plaintiffs had exhausted all other legal recourse. Taha Akyol, a leading legal expert and well-known columnist, explained to Al-Monitor why this contention is wrong. “If the Constitutional Court deems that an application made to it has to be ruled on immediately to avert an imminent injustice, then it has the right to arrive at such a ruling before lower courts have ruled on it,” Akyol pointed out. Other leading legal experts corroborate Akyol's view and also note that the same rule applies at the European Court of Human Rights, whose jurisdiction Ankara has accepted and to which many Turkish citizens have applied without exhausting all legal recourse in Turkey.

Opposition politicians contend that the only reason Erdogan is arguing as he does on this topic is to buy time and keep the Twitter ban in place for as long as possible as well as to discredit members of the Constitutional Court in the eyes of his supporters. He appears to be succeeding in the latter based on commentary in the pro-government media, a unified chorus parroting his line against the justices. Many analysts expect the government to ratchet up these attacks after the court on April 11 annulled the key articles of the recent law on the Supreme Board of Judges and Prosecutors (HSYK). After the Dec. 17 corruption scandal broke, implicating cabinet members and others, the Erdogan government acted hastily to change this law and hand power over the judiciary to the minister of justice. The move has been widely criticized in Turkey and abroad for undermining the separation of powers principle.

Meanwhile, Burhan Kuzu, a leading AKP deputy and law professor, has used his right as an individual to petition the Constitutional Court in what opponents of the government view as goading the members of the court into reinstating the Twitter ban. In his application, Kuzu argues that insults directed at him over Twitter violate his individual human rights. He, therefore, wants the court to rule that such attacks on individuals must be removed by Twitter and to allow closure of this social network if they are not. He is trying in this manner to stand the court’s initial ruling, that the Twitter ban is a violation of individual rights, on its head.

The principal argument the government has been using against Twitter is that it has no offices in Turkey and hence no accountability in terms of insulting content. It also pays no taxes for income obtained from advertising aimed at Turkish users. The government also maintains that while Twitter officials are quick to react to applications by Western governments to have offensive content removed, it refuses to do so when similar applications are made by Turkey. The press has reported that Twitter officials are expected in Turkey in coming days to discuss these issues. It is also being reported that Twitter might open an office in the country, although this claim has not been confirmed.

Another headache for Erdogan and his ministers: A court in Ankara lifted the government’s ban on YouTube, which was stifled after someone posted an illegally recorded and highly sensitive discussion on Syria that was held in Foreign Minister Ahmet Davutoglu’s office and attended by Hakan Fidan, the head of MIT, Turkey’s intelligence service. Citing the Constitutional Court’s Twitter ruling, a lower court in Ankara’s Golbasi district held on April 9 that the YouTube ban violated human rights and must be lifted.

The Information and Communications Technologies Authority (BTK), a public institution, has, however, refused to comply. “The measure blocking access to the YouTube.com Internet site remains in place,” the BTK said in an April 9 statement released on its website. It said the ban would remain in place until content insulting to Ataturk is lifted. This argument was later repeated by Lutfi Elvan, minister of transportation and telecommunications. It is interesting to note that no reference was made by the minister to the Syria conversation in Davutoglu’s office although the recording remains on the site.

Cynics were quick to belittle this newfound sensitivity by an Islamist government toward Ataturk, recalling that such content has been on YouTube for a long time. The biggest irony of all, however, is that despite the YouTube ban and the government’s effort to ban Twitter again, any Turkish citizen with VPN can access these sites. Those who are already doing so include President Gul and other officials from Erdogan’s government and party.

Erdogan may be gearing up for another round in his efforts to ban social media, but developments show that until he gains full control over the Internet, which is technically impossible, this will not happen. Developments also reveal that this is not even legally possible, at least until Erdogan changes the constitution to make the Constitutional Court dance to his tune.

Until such time, Erdogan can only play cat and mouse with social media, which does nothing but further tarnish his international reputation, no matter how much admiration it generates among his conservative Turkish followers, for whom, it appears, liberal democratic values do not much matter anyway.