Turks question why President Recep Tayyip Erdogan said it would be good for former President Abdullah Gul to run for parliament. 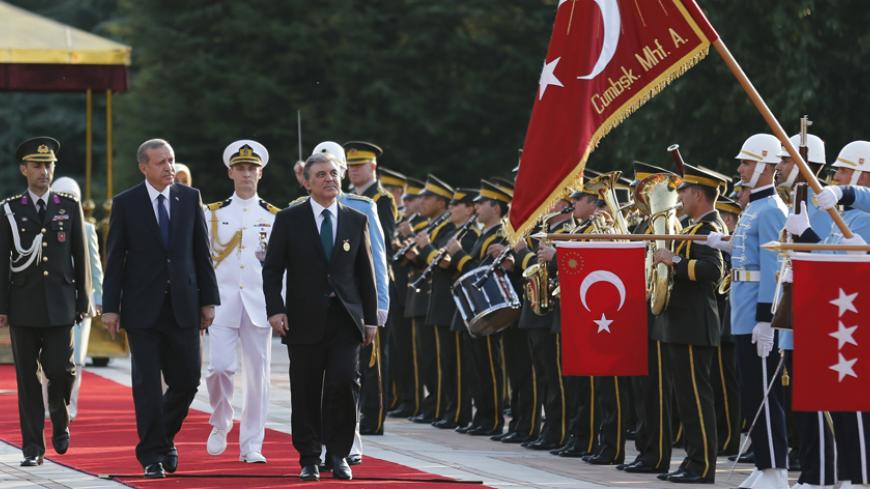 Ever since he was outmaneuvered and distanced from the Justice and Development Party (AKP) before the 2014 presidential elections by Prime Minister Recep Tayyip Erdogan — who subsequently was elected president — many have been wondering what the future holds for former President Abdullah Gul.

Gul is back in the limelight with much speculation surrounding the possibility that he may run as a candidate from the AKP in the general elections June 7. Sources close to Gul have been quoted as saying he will not run but this has done little to stop the rumor mill from churning.

“If you ask me, it would be good if he decides to do so,” Erdogan said when questioned by reporters March 6. Erdogan was speaking following reports he had spoken to Gul over the phone the day before. He tried to downplay the political significance of this conversation, saying he had called Gul to convey his wishes for Gul’s ailing father to get well soon.

Erdogan’s approval of Gul’s candidacy was nevertheless picked up instantly by political commentators, resulting in mixed reactions, because it is known that he and Gul are at odds over a number of key issues.

If Gul were to run, he would clearly be elected, given the weight of his political stature. His presence as an influential founding member of the AKP, however, would rattle the party in ways that would not suit Erdogan. It would also raise questions about the future of Prime Minister Ahmet Davutoglu, who is Erdogan’s appointee.

Gul has made it clear that he does not approve of Erdogan’s desire to introduce a presidential system lacking a strong system of checks and balances. He has also opposed the draconian security law the government is trying to force through parliament, and which Erdogan wants to see implemented before the June elections.

Responding to reporter’s questions in Istanbul on Feb. 20, Gul said his views on a presidential system for Turkey were well known.

Asked about the government’s new security law, Gul said he believed this had to be reviewed, declaring that security matters should not be based on developments prompted by a set of short-lived circumstances.

These are clearly not the kind of remarks Erdogan wants to hear from Gul.

Gul expressed similar views before the presidential elections in August 2014, prompting Erdogan to distance Gul from the AKP with various political maneuvers. After becoming president, Erdogan needed a pliant person to head the AKP and become prime minister. He selected former Foreign Minister Ahmet Davutoglu, who has not disappointed him yet.

It did not take long for Erdogan to reflect his displeasure over Gul’s latest remarks.

“They say a Turkish-style presidential system will not do. It will do quite well,” Erdogan said defiantly, without naming Gul.

Erdogan pointed to the different kinds of presidential systems in the United States, Mexico, Cuba, Russia and France to bolster his argument.

Given the differences among them, many are asking why Erdogan said it would be good if Gul ran in the elections. The explanations given are varied and show there is no clear answer to this.

Taha Akyol, a prominent commentator on political and judicial matters for the daily Hurriyet, believes the differences between the two men are significant. He maintained in his column that Erdogan was merely being polite when he said Gul’s candidacy would be a good thing. “It seems Erdogan was merely talking out of courtesy when asked about the possibility of Gul’s candidacy,” Akyol said.

Akyol recalled, however, that Erdogan tried to introduce a law in 2012 — later rejected by the Constitutional Court — that would have prevented Gul from running for president again. As it turned out, Gul decided not to run for re-election.

Akyol also recalled that after being elected president, Erdogan got the AKP to hold its general congress — called to elect the party’s new leader — a day before Gul officially gave up the presidency. This prevented any possibility that Gul might be elected as the AKP’s new leader.

Gul was reportedly angry over these moves, although he did not reflect this openly. It was his wife, Hayrunissa Gul, who exploded during their farewell reception at the presidential palace in August 2014. “I will stay silent for now but not for long. I will be the one who starts the real intifada [uprising],” she said angrily, arguing that her husband had been left facing political machinations from his own political quarters.

In his commentary on the topic, Mehmet Yilmaz, another prominent columnist for Hurriyet, asked whether Erdogan would really want Gul back in politics, and listed two possibilities.

“The first is that Erdogan wants Gul to be elected to parliament, but to sit there quietly and remain within limits drawn by [Erdogan],” Yilmaz said. He said that while it seems unlikely Gul would settle for this, it could not be discounted due to the vagaries of politics.

Yilmaz said the second possibility is that Erdogan may be priming Gul to replace Davutoglu as the leader of the AKP. “We know that President Erdogan keeps close tabs on the nation’s political pulse through opinion polls. … If these indicate that the AKP is facing a meltdown under Davutoglu, Erdogan may prefer to avail of Gul’s political prestige,” Yilmaz argued.

Indicating that the main priority for Erdogan was the AKP’s performance, Yilmaz suggested Erdogan could postpone his plans for a presidential system for the sake of the party’s political well-being. He did not discount the possibility that Gul may also come around eventually and for political reasons accept Erdogan’s plans for a presidential system.

This is not beyond the realm of possibility, since Gul endorsed almost every law the government sent to him when he was president and Erdogan was prime minister. These included the restrictive Internet law and the highly controversial law on the Supreme Board of Judges and Prosecutors.

Ali Saydam, who writes for the pro-government Yeni Safak, believes that Erdogan might have endorsed Gul’s candidacy for parliament knowing that Gul does not want this. “It is possible that [Erdogan] made this call for tactical reasons to consolidate the AKP’s strength, and give it order and unity,” Saydam said.

Murat Yetkin, the editor-in-chief of Hurriyet Daily News, on the other hand, believes that Erdogan’s motives may not have been all that innocent. He indicated in his column that “it is not clear if Erdogan commended or undermined Gul” with his seemingly innocent remark on Gul’s candidacy. Yetkin said Erdogan’s remark “gives one the impression that Gul’s return to the AKP is dependent on Erdogan’s permission.”

Taha Akyol quoted sources March 10 who said Gul had decided not to run in the June elections, although there was no immediate statement from Gul’s camp to confirm this.

Given the speculation surrounding his name, there is a strong possibility that Gul will decide not to run in June. This, however, will mean Erdogan’s shadow was too much to bear, and could leave him in political obscurity for the foreseeable future. Gul clearly faces some hard choices.