AKP mavericks who voted against the party line to impeach four former ministers are facing accusations of treachery and will most likely be weeded out of the party before June elections. 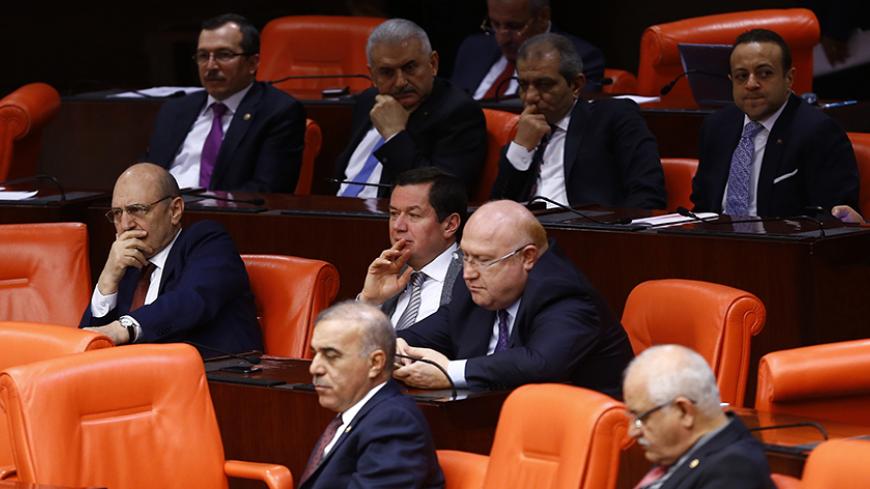 In the Turkish parliament this week, a majority of deputies from the ruling Justice and Development Party (AKP) voted to prevent four former ministers from being impeached at the Supreme Council on charges of corruption, in a victory for President Recep Tayyip Erdogan.

It was not, however, the flawless victory Erdogan wanted, as a larger than expected number of AKP deputies voted the other way, resulting in accusations of treason being leveled at the maverick deputies, and fueling speculation of a split within the AKP ranks.

Regardless, Erdogan is not expected to suffer any major political consequences over this development, even if it is an annoyance and gives the opposition some much-needed ammunition. Meanwhile, his supporters in the AKP have been given an opportunity to weed out the mavericks and reinforce their positions in the party as it prepares for elections in June.

It was known all along that the opposition would vote as a bloc in favor of impeaching the former ministers. The AKP was also expected generally to vote as a bloc against impeachment, despite suggestions that some AKP deputies were not convinced about their innocence.

Erdogan still contends that the corruption scandals involving the ministers that broke out in December 2013 while he was still prime minister were a coup attempt against his government by supporters of his nemesis, the Pennsylvania-based Turkish cleric Fethullah Gulen.

Earlier this month, the AKP members who made up a majority of a parliamentary inquiry commission voted unanimously against recommending impeachment for the former ministers.

The final decision rested with parliament, which voted this week in four separate secret ballots against sending the accused ministers to the Supreme Council. Since the AKP holds the majority of seats in parliament, the support of 50 AKP deputies was needed for the 276 votes required to impeach the former ministers.

Although the accused former ministers were let off the hook, the fact that between 12 and 48 AKP deputies ended up voting against them — the number varied with the minister in question — caused great anger among Erdogan’s supporters in the party.

Samil Tayyar, a deputy from the southeastern city of Gaziantep who has built a reputation as one of the most caustic members of parliament, was quick to condemn the mavericks.

“This is an operation against Recep Tayyip Erdogan by a band of traitors within our ranks,” said Tayyar, a political correspondent, in an interview. “We see that there is a need for a serious weeding-out of people who don’t understand the new Turkey. He went on to say that the names of the mavericks would be determined within 48 hours.

Tayyar’s views were seconded by Mehmet Metiner, an AKP deputy from the southeastern city of Adiyaman, who also writes a column in the pro-government Star and is also known for his abrasive manner.

“We know the game you are trying to play within the party,” Metiner wrote after the vote. “Your real problem is with Erdogan and his leadership. … But you should know all of your steps will come to naught,” adding, “We are used to traitors in our midst.”

Not surprisingly, given such attitudes in the AKP, many of Erdogan’s opponents hope that this is the first sign of a long-desired split within the AKP that will also undermine Erdogan’s political ambitions. Such expectations appear premature, though, since the AKP remains the most likely winner of the June elections.

It is also clear that Erdogan and his supporters in the AKP will move quickly to consolidate their position before any real opposition to them crystallizes within the party. Erdogan also has more reason to ensure that although he is no longer the official leader of the AKP, he will be the one determining the list of candidates for the next elections.

AKP officials insist that Erdogan and Prime Minister Ahmet Davutoglu will create the list together, but there is little doubt as to whose choices will dominate.

Murat Yetkin, the editor-in-chief of Hurriyet Daily News and a well-known columnist for Radikal, also believes that the vote in parliament represents the end of what he refers to as “the AKP’s first term.”

Yetkin pointed out that there are 70 deputies who will not be running in the next elections due to the AKP’s rule preventing anyone from running for parliament more than three times. He suggests that the number of AKP mavericks in this week’s vote is therefore not very significant.

“The first AKP term has filled its ‘use-by’ date for Erdogan,” Yetkin wrote in his column, saying that the result of that vote only showed that Erdogan has no influence over the AKP deputies who believe the former ministers should be impeached.

“The immediate call by Samil Tayyar of the AKP for the traitors to be found, however, is meaningful. As an experienced parliamentary correspondent, he has seen that the AKP’s parliamentary group has run out its shelf life, and that Erdogan is not preparing just a new window for the party but a whole new shop,” Yetkin wrote.

Taha Akyol, a veteran columnist for Hurriyet and an expert on judicial matters, believes that it is important that over 40 AKP deputies voted for the four former ministers to be sent to the Supreme Council.

Akyol also suggested, however, that it was also significant, “despite the ease with which accusations of treachery are being leveled, that no one from the party has come out to object loudly and say, ‘This is not treachery but a legal opinion.’”

The only party member to speak out in favor of the AKP mavericks was Mehmet Ali Sahin, a former justice minister under Erdogan’s premiership. Sahin, who is also a deputy head of the AKP, said it was not normal for one of the accused former ministers, Zafer Caglayan, to wear a wristwatch (a Patek Philippe 5101G) worth 700,000 Turkish lira (around $300,000) when the minimum wage is only 1,000 Turkish lira ($425).

He added that the AKP mavericks were reacting to such revelations and to the published transcript of a telephone conversation in which another of the accused ministers, Egemen Bagis, allegedly made fun of the Quran to a journalist.

Meanwhile, Erdogan and Davutoglu have remained low-key on the topic. Asked about the maverick AKP votes, Erdogan said, “I would have expected you to ask me instead why the 276 votes needed for the Supreme Council were not secured.”

Davutoglu, on the other hand, tried to turn the tables on the opposition. When asked the same question, telling reporters, “Our friends in parliament vote on their free will.”

He added, “But if the opposition voted as a bloc, this means that a group decision was made, which is not legal, or pressure was applied, which is contrary to the spirit of this process.”

The bottom line is that while the AKP mavericks may have ruffled Erdogan and his supporters within the AKP, they have not shaken them, but provided them with a reason to reshape the party in a manner that facilitates Erdogan’s political ambitions after the June elections.