The selection of President-elect Recep Tayyip Erdogan's replacement as AKP leader may create turmoil in the party's ranks. 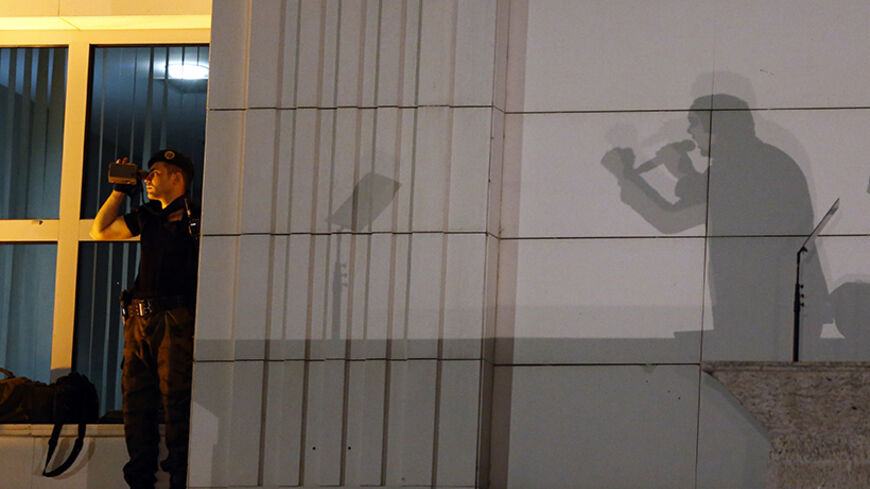 A member of Turkey's security forces watches as Prime Minister Recep Tayyip Erdogan casts a shadow as he addresses supporters in front of his party headquarters in Ankara, Aug. 10, 2014. - REUTERS/Murad Sezer

Turkish Prime Minister Recep Tayyip Erdogan is the clear winner of the Aug. 10 presidential elections and will become Turkey’s 12th president. Debate will continue, however, as to whether this was a fair win, since Erdogan used all the advantages of his position during his campaign against his rivals.

Even US State Department deputy spokeswoman Marie Harf said on Aug. 11 that the Organization for Security and Cooperation in Europe (OSCE) had pointed to this issue in a preliminary report before the elections. She indicated, on the basis of that report, that the candidates were generally able to campaign freely and that freedoms of association and assembly were respected.

Harf reminded listeners that the OSCE had said, “The use of his official position by the prime minister as well as biased media coverage gave him a distinct advantage over the other candidates.”

The point, however, is moot at this stage. There is nothing that can overturn Erdogan’s victory.

A second look at the results of the elections, however, indicates that Erdogan’s leadership ambitions could face a serious uphill battle. Meanwhile, the question of who will take over the leadership of the ruling Justice and Development Party (AKP) after Erdogan has already started to cause ripples within the party.

If this transition does not go as smoothly as Erdogan wants, it will work to his disadvantage. He needs a unified party to enter the general elections slated for 2015 for his one-man-rule ambitions to be realized.

The problem for Erdogan in this regard lies in the Aug. 10 election results. Taha Akyol, a widely respected Hurriyet columnist, noted in his Aug. 11 column that the 52% of the vote Erdogan won shows clearly that the presidential system he wants to establish in Turkey is not possible.

According to Akyol, this result, and the results of the March local elections, show that the AKP’s popular support has crystallized around the 50% mark. Akyol also underlined the fact that millions of citizens could not be bothered to vote in the presidential elections.

Those who did not vote number about 13 million, with 2.8 million in the city of Istanbul alone failing to turn out. Akyol and others argue that this situation actually worked to Erdogan’s advantage, and maintain that if the turnout had been higher, Erdogan may not have won the first round of the elections.

The main point, however, is that if the AKP’s vote has indeed topped out at 50%, this means it will not be able to win the two-thirds majority of seats in the next parliamentary elections necessary to amend the constitution without support from other parties.

This, in turn, means that Erdogan’s presidential ambitions will remain unfulfilled and he will be effectively “trapped” in the presidency by the limits stipulated by the present constitution. This is the last thing Erdogan wants, with his openly declared ambition to become an executive president.

These developments are therefore already providing serious food for thought for Erdogan and AKP executives, who have had to end their victory celebrations early and are now focused on the question of the AKP’s new leadership.

The fact that outgoing President Abdullah Gul has declared his intention to return to the AKP has complicated what is already a difficult question, even resulting in previously unheard-of angry exchanges between prominent AKP deputies.

The AKP will now try to undo this knot in the extraordinary convention it has called for Aug. 27. But even the selection of this date has fueled negative speculation about the party's unity.

Gul will officially give up his post as president on Aug. 28, which means he cannot be nominated as a candidate for the AKP’s leadership at the convention unless he resigns before that day, which is highly unlikely. Some claim that the date for the convention was selected with precisely this consideration in mind.

Journalists close to Erdogan have suggested that Erdogan is not keen on seeing Gul as the leader of the AKP, and consequently as the prime minister, because he needs a compliant figure in these posts once he becomes president. Gul is unlikely to be so docile, given his political stature.

Gul also has the handicap of not being an elected member of the AKP, even though he is a founding member of the party. Sources close to the presidency are not discounting the possibility, however, that Gul may vie for the party’s leadership after he is elected a deputy from the party in the next elections.

This means that the AKP will effectively have a caretaker leader until then who will do Erdogan’s bidding. But this person has to also be able to keep the party unified and make it even stronger in parliament than it is today so that it can tailor the new constitution that Erdogan needs.

Foreign Minister Ahmet Davutoglu’s name is emerging as a likely candidate, but he is not the only one. Another name that comes up in recent days is that of Ali Babacan, the deputy prime minister in charge of the economy, a man widely respected as an honest and level-headed politician.

But Babacan has not seen eye to eye with Erdogan on key issues — for example, the need to keep the Central Bank free of government interference, which Babacan has strongly supported. There are many who argue therefore that Erdogan would not want to see him as AKP leader and prime minister.

Whether Davutoglu, whose foreign policy administration has been marked by more failures than successes to date, could keep the party unified is another question many analysts are asking. Clearly there is a problem in all this for the AKP.

Tellingly, even the declaration by Gul — a widely respected name within the AKP’s rank and file — that he will return to the party after leaving the presidency has created acrimony among key AKP deputies.

Samil Tayyar, the outspoken deputy from Gaziantep, indicated his opposition to Gul in a tweet, claiming Gul had not stood by Erdogan and the AKP sufficiently during last summer’s Gezi Park protests against the government, and after corruption allegations were leveled against Erdogan and members of his Cabinet.

Tayyar angrily and poetically referred Gul's explanation of why he will be returning to the AKP as “remarks that take the mind prisoner and lay ambition bare to the eye,” going on to suggest that there is no place for Gul in the party.

The equally angry response to Tayyar’s remarks came from Salih Kapusuz, a deputy head of the AKP who, without naming Tayyar, said in a tweet, “Being an AKP deputy should not encourage anyone to issue such uncontrolled and rude statements.” Tayyar countered immediately, saying, “Political parties are not the private farms of anyone’s father.”

With such colorful language already flying around publicly among AKP deputies, it is clear that party executives are worried, and that Erdogan himself is being deprived of enjoying his electoral victory to the full as he is aware that his party may drift into turmoil and his presidential ambitions may not be realized the way he wants.