Will Davutoglu ever emerge from Erdogan's shadow?

Having been forced into a secondary role, Turkish Prime Minister Ahmet Davutoglu merely implements what President Recep Tayyip Erdogan decides — but for how long? 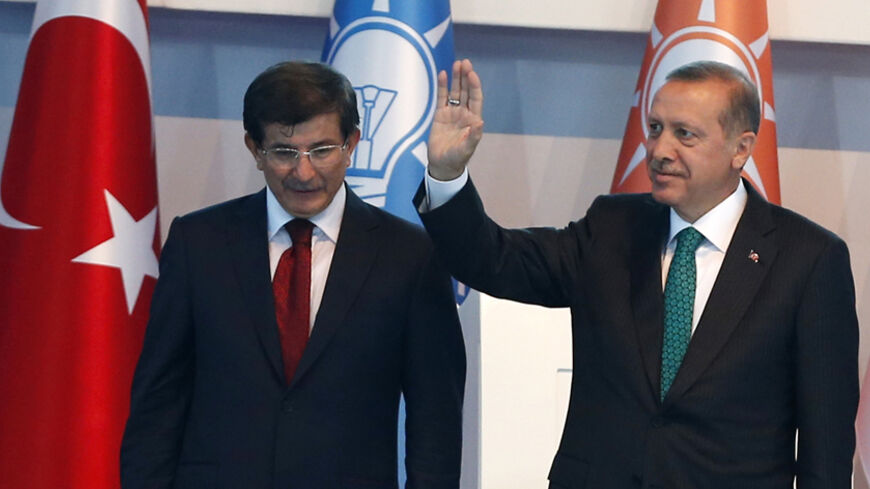 Turkey's President-elect Recep Tayyip Erdogan (R) and incoming Prime Minister Ahmet Davutoglu are seen on stage together during the Extraordinary Congress of the ruling Justice and Development Party in Ankara, Aug. 27, 2014. - REUTERS/Umit Bektas

Since Recep Tayyip Erdogan became president in August, following Turkey’s first direct presidential election, eyes are on his relationship with Ahmet Davutoglu, his replacement as prime minister. Their relationship under normal circumstances would not be a major issue, even though Turkey has witnessed strained ties between the president and the prime minister in the past.

The role of the president as the head of state, with important but no executive powers, and the role of the elected prime minister as the head of the executive branch of government, are clearly defined under the Turkish Constitution. Erdogan, however, never made it a secret that he wanted to become Turkey’s leader in a manner that goes beyond the traditional role of Turkish presidents.

Erdogan also made it apparent, regardless of what the constitution says, that his legitimacy would rest on the will of the people. Prior to the presidential election, he openly told his supporters that the nation would be electing its leader.

According to Erdogan, the 52% of the vote he got in the first round of the ballot on Aug. 10 gave him the legitimacy he was seeking.

Meanwhile, leading members of the ruling Justice and Development Party (AKP) have openly declared that Turkey is headed for a presidential system, and that the aim of the AKP is to facilitate this.

Erdogan is focused on the general elections planned for June 2015, when he wants the AKP to not just win again, but also to gain the majority required to amend the constitution by referendum, and thus introduce a presidential system.

While the AKP is slated to win the elections, there are serious doubts that it will obtain the necessary numbers to fulfill Erdogan’s desire. The question then arises as to what Davutoglu’s role as prime minister will be in the future.

Davutoglu was selected by Erdogan to replace him as head of the AKP, and consequently to assume the premiership. Since becoming prime minister, Davutoglu is trying to show that he is the elected head of the executive branch of government, who is working deferentially with Erdogan, the democratic choice of the people for president, while not being blatantly subservient to him.

This, however, puts Davutoglu in an almost impossible position given the AKP’s declared aim to make Erdogan Turkey’s first executive president. Put simply, Davutoglu is in the ironic position of being a prime minister whose mission is to reduce the importance of his office to the advantage of the president.

In the meantime, Erdogan has already been stealing Davutoglu’s thunder. It is clear, for example, who Washington considers to be its main interlocutor in Turkey. Under normal circumstances, Barack Obama, as the president of the United States, should be calling the head of the Turkish government, Davutoglu.

This is what Obama did when Erdogan was prime minister. Since Erdogan became president, however, Obama has broken this rule. He has been going over Davutoglu’s head and calling Erdogan to discuss important regional matters.

US Vice President Joe Biden has been doing the same, thus providing an added indication of who Washington believes is calling the shots in Ankara. Daily Milliyet quoted Mark Stroh, a spokesman for the National Security Council in Washington, who tried to defend this situation by saying it was normal for Obama, as head of state, to call Erdogan in his capacity as head of state.

Davutoglu has not, of course, given any indications whether he considers this state of affairs “normal,” and is not in a position to do so, even if he is disturbed by it.

But Taha Akyol, a constitutional expert and a widely respected veteran columnist, believes that this state of affairs is not normal for Turkey.

“This is not constitutional, but Erdogan has the power of having been elected by the people behind him. Davutoglu is in a secondary position when it comes to taking decisions,” Akyol told Al-Monitor. “Basically Erdogan is deciding and Davutoglu is implementing decisions.”

Akyol said it was wrong to expect Erdogan, given his well-known nature, not to involve himself with governance and political matters just because he became president. He recalled that Erdogan had gotten actively involved in the organization of the AKP’s extraordinary congress after he was elected president, even though the president is meant to be above party politics.

Murat Yetkin, the editor-in-chief of Hurriyet Daily News, and another highly respected commentator on political affairs, also doubts that Erdogan can confine himself to carrying out the traditional functions of Turkish presidents as head of state.

Pointing to the general elections in June 2015 that the AKP is preparing for, Yetkin questioned whether it was reasonable to think that Erdogan would not exercise his influence in determining who the AKP’s candidates should be.

“Is it realistic to expect that if Erdogan does not want a particular individual on the AKP ballots, including every single person in the AKP today, he or she will still have a chance to compete in the 2015 elections?” Yetkin asked.

This does not say much of course for Davutoglu’s authority in the party he is supposed to lead. Akyol does not discount the possibility, therefore, that the honeymoon period between Erdogan and Davutoglu may end after the general elections, with Davutoglu starting to become more assertive as the elected head of the executive branch of government.

The paper alleged that when told about the matter, Erdogan responded, “This can’t go on; we have to urgently move to a presidential system.” According to another rumor in the press, Davutoglu tried to convince Erdogan recently that the international community’s focus was not currently on Syrian President Bashar al-Assad, indicating that Ankara should act accordingly in determining its Syrian policy.

He reportedly failed to get Erdogan to tone down on his vocal hatred for the Syrian leader. These rumors have yet to be corroborated, although many believe in the old saying that if there is smoke there must be fire.

Meanwhile, Akyol is among those who believe that introducing a presidential system to Turkey will be harder than some assume. Asked what this will do to Erdogan’s plans for the future, Akyol believes that if a presidential system cannot be introduced, Erdogan will still carry on as he is doing today by relying on the support of the people.

This possibility does not portend well for Davutoglu’s political future, either. There is, however, another scenario being voiced for Davutoglu if the AKP manages to turn Turkey into a de jure presidential system under Erdogan. According to this, Davutoglu will become vice president and also function as Erdogan’s foreign minister.

The bottom line is that uncertainty prevails about Davutoglu’s political future. The only thing for certain from today’s perspective is that Erdogan’s future seems much more secure than his.