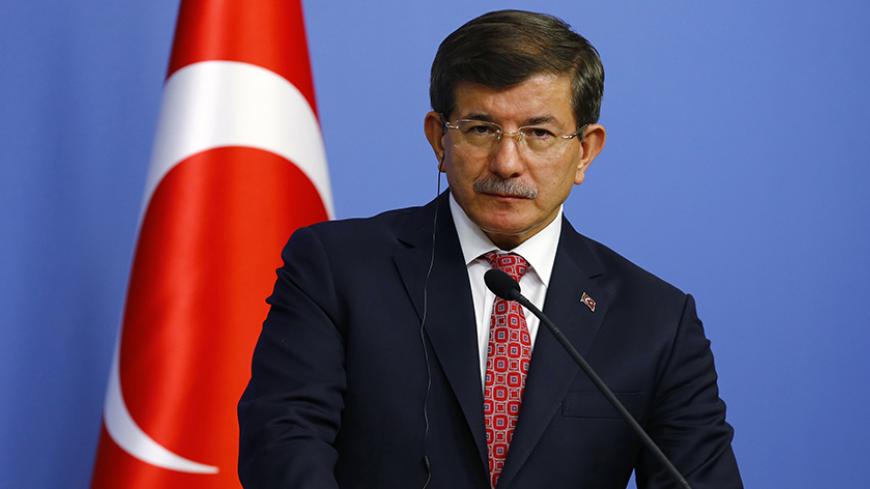 An appointee of President Recep Tayyip Erdogan, Ahmet Davutoglu has been Turkey’s prime minister for more than five months — long enough for one to form a sound opinion about his premiership and get a good idea of how his relationship with Erdogan, Turkey’s strongman, works. Davutoglu’s premiership style and the limits of his power have been determined by this very relationship. Looking at the Erdogan-Davutoglu equation, we’ve been able to predict where Turkey is headed.

Davutoglu may have sincerely hoped to make a difference as Erdogan’s successor and be a real prime minister. But Erdogan, the very person who put him in the prime minister’s seat, has kept Davutoglu from pulling it off and proving himself.

Had Davutoglu managed to assert himself, his main difference from Erdogan would have emerged in the realm of fighting corruption. He had hinted he would not object to a Supreme Court trial for the four former ministers who were forced to quit in December 2013 after a large-scale corruption probe produced evidence of their involvement in bribery and influence peddling. He went even further, vowing several times to “break off the arm of anyone who gets involved in corruption, even if it is my brother.”

Davutoglu and Erdogan were clearly at odds on this issue. Using his clout behind the scene, Erdogan made sure that the parliamentary commission investigating the four ex-ministers, dominated by the Justice and Development Party (AKP), voted against a Supreme Court trial. On Jan. 20, the issue came to the general assembly’s agenda, and the main opposition Republican People’s Party (CHP) submitted a motion insisting on a Supreme Court trial for the four — Egemen Bagis, Zafer Caglayan, Muammer Guler and Erdogan Bayraktar, the former ministers respectively for EU affairs, the economy, the interior and urban affairs. The AKP parliamentary group succeeded in voting down the motion, even though some of its members broke ranks.

Since then, Davutoglu has not spoken of “breaking off arms.” His attempt to cleanse the party of the corruption legacy of the Erdogan era failed because that era had never ended. It is continuing in another form. Erdogan himself misses no opportunity to assert his presence and clout over the government, forcing the limits of his constitutional powers.

On Jan. 19, Erdogan convened Davutoglu’s Cabinet in his new presidential palace. He did so using a constitutional provision that allows the president to chair Cabinet meetings in extraordinary conditions such as natural disasters, epidemics, serious economic crises or armed uprisings, although none of those circumstances seemed to exist. It was a show of force.

A photo taken at the start of the meeting caught Davutoglu sitting with a long face on Erdogan’s right. His sullen visage, which became the most memorable thing about the meeting, must have not been a coincidence, for he went to the meeting without saying anything supportive about convening the Cabinet in the presidential palace.

In an equally remarkable stance, Davutoglu has withheld any comment in support of the “presidential system” to which Erdogan aspires. This “deficit” did not escape the attention of the person who had put him in the prime minister’s seat. Erdogan reacted to Davutoglu’s silence on Jan. 26 in remarks to journalists accompanying him on a flight back from his Africa tour. “I believe that it [the presidential system] is one of the most important theses that Ahmet Bey also needs to defend. This is an issue we have brought up for the new constitution. I think it’s also one of the discussion topics for the coming elections.”

In his most recent move to contain Davutoglu, Erdogan blocked the prime minister’s “transparency package” that aimed to expand the scope of politicians required to report personal wealth and to tighten supervision.

The package, which Davutoglu announced on Jan. 14, was designed to show that the prime minister did not acquiesce to corruption. The planned measures would have included the provincial and district chairs of political parties among officials required to report their movable and immovable properties, while shortening the reporting period from once every five years to once every two years.

Erdogan’s reaction was quick and assertive. “If you expand the property reporting requirement down to provincial and district chairs, you’ll end up with no one willing to take the job,” Erdogan said the day after Davutoglu announced the plan. Moreover, he implicitly criticized Davutoglu for announcing the package without consulting him, saying, “The consultation mechanism between the presidency and the prime ministry is not sufficiently employed. This mechanism has not been really used, except for one issue. To ensure consultation and harmony, we need a presidential system.”

Erdogan then took action. He met with Davutoglu and made sure that the package was postponed until after the June 7 elections.

In sum, Davutoglu, who, under the constitution is supposed to “execute the government’s general policies” as prime minister, has failed to finalize any initiative that lacks Erdogan’s consent. Readers would notice that all of Erdogan’s obstructions mentioned in this article occurred in mid-January. Hence, January 2015 marks Erdogan’s explicit imposition of his tutelage on Davutoglu.

How Davutoglu’s tragedy unfolds will depend on the outcome of the general elections. His current impotent position under Erdogan’s unabatedly powerful presence seems to be the best possible scenario for him in the prime minister’s seat.

Three possibilities will shape the course of Davutoglu’s tragedy. The first is the possibility of the AKP winning a three-fifths parliamentary majority of 330 seats, which would allow the party to unilaterally rewrite the constitution and take the draft to a referendum. This would effectively mean that Erdogan would change the constitution to his liking, pass it through parliament and put it to a popular vote. A “yes” vote would also terminate Davutoglu’s on-paper authority to “execute the government’s general policies” since all powers would be concentrated in the president’s hands. As long as Erdogan is around, Davutoglu stands no chance of becoming president.

And if the AKP triumphs in the polls, will Davutoglu be able to claim the victory as his own, being the man in both the prime minister’s and party chairman’s seat? Will he be able to rejoice and comfortably say, “I was an appointed prime minister, now I’ve become an elected one”? This is an unlikely prospect because Erdogan, breaching his constitutional impartiality, will hold rallies across the country to drum up support for the AKP, which would mean he would take all the credit for any eventual victory at the ballot box. Erdogan, rather than Davutoglu, would be portrayed as the election winner.

The possibility of the AKP winning less than 276 seats in the 550-member parliament, thus losing the majority required for a single-party government, looks unrealistic in the current circumstances.

Yet, if the AKP loses blood and falls below the psychological benchmark of 300 seats while still keeping a hold on power, this would certainly be seen as a failure. In that case, Davutoglu could end up paying the price, for Erdogan would be the arbiter to decide who had flopped. The president could well task someone else to form the new government, namely his “confidant” Hakan Fidan, the former intelligence chief who resigned last week to run for parliament.

Any scenario in which the AKP stays in power with less than 330 seats will mean an end to Erdogan’s ambitions to rewrite the constitution to install the authoritarian regime he yearns for. Erdogan is already de facto running Turkey, almost daily breaching the constitution, which requires him to be an impartial and non-liable figure. Given these circumstances, Davutoglu’s impotent position will change little if he remains prime minister after the elections.

Erdogan picked Davutoglu as prime minister because of their perfect complementarity. Erdogan is a strong and charismatic leader with organizational skills that Davutoglu lacks. Davutoglu, for his part, is an ideologue. He tries to persuade. Erdogan dislikes negotiation. He is a man of action who likes to use power. Erdogan is intuitive, Davutoglu is analytical. Erdogan is a good rally orator, Davutoglu is a salon speaker.

All those complementary traits made for a well-functioning symbiosis until recently. The only hitch that caused a disconnection rather than an attraction effect was the big egos that both men have. Davutoglu’s mistake was to fail to control his ego and be carried away by dreams he could be a real prime minister. Erdogan’s victory in the clash of egos is only a natural outcome.