Will Erdogan’s big gamble pay off?

Surveys suggest there is no certainty that early elections will produce the results Erdogan is banking on for his leadership ambitions. 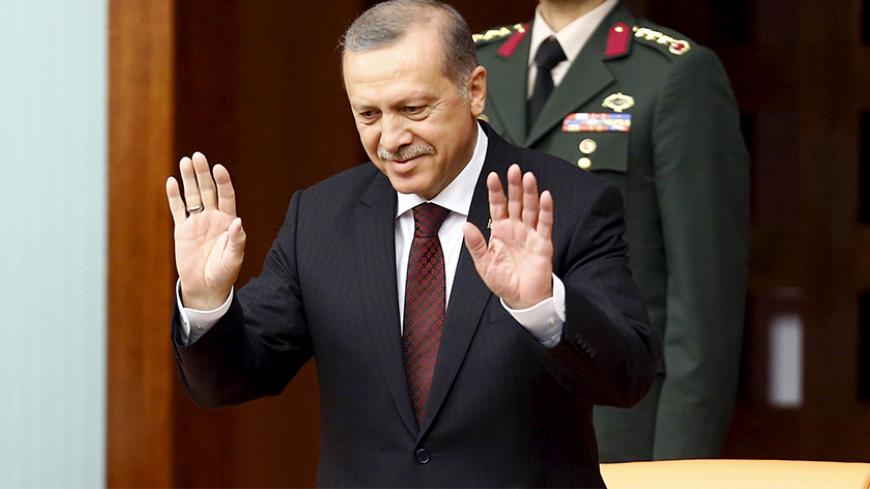 Turkish President Recep Tayyip Erdogan greets legislators as he arrives at the Turkish parliament to watch a ceremony in Ankara, June 23, 2015. - REUTERS/Umit Bektas

Despite his weakened position following the June 7 elections, which saw the Justice and Development Party (AKP) he once led lose its parliamentary majority, President Recep Tayyip Erdogan is continuing with his efforts to show who is boss when it comes to crucial political decisions in Turkey. In doing so, however, he is also continuing to disregard the Turkish Constitution and the political propriety required of him as president.

Pre-empting Prime Minister Ahmet Davutoglu, Erdogan announced last week that the country would be holding early elections Nov. 1. Under normal circumstances, this announcement should come from the head of the government. Turkey, however, is currently in the throes of unprecedented circumstances.

By making his announcement, Erdogan embarrassed Davutoglu once again by showing who is calling the shots. He also disregarded the need to wait for the end of the constitutionally mandated 45-day period after elections for party leaders to try to form a coalition government. Moreover, he felt no need to let the Supreme Electoral Board hold its normal contacts with party leaders before an election date was announced.

Talking to reporters in Ankara on Aug. 20, Erdogan claimed he was acting within the limits of his authority and said he would not allow a waste of time, seeing as Davutoglu’s efforts to form a coalition had failed. “Is there the need to waste time? Can the president take the country to elections? He can. As president, I will meet the speaker of parliament on Monday, which is the end of the 45-day period, and we will take our country to early elections,” Erdogan said, and announced the election date as Nov. 1.

Erdogan appears to be going through the motions of what is required under the constitution. He says he will wait for the end of the mandated 45-day period and discuss the best date for elections with the speaker of parliament. For his critics, however, his pronouncing an election date reveals a thinly shrouded attempt to control the political environment.

At the time that Erdogan made his announcement, Davutoglu was still trying, technically speaking, to come up with a government formula with the opposition that would prepare the country for early elections to be held at the most appropriate time given a set of domestic and international factors. As it turned out, this effort of Davutoglu’s also failed, providing Erdogan with more justification to advocate his line of action.

Erdogan has made it clear from the start that he wants early elections. He believes these will result in the AKP regaining its parliamentary majority and enable it to form a government on its own. Many argue Erdogan needs this to maintain his semi-legal exercise of executive powers, even if the AKP can’t garner sufficient votes to amend the constitution and make him Turkey’s de jure leader.

Meanwhile, Erdogan has been amplifying the angry tone of his rhetoric against the pro-Kurdish Peoples’ Democratic Party (HDP) by accusing it of conspiring with the outlawed Kurdistan Workers Party (PKK). The HDP passed the 10% electoral threshold June 7, dashing Erdogan’s hopes of a solid victory for the AKP that would enable it to fashion a constitution to suit his political needs.

Following the June elections, there has been a sudden upsurge in violence between the PKK and Turkish security forces, with developments suggesting a return to the “bad old days” of the 1990s for predominantly Kurdish eastern and southeastern Turkey. The killing of soldiers and policemen by the PKK is also inflaming anti-Kurdish sentiments among Turks.

The HDP and the Republican People's Party (CHP) believe Erdogan is stoking this violence to scare voters who drifted away in the June elections back to the AKP. Early polls, however, indicate that if this is the intention, then Erdogan’s gamble could backfire. While some surveys show that the AKP could regain its parliamentary majority by a slim margin, others indicate that it will lose again.

A survey by the Sonar polling company in early August showed support for the AKP going up by 2%, from the 40.8% it got in June, and support for the HDP’s going down by 3% relative to the 13.1% it got in June. The increases in polling numbers for the CHP, which got 24.9% in June, and the right-wing Nationalist Action Party (MHP), which got 16.3%, are each less than 1%, according to this survey. Sonar president Hakan Bayrakci believes the AKP has a chance of regaining its parliamentary majority in early elections.

Ilnur Cevik, who is a member of the AKP and a columnist for the pro-government daily Sabah, said Erdogan’s strategy could work. “Unlike other parties, a slight increase in the AKP’s vote will enable it to come to power on its own. That is all it needs to keep attempts at reviving corruption investigations against Erdogan and the AKP from resurfacing,” Cevik told Al-Monitor. He added that Erdogan was relying on disappointed voters, who supported the HDP and MHP in June, and on pragmatists, who he believes will also vote for the AKP as the only chance for stability in the country.

Erdogan is no doubt also relying on Turkey’s system of proportional representation to work to the AKP’s advantage in early elections, since the votes of a party that fails to pass the 10% electoral threshold go to the party that got the highest vote in an electoral district. This is why forcing the HDP under the threshold is more crucial for Erdogan than attracting voters to the AKP from the CHP or MHP.

Ozer Sencar, the founder of the Metropoll polling company — which the AKP relied on in the past — believes, however, that the HDP will increase its votes in early elections. Discussing the results of their latest survey — expected to be announced this week — with the daily Cumhuriyet, Sencar said there is only a 1% increase in polling for the AKP.

He indicated that this would translate into only one extra deputy for the AKP, still leaving it short of the number needed to form a government on its own, he said. “The increase in the CHP vote is not significant, representing one or two more deputies for the party. There is a slight drop in the MHP vote. So, statistically speaking, there is no significant change in the votes of these three parties,” Sencar said.

He added, however, that there is a noticeable increase in support for the HDP. “The HDP could become the third party if elections were held last Sunday,” Sencar added, arguing that Erdogan and the AKP had engineered this situation. “If the HDP becomes the only party for Kurds, who represent 17-18% of voters, this would pose a threat for the future of the Turkish Republic. I believe Erdogan is the one to blame for this,” Sencar said, indicating that it was crucial for the AKP to regain the Kurdish votes it has lost.

More bad news for Erdogan was provided by the daily Hurriyet. Digging into its archives as far back as 1954, Hurriyet showed that governments that had called for early elections in Turkey had always lost these elections. How Erdogan expects to break this cycle, and what he is really banking on when forcing early elections, is still not clear to many, despite the optimistic predictions of AKP sources.

Even an astute observer of Turkey’s political scene such as Murat Yetkin, the editor-in-chief of Hurriyet Daily News and a widely read columnist for the daily Radikal, appears baffled on this score. “It is obvious that Erdogan is relying on the HDP to be pushed below the electoral threshold, but how he expects this to happen is not all that clear,” Yetkin told Al-Monitor. “We have no rational explanation for what he is doing, other than assuming he is relying on something that will change the situation in his favor. But what that is, no one knows,” he added.

It seems the jury will be out until election day. What the foreseeable future holds for Turkey, however, is easier to predict. Political and economic uncertainty, as well as tensions along the Turkish-Kurdish and secularist-Islamist fault lines, appear set to continue as long as Erdogan is determined to become the country’s sole leader.