How Turkey's pollsters missed the mark on election predictions

There are several reasons why all the major polling agencies performed so dismally in predicting the results of Turkey's Nov. 1 elections. 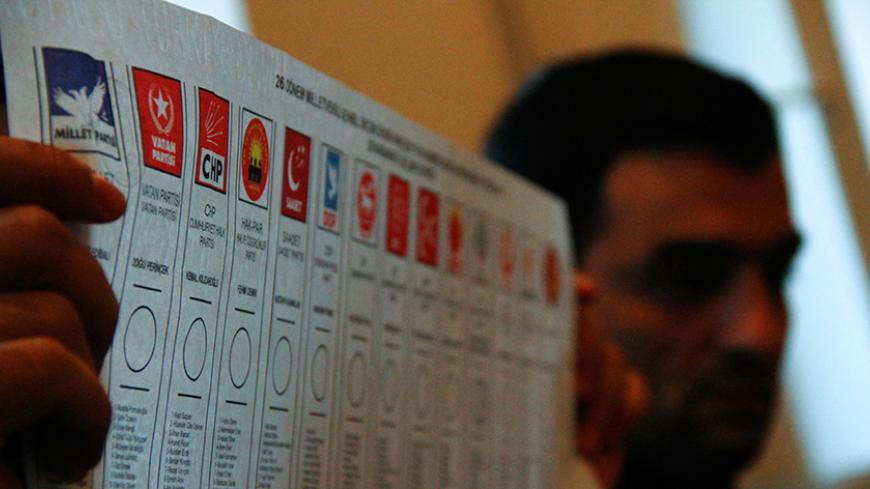 An election official holds a ballot during a count at a polling station in Diyarbakir, Turkey, Nov. 1, 2015. - REUTERS/Sertac Kayar

Add another group to the list of losers in Turkey's general elections: polling companies.

Turkey has provided fertile ground for pollsters, with four elections in less than two years. There are a dozen reputable companies that conduct periodic polls in different parts of the country. Most of these companies published frequent surveys about the snap elections on Nov. 1. Although the majority of them predicted a few points' gain for the ruling Justice and Development Party (AKP), none were able to predict the AKP’s 8.5% rise. The closest prediction came from Gur's A&G Research, which showed the AKP at 47.2%, but the actual results fell outside A&G’s own 1.5% margin of error.

Most of these companies have been in business more than a decade, and most predicted the June election results correctly. How did they fail so badly this time? After talking to activists, scholars, pollsters and the directors of these agencies, Al-Monitor has come up with three main clues to this puzzle.

First, the AKP came out of the June elections with losses, but quietly recouped some of them. Although the pro-AKP media turned several negative results to the AKP’s advantage, that the AKP had lost votes in every province was undeniable. The Turkish public must have concealed its preferences in the polls leading up to the November vote. Al-Monitor spoke with eight pollsters from different agencies who worked in Istanbul and Ankara for both the June and November elections. All were concerned they would not be rehired if their names were published, so their names have been withheld.

One pollster told Al-Monitor that even AKP loyalists were criticizing the party harshly in June and July — and well into August in different parts of Istanbul: "They were calling the AKP leadership insincere and corrupt. But starting in early August, these groups traditionally associated with the AKP stopped being so vocal about their criticism and their preferences.”

Another pollster, from Ankara, told Al-Monitor, “By September, we saw people complaining more about anarchy, the lack of a proper government being formed, and the dollar exchange rate rising.” Indeed, September was precisely when I posed this question in a piece for Al-Monitor: “By November, will those who voted for the HDP [Peoples' Democratic Party] still be loyal to their choice, or will the terror and propaganda effectively work to change their vote?” Since the AKP’s image has been so tarnished with corruption, some voters refrained from revealing their true colors. Potential voters simply lied to the pollsters about their choices because their moral values conflicted with their financial and physical security concerns.

A second cause of this polling disaster was the high percentage of undecided voters. Ozer Sencar, the director of Metropoll Strategic and Social Research Center, told Al-Monitor, “We saw the momentum of the AKP increasing its vote share in our October polls, but we failed to measure the extent of this increase.” Metropoll has a solid reputation and a range of influential clientele in Turkey.

Hakan Bayrakci, director of the Sonar Research Center, said, “It was a serious error. Our research failed to foresee these results. We could not see the undercurrents. We apologize to all our followers, and those who trusted us.”

Murat Sari from the Konsensus Research and Consultancy Agency emphasized that this snap election came only 4½ months after the previous elections. “Our October results indicated the AKP may [have been] on the upswing but we could not see what happened in the last 10 days,” he said. It is illegal to conduct and publish polls in the 10 days before elections in Turkey.

All the directors of the major polling agencies concurred that given the high numbers of undecided voters, they could not determine the sudden change that produced an overwhelming AKP victory. Indeed, neither pundits nor politicians could have predicted the AKP's 49.4% vote share. Metropoll's Sencar told Al-Monitor, “I believe voters' decision-making process lingered until the last day of the election.” He added, “We are still in the process of preparing a post-election report. But we know that about 5% of the voters were undecided until the last week for the June 7 elections; that level reached 13% for pro-Kurdish HDP voters, which corresponds to 1.6% of the total electorate. In the case of the November elections, we can estimate that last-minute decision-makers generated about 6% of AKP’s vote increase.”

One seasoned pollster from Istanbul told Al-Monitor, “Almost every day there was a major event in the news from June to November. It was a roller coaster ride for all us. Voters were literally turned upside down and, when facing such conflicting facts, people in general delay decision-making to the last minute. I had several people I was trying to collect data from asking me, 'Who are you going to vote for?' because people were unsure. One even said, ‘I think I will decide between the HDP and AKP when I get behind the curtain.'”

Professor Murat Guvenc of Kadir Has University told Al-Monitor, “How the undecided voters are distributed in the last polls is crucial, because sometimes you will see a certain ideological leaning will have a high level of representation under the 'undecided' category." Guvenc, who has been studying vote distribution in Turkey for decades, said, "[It is] too early to reach clear conclusions, but I suspect this time the majority of undecided voters were from the AKP’s base; hence their proportional distribution would produce a distorted picture at the end, which is reflected in the polls.”

There were only a few signs of the AKP’s 49.4% victory before the results were announced. Election rallies had rather low turnouts compared with previous elections and people were unenthusiastic overall this time around.

The third factor apparently leading pollsters astray was that there were last-minute alliances between the AKP and small but effective groups that motivated voters.

Initially, the AKP attempted to form official election coalitions with smaller right-wing parties. However, in exchange for their voter blocs, these parties asked to have parliament seats assigned to them. The AKP did not accept those terms.

For example, the Felicity Party (an Islamist party to the right of the AKP) did not agree to join an official alliance with it. However, just a day before the election, the pro-AKP Sabah newspaper announced that the AKP had received the endorsements of the Felicity Party and of the prominent Ismailaga religious order, which is connected with National View (the core Muslim Brotherhood movement in Turkey). These religious orders are known to command crucial voting blocs in Istanbul and various other provinces.

Also, Huda-Par, an Islamist Kurdish party, did not run candidates in the elections. Huda-Par was critical of the AKP before the June 7 elections, but this time the majority of Huda-Par voters opted for the AKP. Huda-Par spokesperson Sait Sahin told Al-Monitor, “The HDP had [influenced] all of society, particularly Kurds, with the threat of causing trouble if they could not pass the threshold [prior to the June 7 elections], and after the HDP got into the parliament and violence escalated, conservative Kurds reverted back to the AKP.”

There were few if any signs available to the pollsters about these backdoor and last-minute alliances of small yet effective groups with the AKP. The unusual and unexpected conditions leading up to the elections not only surprised the electorate and politicians, it tarnished pollsters' reputations. The polling companies will not have an easy time rebuilding their credibility.