How the AKP dominated yesterday's election in Turkey

While the Justice and Development Party was projected to win in Turkey’s Nov. 1 polls, a concurrence of factors led to an unexpected sweeping victory. 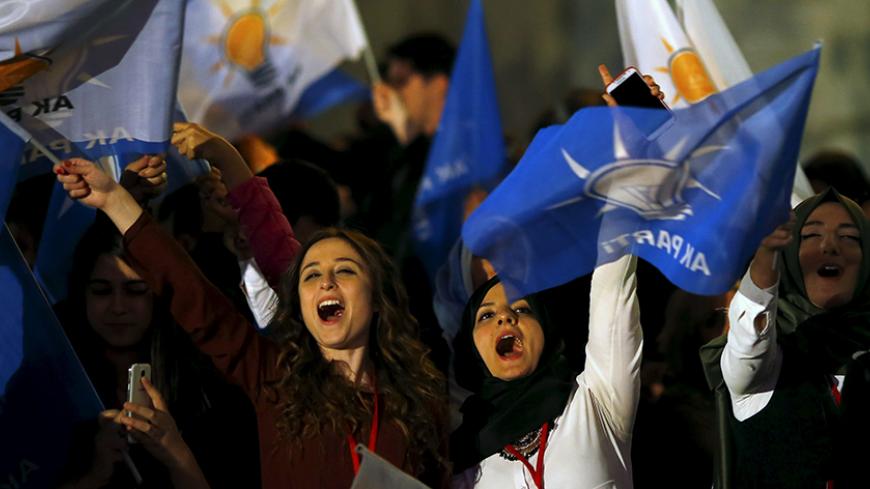 Women wave flags outside Justice and Development Party headquarters in Ankara, Turkey, Nov. 1, 2015. Turkish Prime Minister Ahmet Davutoglu described the outcome of the general election that swept his AK Party back to a parliamentary majority on Sunday as a victory for democracy. - REUTERS/Umit Bektas

Turkey's Nov. 1 snap elections ended with a result that almost no one expected: a crushing, fourth consecutive victory for the Justice and Development Party (AKP), which has now been in power since 2002. The party won 49.4% of the vote, a major increase over the 40.9% it won in the previous elections, held June 7. The AKP has a comfortable majority in the parliament, holding 316 of the 550 seats. It now has enough power to form a government on its own, avoiding coalition scenarios for the next four years. The final seat count, however, fell short of giving the AKP the chance to amend the constitution on its own, which requires at least 330 seats.

How did the AKP pull off such a major victory, defying the predictions of almost all polling companies and political observers? I had predicted “some increase in the AKP votes,” but nothing this major. To understand what happened, one has to look at what changed in Turkey during the past five months, since the previous elections.

The first major change was an upsurge in terrorism, by the Kurdistan Workers Party (PKK) and the Islamic State, and an accompanying sense of diminishing security. The second change was a decline in the economy, in particular a surge by the US dollar at the expense of the Turkish lira. Many critics, in the Turkish opposition as well as the Western media, blamed the AKP government and President Recep Tayyip Erdogan for both of these problems. Many Turks, however, viewed things to the contrary. To them, these problems had been caused by the absence of a strong AKP government since June 7. The 13 stable years Turkey experienced under AKP has helped create a longing for that same stability under yet another strong AKP government.

Meanwhile, two opposition parties faced major problems in the past few months, leading to a significant decline in votes for them. The problem for the Nationalist Action Party (MHP) was Devlet Bahceli, its leader. Bahceli disillusioned a large number of MHP voters by bluntly rejecting every coalition option after the June elections and offering nothing more than hawkishness against Kurdish nationalists. Hence, the MHP turned out to be the biggest loser in the election, having won 16.4% of the vote (80 seats) in June, but only 11.9% (40 seats) in November. It is safe to assume that almost all of the MHP's lost votes went to the AKP.

This was helped along by the AKP consciously playing to the MHP's base, which is already considered the closest to its own. Both parties, by very broad definitions, are right wing and conservative. The AKP's latter-day toughness on Kurdish militants also helped win nationalist hearts and minds. Moreover, the AKP managed to poach a major MHP figure, Tugrul Turkes, the son of Alparslan Turkes, none other than the founder of the MHP movement.

The other opposition party suffering a setback was the polar opposite of the MHP: the pro-Kurdish Peoples' Democratic Party (HDP). In June, the HDP had scored a major victory, safely passing the 10% threshold, winning 13.1% of the votes (80 seats), doubling its traditional mandate. On Nov. 1, however, the HDP only managed to attract 10.7% of the vote (61 seats). Why did it lose so much?

One factor is that some of the votes it had won in June were “borrowed votes” — that is, the votes of people who simply wanted the party to pass the 10% threshold but this time did not vote strategically, assuming that the party would safely pass the threshold. The even more definitive factor was the failure of the “peace process” between Ankara and the armed and outlawed PKK, which both Turkey and the United States consider a terrorist organization. The resurgence of the three-decade-old war in July put the HDP in a tough spot, torn between its liberal narrative of peace and its obvious sympathy for the PKK. As a result, some religious Kurdish voters, who blamed the PKK for the resurgence of violence, returned to the AKP. The HDP lost more than a million of the votes it had won in June, and it appears that almost all of them went to the ruling party.

The AKP also seems to have attracted additional support from the base of smaller Islamist parties, which either shrank (as in the case of the Felicity Party) or did not enter the election to support the AKP (as in the case of the Kurdish Islamist Huda-Par.) The only party that saw no changes was the main opposition Republican People's Party (CHP), which won 25.4% of the vote (134 seats). The CHP seems to have a safe, solid, but static voting block, consisting mainly of urban secularists and unorthodox Alevis.

The election results represent a huge victory for the AKP, and even more so for Erdogan, who was the real mastermind behind the snap elections. His grip on power will be rock solid until 2019. Of course, this is incredibly blissful for AKP supporters, but what does it mean for opposition circles, which have of late been demonized by the government and its propaganda machine as the enemy within? Prime Minister Ahmet Davutoglu, in his victory speech, sent a reconciliatory message to them, promising an “end to polarization and tension.” If he and Erdogan really chose a moderate and reconciliatory path, then they will be achieving a much bigger victory than in the actual elections.