While skeptics of Turkish President Recep Tayyip Erdogan in the Justice and Development Party are still not very vocal, reality seems to be on their side. 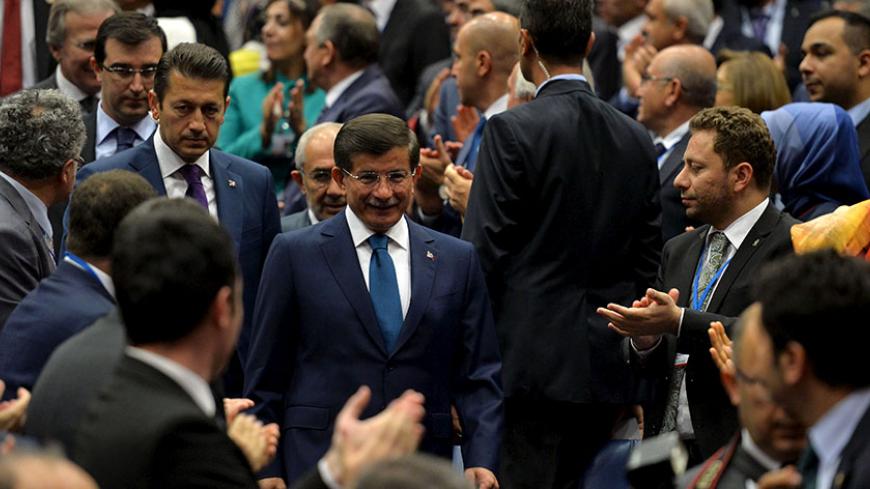 Since Turkey's general election on June 7, the ruling Justice and Development Party (AKP) has been in a visible mood of stress, doubt and soul-searching. The obvious question is why the party had a major setback at the ballots, securing just 41% of the vote, down from 50% in the 2011 elections. There seem to be two major camps, providing two different answers. One of them — the weaker one — very discreetly and respectfully suggests that perhaps some of the excesses of President Recep Tayyip Erdogan and the narrow circle around him are to blame. The other camp — the more powerful and defiant — blames the first camp for being full of potential "traitors" who do not appreciate Erdogan's grandeur and began to unravel at the first sign of trouble.

These camps are not fully revealing themselves, for the AKP has a strong culture of concealing its disputes and presenting the appearance of solidarity to the outside world. We get the scoop thanks to gossip and off-the-record remarks, and see its reflections in the pro-AKP media, in which fierce columnists from both camps — but more so from the uncompromisingly pro-Erdogan one — write angry and often rude rejoinders.

In a nutshell, here are the views of these camps.

The first one, which is more "moderate" by most measures, believes that Erdogan, despite his amazing success over the years, recently "lost it." His rule has become a symbol of corruption, extravagance and sycophancy. His obsession with the presidential system scared the public, whereas his ups and downs in regard to the Kurdish question discouraged many Kurdish voters. They believe that Erdogan needs to be the symbolic president that the constitution defines, and let the AKP form a coalition government. They support Prime Minister Ahmet Davutoglu, while some of them ultimately hope that Abdullah Gul will come back at some point and "rescue" the party.

The second camp, which is more powerful both in the party and the pro-AKP media, is uncompromisingly pro-Erdogan. Erdogan is the savior of not just Turkey but the entire Muslim world, they believe, and they defend him against all enemies and critics. They think the AKP had a setback in the elections because Erdogan was not fully in charge, unlike in the good old days. They accept Davutoglu as long as he obeys Erdogan, but he should not forget who is the real boss. This camp is not eager to form a coalition government, and hopes that snap elections in November can bless the AKP with a parliamentary majority.

These camps are likely to coexist for a while and continue their intra-party struggle. But the one that is critical of Erdogan seems to have the facts on its side. At least, that is what a recent survey by Metropoll, one of Turkey's prominent polling companies, seems to suggest.

A Metropoll survey published July 12 has a particularly relevant question to the discussion above: "What do you think is the real reason for the AKP’s loss of power in this election?" The top five responses are as follows:

With the exception of the Kurdish vote for the HDP, everything that voters pointed out as the main reasons for the AKP's decline are directly related to Erdogan. First, with his feverish speeches during the electoral campaign, Erdogan went against Turkish society's long-held expectations for a president to be a level-headed, respected statesman. Second, corruption also became synonymous with his latter-day rule, as he was the one who saved his four ministers from corruption charges and also blocked the "transparency law” that Davutoglu tried to pass in February 2015. The other answers — insistence on the presidential system and growing authoritarianism — are fully embodied by Erdogan.

Erdogan's extravagant, $615 million presidential palace also played a key role in this negative perception. The media had reported as early as November 2014 that this palace was seen as an unnecessary expense even among some AKP voters, who identified with the more modest Erdogan who used to live in an apartment in Ankara. That is probably also the reason why Erdogan recently renamed the palace a “kulliye,” a term that was used in the Ottoman Empire for a complex where a big mosque is surrounded by a library, hamam, school and kitchen. (But while the modest Ottoman kulliye was dominated by a mosque, Erdogan's lavish palace is predominantly a palace, which is why renaming it did not make sense to many people.)

Ozer Sencar, the general director of Metropoll, argues that these findings provide a clue for the possible elections in the fall — something that Erdogan is known to be aiming for, believing that the setback in the June 7 elections was an anomaly that can be corrected by a return to the ballots. That is an incorrect calculation, Sencar notes, because all the political reasons that helped voters make up their minds on June 7 are still in place. The voters who escaped from the AKP because of Erdogan's authoritarianism, for example, will not go back. Therefore, Sencar reasons, the AKP has no way out other than forming a coalition government with one of the opposition parties.

But there are others who disagree. One common idea in the pro-Erdogan camp is that the AKP only barely lost the parliament majority, and new elections are worth trying, especially when the electorate is disillusioned with political uncertainty. According to one AKP official, only some 90,000 votes in total lost the AKP the parliament majority. (Just 10,000 more votes in Ankara, 13,000 more in Istanbul and even smaller numbers in some other cities could tip the balance in favor of the AKP, and win in the extra 20 seats it needs to achieve a majority.)

The more modest names in the AKP look at these calculations with caution, however. One such moderate figure is former deputy Sadullah Ergin, who warned on a TV interview that renewed elections may not help his party regain the parliament majority. “There are provinces we lost by a small margin, but there are also ones we won by a small margin,” he said. “Moreover, the opposition may now strategically unite in certain provinces and cause us to lose.”

A prominent figure in the pro-Erdogan media who preferred to remain anonymous spoke to Al-Monitor about these scenarios, confirming that Erdogan’s hope is certainly to regain a parliament majority in renewed elections. “But they are calculating the possible outcomes of renewed elections and trying to measure the political trends of the electorate,” he said, with regard to Erdogan’s team at the presidential palace.

Consequently, there seem to be three options for the AKP. The first one is a coalition government — most likely with the Republican People's Party — which would empower Davutoglu and disempower Erdogan. The second is new elections for a regained parliament majority, which would empower Erdogan and re-establish the myth of his invincibility. The third option is new elections without an AKP victory, and even further decline. That would weaken the party itself, and especially Erdogan, who would be blamed for leading the party to disaster because of his own ambitions. Those who criticize him quietly and reluctantly now would become more vocal and more influential.