Erdogan lost a battle, but perhaps not the war

The June 7 elections made Turkish President Recep Tayyip Erdogan’s authoritarian dreams less certain, but it would be naive to think that he has given them up. 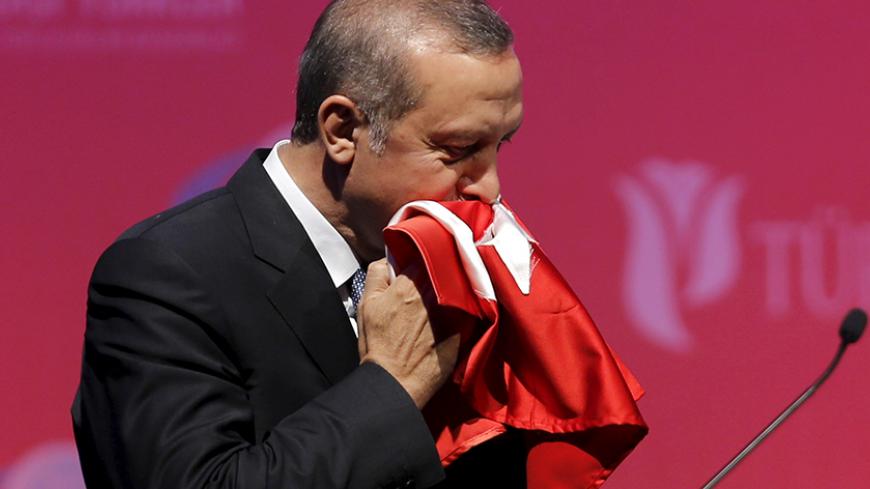 Turkey's President Recep Tayyip Erdogan kisses a handmade Turkish flag, given to him as a gift from Ugandan university student Cemil (not pictured), during a graduation ceremony in Ankara, June 11, 2015. - REUTERS/Umit Bektas

The June 7 elections came as a breath of fresh air for millions of Turks who were worried about President Recep Tayyip Erdogan’s endless temptation for more power. They were not all wrong, for the ballots gave Erdogan’s Justice and Development Party (AKP) its first major setback in 13 years. The party lost nearly 10% of the votes it had received in 2011, and, more importantly, lost its parliamentary majority. This was a lethal blow to the “presidential system” that Erdogan wanted for himself with a tailor-made constitution. Moreover, it was a safeguard against AKP hegemony in the government, legislation, the bureaucracy and perhaps even in the media.

Many secular and liberal Turks celebrated the election results. Articles in the Western media congratulated Turkey for “saving its democracy.” But one should perhaps be a bit more wary and not rush to join this euphoria. Erdogan probably thinks that he has just lost a battle, not the war. And he may be right.

Why? The June 7 elections ended AKP hegemony, but they also initiated an era of uncertainty. Since no party in the parliament has a majority, leaders will now try to form coalition governments. But if they fail to do so or form a coalition government that may be unstable, Turkey will go to the voting booths again. The AKP will be able to tell the electorate, “You see, unless we are in full power, the country descends into chaos.” The Turkish electorate, for which the very term “coalition” is already an alarm signal due to bad memories from the 1990s, could find this argument persuasive.

Here is the road map that awaits Turkey: The Turkish Constitution decrees that after the formation of the parliament — which should be completed June 23-24, when the new deputies take their oaths and officially occupy their seats — 45 days will be allowed for the formation of a government. Then, the president assigns the prime minister post to a member of parliament (typically, the leader of the biggest party), who forms his Cabinet, gets the president’s approval and then obtains a “vote of confidence” from the parliament. In the recent past, all these steps took only a few days, since the AKP had a parliamentary majority and could proceed with no bumps. Now, since no party has a majority, the “vote of confidence” can be secured only when at least two parties agree on the new government. And that can happen only with a coalition — or, less likely, with a “minority government,” with one party supporting another party's government without joining it.

Erdogan spoke to the press June 14 and explained that he will first ask AKP leader Ahmet Davutoglu to form the new government and, if he fails, then would ask the main opposition Republican People's Party (CHP) leader, Kemal Kilicdaroglu. But if both fail in 45 days, Erdogan said, “then going to the ballot box again as per the constitution would be inevitable. I don’t call this a snap election, but a rerun.”

“Snap” (or “early”) elections is something Erdogan has opposed throughout his political life. So his emphasis as a “rerun” was a conspicuous selection of words. More notably, various reports about Erdogan and his inner circle suggest that this “rerun” is the president's Plan A. As suggested in a top story of the daily Taraf on June 12, titled “The latest plan of the palace,” Erdogan was motivated to support re-elections due to a survey held right after the elections by the polling company, IPSOS. The results suggested that in the case of a re-election, the AKP would get 45% of the vote rather than the 41% it received June 7. Some voters, apparently, decided to “punish” the AKP during the elections but are now worried about the instability they may have caused.

A prominent name in the pro-AKP media, with close ties to “the palace,” spoke to Al-Monitor anonymously and confirmed that Erdogan’s goal would indeed be to secure an AKP majority in renewed elections. “But he also needs to avoid looking like a spoiler of coalitions, hence he will give some time to it,” said the source. If the renewed elections do not help the AKP, the same source added, this is no problem — things can’t get much worse. “But renewed elections can help the AKP, and Erdogan is willing to chance that.”

Political commentator Levent Gultekin, who has a history of insights about the AKP world, also agrees with this view. He said that Erdogan’s best ally these days can be the short-sighted opposition leaders who may fail to form a coalition government and thus strengthen the search for stability — stability under the AKP.

The only incurable trouble for Erdogan is that even if the AKP wins a parliamentary majority in renewed elections, the super-majority for amending the constitution (three-fifths of the seats) seems out of reach. So, he would have to work within the current system, rather than introducing the “presidential system.” As a result, Prime Minister Ahmet Davutoglu could consolidate his authority over the party, wresting some autonomy from Erdogan.

Another option, which would be more comforting for the non-AKP segments of Turkish society, would be the return of former President Abdullah Gul to the AKP as its leader. This would write Davutoglu off, confine Erdogan to his constitutional limits and restore the AKP to the more moderate and reformist path it had taken in its initial years. A new and much-acclaimed book by a former adviser to Gul, Ahmet Sever, which exposed all the divergences and tension between Erdogan and Gul, is perhaps a signal of such a “comeback” by Gul.

The June 7 elections certainly made Erdogan’s life more complicated and his authoritarian dreams less certain. But it would be naive to think that he has abandoned them.