The entire Turkish right, consisting of Islamists, conservatives and Turkish nationalists, appears to be united under President Recep Tayyip Erdogan. 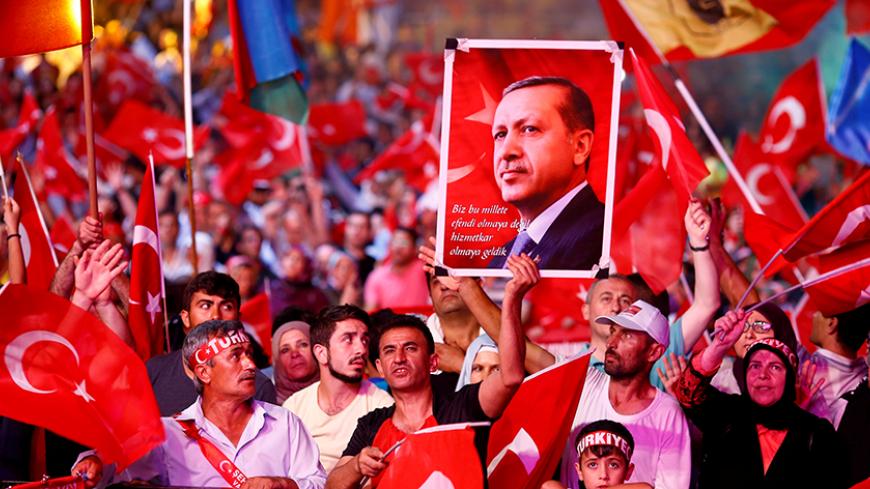 Supporters of Turkish President Recep Tayyip Erdogan wave national flags as they listen to him on a giant screen in Istanbul's Taksim Square, Aug. 10, 2016. - REUTERS/Osman Orsal

Recep Tayyip Erdogan has held power in Turkey since 2002, when his Justice and Development Party (AKP) emerged victorious from parliamentary elections. Since then, first as prime minister and today as president, his popular support has increased with only a few bumps along the road, which he skillfully maneuvered. Now, in the aftermath of the failed coup of July 15, Erdogan seems more popular than ever. A new survey by the polling firm Genar suggests that more than 60% of the electorate supports Erdogan. Public support for his leadership against the coup attempt is at a phenomenal 88%.

The same Genar survey revealed another remarkable statistic: Erdogan’s potential votes in a presidential election increases to 70% of the electorate when the base of the Nationalist Movement Party (MHP) is included. There is currently great sympathy for Erdogan among MHP voters, who apparently may opt for him in the next presidential race. According to another recent poll, support for the AKP stands at 55% of voters, whereas the MHP has 12%. Support for the main opposition secular Republican People's Party (CHP) is holding steady around its usual 25%, whereas the pro-Kurdish Peoples' Democratic Party (HDP) has fallen to 7%.

Such broad support for Erdogan means that his support base is not limited to Islamists, as is sometimes assumed by the Western media. Various surveys, including a 2013 Pew Research Center poll, showed that Islamists — those who favor a state based on Sharia — constitute little more than 10% of the population in Turkey. It is safe to assume that most of these Islamists would today vote for Erdogan’s AKP, hoping that the party will do more in the long run for their cause. Then there is at least another 35% of the electorate, give or take, that also routinely votes for the AKP. They are typically Anatolian Sunni conservatives — who are religious but also pragmatic — who love Erdogan’s religious references along with the social services, highways and shopping malls provided courtesy of the AKP.

The base of the MHP, Turkey’s fourth largest party also consists of Anatolian Sunni conservatives. The only difference between the AKP and MHP bases is that the latter has been more insistent on ethnic Turkish nationalism. It has exhibited stronger enmity toward “Kurdish separatism,” real or perceived, and has always been hawkish against the armed Kurdistan Workers Party (PKK), which Turkey and the United States have designated as a terrorist group.

That is why relations between the AKP and the MHP became strained when Erdogan sought to find a peaceful resolution to the Kurdish question through negotiations with the PKK, from summer 2009 to summer 2015, despite a resurgence of conflict in 2011. Devlet Bahceli, the MHP’s hard-line leader, repeatedly condemned the AKP for “high treason” for negotiating with terrorists rather than wiping them out. In return, Erdogan routinely lambasted the MHP on the grounds of “racism, skull measuring.”

When the peace process finally ended, in July 2015, the gap between the two parties quickly evaporated. Moreover, Bahceli faced an intra-party challenge, against which he responded by allying himself with Erdogan. Today, Bahceli is so close to Erdogan that Prime Minister Binali Yildirim found it safe to announce that a new constitution, based on Erdogan’s preferred “presidential system,” would soon become a reality with the help of the MHP.

As a result, it seems fair to say that the entire Turkish “right” — a spectrum of Islamists, conservatives and Turkish nationalists constituting more than 60% of the electorate — is united behind Erdogan. Such a grand coalition had taken shape only once before, in the 1970s when the three parties representing these three trends — the Islamist National Salvation Party, the center-right Justice Party and the Nationalist Action Party — joined forces on two occasions to form a “National Front.” At that time, the three parties independently continued to follow their own leaders. Now, Erdogan is the leader of the entire right-wing, creating what some have called the third National Front.

There are of course differences between the 1970s and today. In the past, communism was the main enemy of the National Front, while today, it is a broader spectrum of foes, including the Gulenists, leftists, liberals, the PKK and its regional affiliates, and the Western powers allegedly using all these groups as “pawns” to weaken or even destroy Turkey. Lately, some pro-Erdogan pundits have even designated “globalism” as the enemy, putting Erdogan and his cause in the same camp with Russian President Vladimir Putin, Brexiters and US President-elect Donald Trump, whose electoral victory thrilled the whole pro-Erdogan media.

There is also another element in Erdogan’s new grand national front that has traditionally never been close to the country's Islamists or conservatives: the Homeland Party, led by Dogu Perincek, the man who built his political career as the beacon of Maoism in Turkey. After the fall of communism, Perincek turned toward a blend of Kemalism and “anti-imperialism.” He was, in fact, a prominent opponent of the AKP during the party’s first decade, but then began to move closer to Erdogan on the basis of opposing the Gulenists and the alleged Western powers behind them. The Homeland Party’s votes are miniscule, but Perincek still effectively serves the new grand national front through his audacious newspaper, Aydinlik, his people in the bureaucracy and his foreign connections, such as his “friend” Alexander Dugin, a Putin confidant who was recently welcomed by the AKP at the Turkish parliament.

How long will this grand national front last? It is impossible to say with any certainty, but it may prove to be more durable than Erdogan’s past alliances — that is, those with the European Union, the Gulenists, liberals and Kurds. These older alliances came with constraints on Erdogan’s power, but the grand national front is almost totally under his command. In addition, its vote potential is huge and could possibly keep Erdogan safely in power for years, if not decades.

For those Turkish citizens who find themselves outside this grand national front — the pro-CHP secularists, Alevis, leftists, liberals and Kurdish nationalists — this is, of course, bad news. For them, it means they live in a country in which they will always be in the opposition, and given the blunt majoritarianism of the AKP, will always feel marginalized. As a result, some of the most wealthy and educated among them are thinking of emigrating for good, which would be a colossal brain drain, and others simply remain hopeless, a feeling that in the long run could lead to radicalization.

Thus, although the grand national majority might keep Erdogan in power, it will not give Turkey the peace, diversity and creativity it needs to move forward. If Erdogan is really the political genius his followers think he is, he should soon recognize this conundrum and find ways to reach out to the disaffected minority.