A possible tectonic shift in Turkish politics may come via the MHP's inner-party struggle. 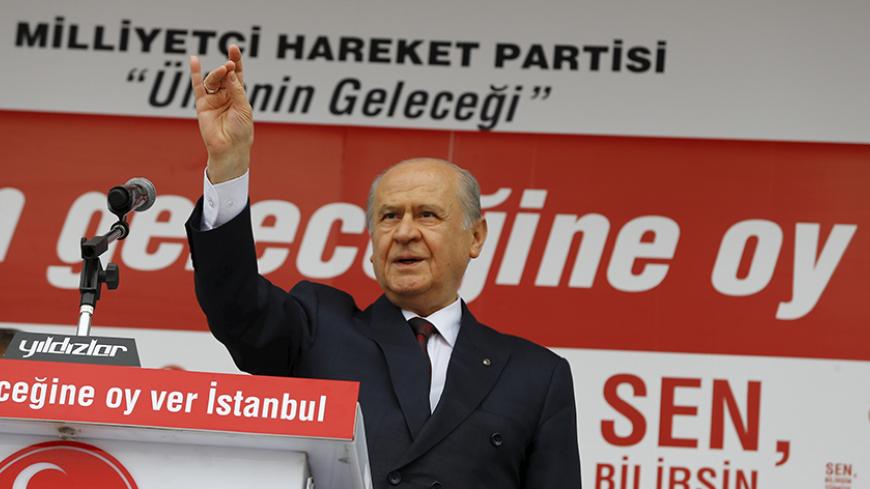 In the past few years, many Turkey observers have focused on the Peoples' Democratic Party (HDP), which is the base of Kurdish nationalism, as the possible vehicle for a meaningful transformation in Turkish politics. These days, however, the party that holds the key to Turkey's political future is the one that lies at the exact opposite end of the political spectrum: the Nationalist Movement Party (MHP), which is the base of Turkish nationalism. The ongoing struggle for the leadership of the fourth-largest party in Turkish politics may determine whether President Recep Tayyip Erdogan's ambition for total power will come true or not.

The MHP is the party that is least known and noticed by the Western media, for it offers nothing "sexy." It is not interested in minority rights, LGBT freedoms, Islamism or anything that makes sense globally. It rather seems like a very parochial party that supports old-fashioned Turkish nationalism, calls for crushing pro-Kurdish terrorism and adds nothing new. Moreover, its age-old leader Devlet Bahceli, who has been the MHP chairman since 1997, inspires no one.

Yet still there is something that makes the MHP a very important party: It is the only one that can steal votes from Erdogan's Justice and Development Party (AKP). Both parties appeal to right-wing or conservative voters, which for decades have roughly made up some 65% of the Turkish electorate. Meanwhile, the left-wing vote, which again for decades has almost never gone above the 35% barrier, is now shared by the main opposition Republican People's Party and the pro-Kurdish HDP.

What is more newsy is that the MHP is now boiling with the open challenge to Bahceli from three younger, more articulate and more promising politicians: Meral Aksener, Umit Ozdag and Sinan Ogan. Especially Aksener, a female politician who has a successful past in Turkey's center-right politics, seems to be a very promising candidate for lifting up the party.

Aksener launched her campaign in late November 2015, soon after the electoral decline of the MHP earlier that month, for which many blamed the uninspiring leadership of Bahceli. The party "must not be stuck in the past and lose the future," she said. Since then, both she and other opposition currents in the MHP have become more vocal and active, calling for a new MHP that can shake up Turkish politics. Word has it that even some AKP moderates, who are disillusioned by the Erdoganist zeal in their own party, are now hoping to see a way out in a "new MHP."

However, there is a problem for all those who wish to see change. According to its bylaws, the MHP is not scheduled to have its next party congress until March 2018. This means that unless calls for an early congress are recognized, Bahceli will keep his seat for two more years. And the MHP will keep on being the same old, boring, uncharismatic party whose votes barely pass the 10% national threshold.

Now, this scenario is great not only for Bahceli, who apparently fears losing the party's leadership, but also for the AKP and Erdogan, who cherish a weak MHP. It is quite clear that in the next two years Erdogan will want to introduce a whole new constitution tailor-made in his endless pursuit for more power. It is also very probable that Erdogan will call for new elections or referenda to realize his grand ambition. If he needs to trust in God for that, along with keeping his powder dry, as the saying goes, he also needs to keep the MHP feeble.

This is why and how an Erdogan-Bahceli alliance has surfaced recently. First, pro-Erdogan media began praising Bahceli's statesmanship and condemning his inner-party rivals as pawns of nefarious conspiracies. This week, Bahceli also joined the show, and vowed that he would not leave the MHP to "the parallels," the latter-day AKP term for the Gulen movement. His rhetoric on this imagined conspiracy so closely mirrored the Erdoganist narrative that it can be taken as a landmark speech that marked the Erdogan-Bahceli alliance.

Meanwhile, it should also be noted that Erdogan himself has come closer to Bahceli on a very important matter: the Kurdish question. The "peace process" that Erdogan initiated in 2013 with the armed and outlawed Kurdistan Workers Party (PKK) was always condemned by Bahceli as "kneeling before terror." But now the peace process is long gone and Erdogan has taken a much more hawkish stance against the PKK, vowing that terrorists will either surrender or be "neutralized," i.e., killed. That must have been not only music to Bahceli's ears, but also convinced him that this is the time to support the state, which is embodied in the persona of Erdogan.

Yet still, it is unclear whether Bahceli will remain as the leader of the MHP until March 2018. The fact that he fervently avoids competition further tarnishes his reputation. Moreover, the inner-party opposition won a legal victory April 8, forcing Bahceli to an early congress, whereas Bahceli called for an appeal of the ruling. So, for the time being, the legal battle will continue along with the struggle to create a formidable political alternative to the 14-year-old dominance of the AKP.