The latest episode in Turkey’s political games sees both the government and the leadership of the opposition Nationalist Action Party (MHP) combine forces to fend off the opposition within the MHP. 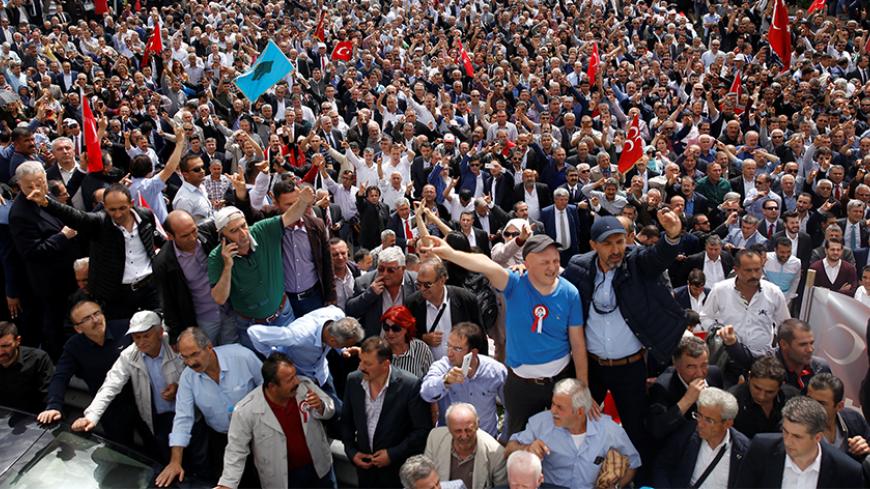 Members of the opposition Nationalist Action Party gather as police seal off a hotel preventing the holding of a party congress in Ankara, May 15, 2016. - REUTERS/Tumay Berkin

On May 15, four prominent politicians of Turkey's third-largest party, the Nationalist Movement Party (MHP), headed to a hotel in Ankara. They had invited thousands of supporters, including hundreds of party delegates, and they were planning to have a "snap party congress," as announced beforehand. But they found the hotel blocked by a squadron of policemen, who were ready to use tear gas and water cannons to disperse them. After a few hours of people shouting and several brief press statements, the politicians and the crowd dispersed; the MHP snap congress did not take place — at least for now.

This news was welcomed by many. First and foremost by Devlet Bahceli, the current leader of the MHP who seems determined to keep his position. He has been the party chair since 1997, but his popularity has rapidly declined in the last year, as his dull leadership is largely seen as the reason for the party's decline in votes, from 16.3% to 11.9% in just five months. An opposition has grown within the MHP that blames Bahceli for keeping the party weak and that says he is guilty of “treason.”

But it was not only Bahceli and his supporters who were delighted to see the MHP snap congress fail; President Recep Tayyip Erdogan’s supporters were also overjoyed, which became clear from the pro-Erdogan media, whose standard-bearer, the daily Sabah, came out the next day with a bold headline: “The MHP’s pirate congress came to an end.” According to the story, all the evil powers that work behind the scenes were disabled and the “plan to create chaos within the MHP” was luckily prevented.

According to the MHP’s opposition figures, however, the powers that worked behind the scenes are none other than the president’s men. The four contenders for Bahceli's job — Meral Aksener, Sinan Ogan, Umit Ozdag and Koray Aydin — explained this in a joint declaration. The legal battle they had launched to organize the congress was interfered by “a phone call from the Justice Ministry.” Based on that, a local court declared their congress-to-be “illegal,” and the Ankara governor mobilized the police to stop the “illegal congress.”

The four politicians declared, “A direct interference by the AKP [Justice and Development Party] in the organization of the congress of the Nationalist Action Party is unacceptable. The internal matters of the MHP have become a matter of the AKP and the government. The mindset that changes a prime minister [Ahmet Davutoglu] in just one hour and takes a decision for its own snap congress in just two hours has trampled on the law to deprive the MHP from having its own snap congress.”

In return, Justice Minister Bekir Bozdag denied the accusation as a “big libel.” Yet many people in Turkey believe that not just the Justice Ministry but in fact “the palace” (i.e., Erdogan) is directly involved in the efforts to block the MHP snap congress and to keep Bahceli in power — and hence the MHP weak. Many people also believe that the Court of Appeals, which has been withholding its decision on the MHP snap congress for weeks, is also under pressure from “the palace.”

Meanwhile, Bahceli is clearly enjoying a rapprochement with Erdogan, his party and his media outlets. According to a pro-AKP commentator, Bahceli even began to speak “as if he were an AKP spokesman.” A joke going around in Ankara says Bahceli made a “presidency-for-presidency deal” with Erdogan: Erdogan will become the all-powerful president of Turkey under a new constitution, whereas Bahceli will keep his seat as the president of the all-weak MHP.

There is even more to this master plan. While the MHP is not allowed to have its snap congress because of legal tricks and even brute police power, the incumbent AKP will have its own snap congress, without a hitch, on May 22. During this event, former Transportation Minister Binali Yildirim will replace Davutoglu as both the party chair and prime minister — for the simple fact that Yildirim has proven more obedient to Erdogan. Meanwhile, based on a parliamentary vote held today, dozens of Kurdish parliamentarians may lose their legal immunity, perhaps to be imprisoned for links to “terrorism,” thanks mainly to the AKP-MHP collaboration in the parliament. This may help the AKP boost its seats in the parliament, which would be immediately used by Erdogan for a new constitution based on a “presidential system.”

In short, every major act in Turkish politics right now seems to be linked to Erdogan’s ambition for more power. His ambition is so strong that it is able to manipulate even the dynamics within an established opposition party such as the MHP.